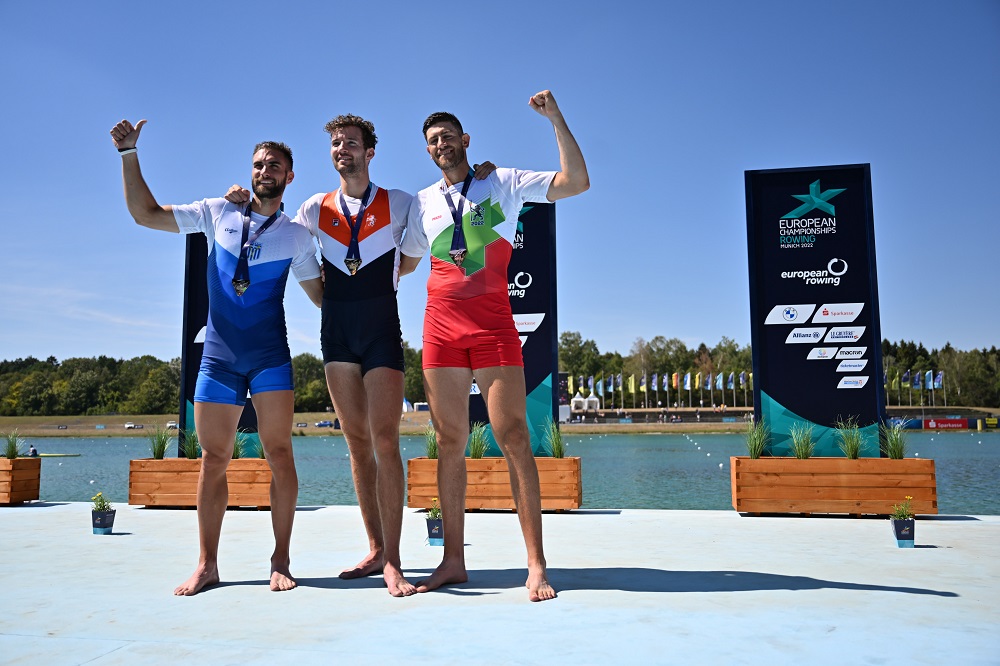 The second day of finals on Munich’s Olympic Regatta course provided another session of incredible racing as more European Champions were crowned. Nine national anthems were heard in total with Romania, Great Britain and the Netherlands all picking up two gold medals.

The final medal table had Great Britain at the top with a total of 10 medals; six gold, three silver and one bronze. Romania claimed eight medals in total with an impressive five of them being gold.

In the para boat classes, the Ukrainian anthem was heard when Svitlana Bohuslavska and Iaroslav Koiuda won the PR2 mixed double sculls in convincing style. In the PR3 mixed coxed four, reigning Paralympic, World and European Champions, Great Britain led from the start to cross the line nearly 20 seconds ahead of France, with Germany claiming bronze.

The Irish Olympic champions, Fintan McCarthy and Paul O’Donovan won the lightweight men’s double sculls while in the women’s boat class, it was another gold for Great Britain when Emily Craig and Imogen Grant got the better of the Olympic gold and silver medallists, Italy and France.

It was no surprise to see Martin and Valent Sinkovic of Croatia winning the men’s double sculls, despite a valiant attempt by Spain’s Aleix Garcia Pujolar and Rodrigo Conde Romero, who led the Sinkovic brothers for the first quarter of the race and took silver just 2.53 seconds behind.

Dutch single sculler Karolien Florijn controlled the final of the women’s single sculls from the front to finish ahead of Greece’s Evangelia Anastasiadou, who had become U23 Champion in the lightweight women’s single sculls just a couple of weeks ago. Meanwhile, an incredible final sprint from local sculler Alexandra Foester earned her bronze and pushed Olympic bronze medallist Magdalena Lobnig of Austria out of the medals.

The charge to the line from Romania in the women’s eight was just too much for Great Britain to match, and they had to settle for silver, with the Netherlands taking bronze. The gold for Romania was the second 2022 European title for the Olympic champions Ancuta Bodnar and Simona Radis.

The day ended with major disappointment for the home nation when reigning European and World Champion Oliver Zeidler missed out on a medal in the men’s single sculls in dramatic fashion, having led the race until the last 150m. Melvin Twellaar matched the earlier performance of Florijn to take a second gold for the Netherlands, finishing ahead of Greece’s Olympic champion Stefanos Ntouskos and Bulgaria's Kristian Vasilev.

The next event will be the European Rowing Under 23 Championships in Hazewinkel, Belgium which will be held 3-4 September 2022.