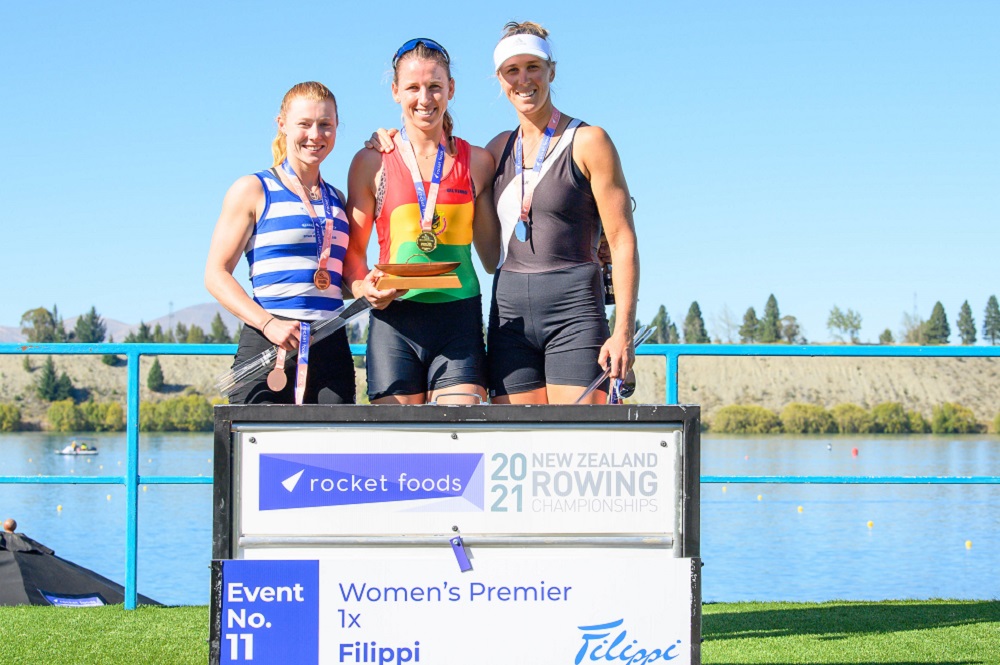 After a two-day delay due to the Twizel Region’s Alert Level 2 status, the 2021 Rocket Foods New Zealand Rowing Championships commenced on Thursday 20 February with a condensed three-day schedule. All Finals were contested on Saturday 20 February with racing concluding with the women’s and men’s premier eight events in a new draft format.

After making the switch to Waikato Rowing Club and joining Waikato Rowing Performance Centre in the summer of 2013–14, Brooke went on to gain selection in the U23 quad that won bronze at the World Rowing U23 Championships. The following year she picked up a silver in the double at the same regatta. The women’s quad unfortunately failed to qualify for the 2016 Olympics at the ‘regatta of death’ in Lucerne, but Brooke began to emerge as one of New Zealand’s top female sculling prospects. In her breakthrough season in 2017 she joined forces with Olivia Loe in the elite women’s double. The duo went unbeaten through the international season, winning two World Rowing Cup regattas and Henley Royal Regatta and becoming the 2017 World Champions in Sarasota. In 2018 they won the World Rowing Cup II and III regattas before facing stiff competition at the World Rowing Championships in Plovdiv, where they won silver behind Lithuania.

In 2019 Brooke was again selected into the women’s double sculls with Olivia Loe. Brooke and Olivia defended their World Rowing Cup II title and went on to win the Stonor Challenge Trophy for the women’s double sculls at the Royal Henley Regatta. After a successful start to their European season, they won gold at the 2019 World Rowing Championships, securing Olympic qualification in the process.

Tom began rowing at Lindisfarne College and Hawke’s Bay Rowing Club in 2012 at the age of 15. Within two years he found himself selected in the 2014 junior men’s coxed four. The crew raced to a bronze medal at the World Rowing Junior Championships in Hamburg, Germany. Tom took time after the World Rowing Junior Championships to focus on his study at the University of Canterbury. During that time he stayed involved with the sport at Rowing Performance Centre level and was also in the New Zealand Universities trans-Tasman team in 2015. In 2016 he was selected in the New Zealand U21 team that competed in a two-regatta series against Australia. The following year Tom was selected in the U23 men’s eight that went on to place 7th at the World Rowing Championships in Plovdiv, Bulgaria.

James Coote achieved remarkable success in the 2019 season with two of his crews both being crowned World Champions, and was named coach of the 2020 and 2021 women’s double and lightweight women’s double crews. James has also been instrumental in the development of Brooke Donoghue who was today named as the Female Rower of the Year.