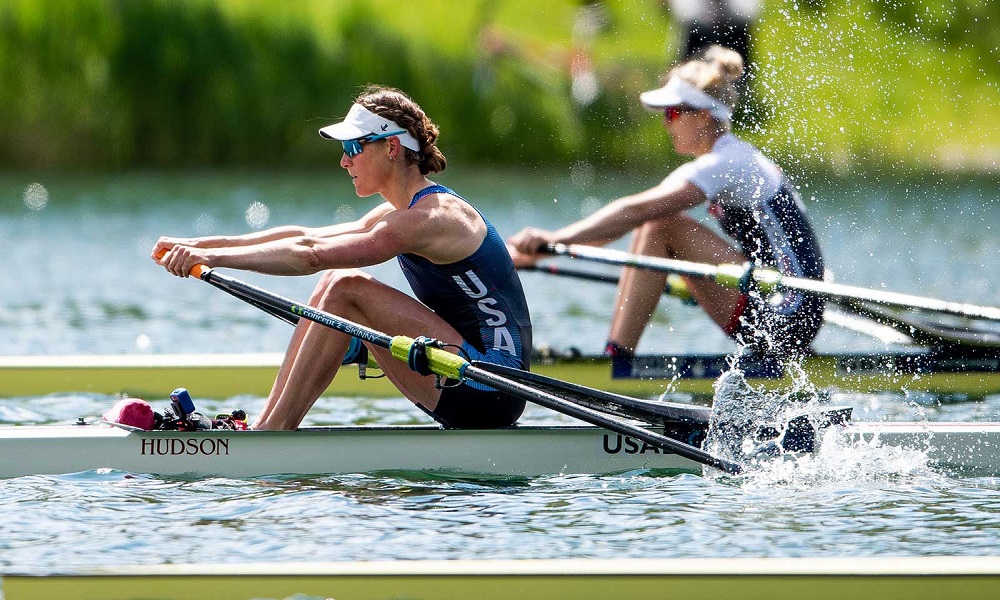 With three to advance to the final, Kohler, Ireland's Sanita Puspure, and Great Britain's Victoria Thornley made quick work of the rest of the field in the first semifinal, building a four-second lead in the first 500 meters to lock down the three qualifying positions.

Kohler held a narrow advantage on Puspure at the 500-meter mark and continued to lead the defending world champion by a half-second at the midway point of the race. During the third 500 meters, Thornley made a push to take the lead, with Puspure holding second and Kohler content to row in the third qualifying spot. At the line, Thornley crossed in an 8:05.03, with Puspure finishing in an 8:06.18. Kohler finished in an 8:09.95.

"My main goal today was to advance to the final tomorrow," Kohler said. "Hitting race pace felt a little better than yesterday's heat, but I still have some adjustments to make for tomorrow's final. (My goal tomorrow is) to put myself in a position to medal."

In the second semifinal, Russia's Hannah Prakhatsen, who won the European Championships earlier this year, won the race in an 8:03.28, with Austria's Magdalena Lobnig finishing second and Switzerland's Jeanine Gmelin taking third to advance to the final. The final is scheduled for 12:13 p.m. local time.

Racing in the second semifinal of the lightweight men's double sculls, Zachary Heese (Pelham, N.Y./University of Virginia) and Jasper Liu (Phoenix, Ariz./University of Pennsylvania) finished fourth and will now race in Sunday's B final for overall places 7-12. With three to advance, Heese and Liu got off the line in fifth position before moving into fourth just after the 500-meter mark. However, the U.S. boat was unable to keep pace with Norway for the third qualification spot during the back half of the race. Ireland won the race in a 6:36.95, with Belgium taking second and Norway third. The U.S. finished with a time of 6:53.18.

In tomorrow's B final, Heese and Liu will race against crews from Portugal, China, Switzerland, Poland and Chile. The B final is scheduled for 10:00 a.m. local time.

In the men's double sculls, Kevin Cardno (Huntsville, Ala./ University of Alabama, Huntsville) and Jonathan Kirkegaard (DeForest, Wis./Purdue University) finished second in their C final to place 14th overall. Switzerland's Kai Schaetzle and Tim Roth took the lead off the start, with Cardno and Kirkegaard grabbing second place. The two crews continued to row away from the rest of the field during the middle 1,000 meters before Switzerland pulled away for the victory. The Swiss boat finished with a time of 6:58.87, with the U.S. finishing in a 7:02.90.

In the C final of the lightweight men's single sculls, Jimmy McCullough (Philadelphia, Pa./University of Delaware) crossed the line in second behind Spain's Patricio Rojas Aznar for a 14th-place finish overall. McCullough got off the line in third position before moving into second place during the second quarter of the race. Rojas Aznar took the lead off the start and never trailed, crossing the line in an 8:02.91. McCullough finished with a time of 8:10.21.

In the men's single sculls, John Graves (Cincinnati, Ohio/Trinity College) finished third in the D final for a 21st-place finish overall. Graves and Brazil's Lucas Verthein Ferreira battled each other at the top of the field through the 1,000-meter mark, with Graves leading at the midway point of the race. However, Moldova's Chirill Visotchi-Sestacov made a huge push in the third 500 to pass Graves and come up virtually even with Verthein Ferreira. Visotchi-Sestacov continued to challenge the Brazilian before overtaking him at the line to win the race in a 7:42.72. Verthein Ferreira finished 0.12 seconds behind. Graves clocked a 7:47.11.

In addition to Kohler, the women's double sculls crew of Gevvie Stone (Newton, Mass./Princeton University) and Kristina Wagner (Weston, Mass./Yale University) will be racing for a medal on Sunday. Stone and Wagner won their heat on Friday to advance directly to tomorrow's final. The duo will take on two crews from The Netherlands, as well as Romania, the Czech Republic, and Italy, in the final. The final is scheduled for 12:59 p.m. local time.