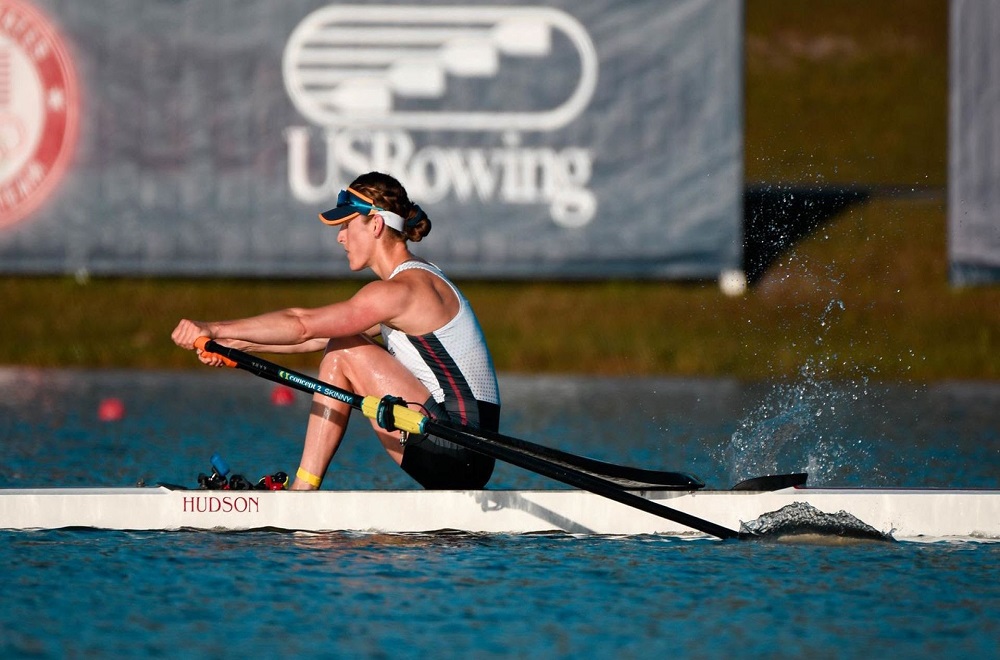 6 US boats to compete in Luscerne

The U.S. will have six boats racing this weekend at World Rowing Cup II on the Rotsee in Lucerne, Switzerland.

In the women's single sculls, Kara Kohler (Clayton, Calif./University of California, Berkeley) will be competing in her first international race since winning the bronze medal at the 2019 World Rowing Championships in Linz, Austria. Kohler, a two-time Olympian, won the women's single at the first U.S. Olympic Team Trials – Rowing in February, securing her spot for Tokyo.

"I can't wait to make the most of each time down the course, especially since this will be my only test against an international field before the Tokyo Olympics" Kohler said. "It will be strange not having spectators, and I will definitely be missing the energy of having the rest of Team USA here racing."

Kohler will be racing in the third of three heats on Friday against scullers from Mexico, Greece, China, and Trinidad & Tobago. The top three finishers will move on to the semifinals, with the remaining scullers going to the repechages.

Fresh off their Olympic Trials' victory in the women's double sculls, Gevvie Stone (Newton, Mass./Princeton University) and Kristina Wagner (Weston, Mass./Yale University) will be making their international debut as a crew in Lucerne. Stone, the 2016 Olympic silver medalist in the women's single sculls, secured her third Olympic berth by winning the double trials. Wagner is a first-time Olympian.

"It feels great to return to Switzerland, and it's very exciting to be racing an international regatta again," Stone said. "I'm glad Kristi and I get this opportunity to race internationally prior to Tokyo. Kristi and I have had a good month of training in Boston. We returned to weightlifting, and we've been fortunate to have the CBC varsity quad to keep us company on piece days – the guys keep it fun! As for the racing, like always, Kristi and I hope to execute a race of which we're proud. It will be thrilling to have six lanes of fast boats, and I hope that fast competition helps us to achieve our fastest races."

Stone and Wagner will take on crews from The Netherlands, China, and Italy in the second of two heats. The top two finishers advance directly to the final, with the remaining boats going to the repechage. The Dutch duo of Lisa Scheenaard and Roos de Jong won the bronze medal at the 2019 World Rowing Championships and recently finished fourth at the 2021 European Championships.

"It is exciting to be racing internationally this week," Wagner said. "We are both looking forward to the opportunity to see where our training has taken us … I am hoping we can just stay internal and process oriented, taking things one step at a time."

In the men's single sculls, John Graves (Cincinnati, Ohio/Trinity College), a six-time senior national team member, competed at the Final Olympic Qualification Regatta last weekend. Racing in the third of six heats, Graves will take on two scullers from The Netherlands and a sculler from Bermuda, with the top three finishers moving on to the quarterfinals. Dutch sculler Amos Keijser finished seventh in the event at the 2020 European Championships.

In the lightweight men's double sculls, Zachary Heese (Pelham, N.Y./University of Virginia) and Jasper Liu (Phoenix, Ariz./University of Pennsylvania) also competed at the Final Olympic Qualification Regatta last weekend. Racing in the third of three heats, the duo will take on two crews from Belgium, as well as boats from Norway and Germany. The top two finishers move on to the semifinals, with the remaining boats heading to the repechages. Germany's Jonathan Rommelmann and Jason Osborne won the first world cup race of the season and took the silver medal in the event at both the 2020 and 2021 European Championships.

Likewise, the men's double crew of Kevin Cardno (Huntsville, Ala./ University of Alabama, Huntsville) and Jonathan Kirkegaard (DeForest, Wis./Purdue University) competed in the Final Olympic Qualification Regatta last weekend. Cardno and Kirkegaard will face Poland, Egypt, Great Britain and China in the second of four heats, with the top two finishers moving on to the semifinals and the remaining boats going to the repechages. Great Britain's Graeme Thomas and John Collins won the bronze medal at the 2021 European Championships, while Poland's Miroslaw Zietarski and Mateusz Biskup won the silver medal at World Rowing Cup I earlier this month in Croatia and are the 2019 World Rowing Championships bronze medalists in the event.

In the lightweight men's single sculls, Jimmy McCullough (Philadelphia, Pa./University of Delaware) is one of 16 entries scheduled to race in Lucerne. McCullough represented the U.S. in the lightweight men's double sculls at the 2019 Pan American Games. Racing in the second of three heats, McCullough will face scullers from Spain, Italy, France and Germany. The top three finishers move on to the semifinals, with the remaining boats going to the repechages. Italy's Martino Goretti is the defending world champion in the event.

Racing at World Rowing Cup II gets underway on Friday with heats, some repechages and quarterfinals. Saturday will feature the remaining repechages, semifinals and finals in the non-Olympic boat classes. Finals in the Olympic-class events will be held on Sunday.