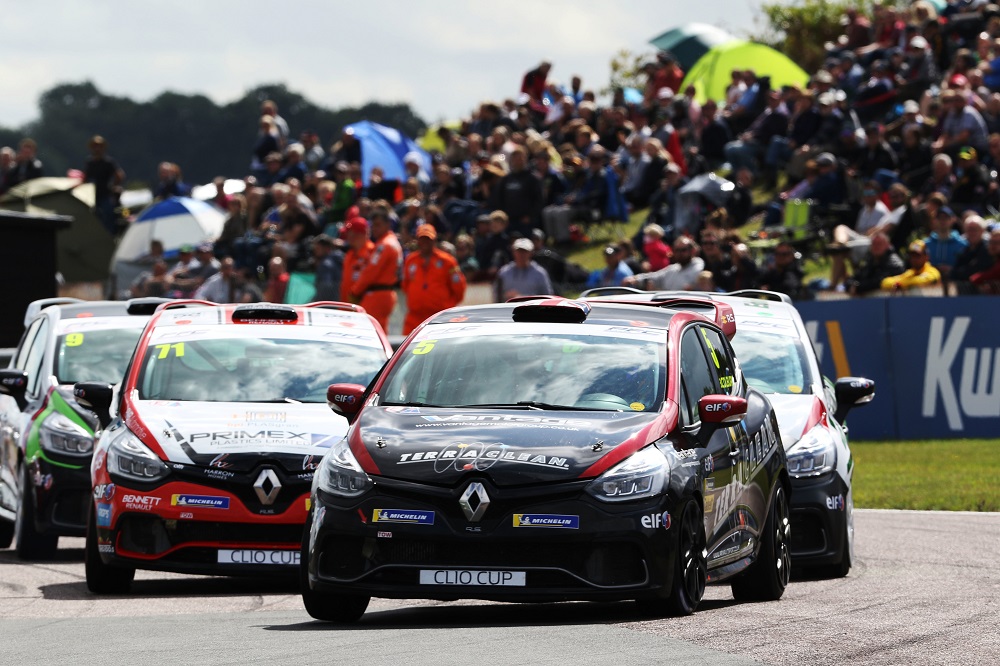 Young and Hamilton win at Thruxton

Jack Young (Belfast) and, for the first time, Ethan Hammerton (Northallerton) were the winners of the weekend’s two dramatic and highly charged Renault UK Clio Cup rounds at Thruxton in Hampshire, but it is Max Coates (Scorton) who continues to lead the standings.

Both races at Thruxton – the second televised live on ITV4 on Sunday – will go down as ‘Clio Cup classics’ even though they were ultimately decided by penalties.

The opening race, held on Saturday, came down to a four-way fight for the lead between MRM team-mates Young and Brett Lidsey (Northfleet) and Team HARD drivers Coates and Jamie Bond (West Malling).

Lidsey, who’d started from a career-first pole position, led every lap. But what should have been a career-first win was taken away by a time penalty for having made a false start.

Coates, who had crossed the line in second, should therefore have inherited the win. But he too was penalised for passing Young by ‘short-cutting’ the Club Chicane.

Thus Young, third at the chequered flag, was declared the winner ahead of the demoted Coates and Bond who collected bonus points for setting the fastest lap.

Sunday’s race proved to be another nail-biting affair as slipstreaming tactics once more played a significant part in the outcome.

Under braking at high speed for the final bend, title rivals Young and Coates made contact while disputing the lead. Coates’ car was sent spinning into a barrier and retired, but Young was able to keep going and crossed the line in first place.

However, Young was later disqualified from the result for his part in the incident, meaning Hammerton, second at the chequered flag, inherited his first win in the championship.

Bond took second – his car carrying damage from an earlier altercation – and Tyler Lidsey (Dartford) third on his debut weekend in the championship.

Leaving Thruxton, Coates leads Young at top of the championship by the slightly increased margin of ten points. Bond is now up to third and only 31 points adrift of leader Coates. The next two rounds are at the Knockhill circuit in Fife on Sat 14/Sun 15 Sept.

Elsewhere at Thruxton there were other performances of note: Westbourne Motorsport's Ben Colburn (Worthing) led a lap for the first time and he and Team HARD's Jade Edwards (Northampton) could also have had the victory in race two, challenging eventual Hammerton for much of the distance before both span late on; Specialized Motorsport's Luke Warr (Sudbury), avoiding the skirmishes, took a career-best fourth place; and Westbourne's Finlay Robinson (Harrogate) showed improved form during the weekend in spite of an accident in race two.

Team HARD – aided by a dream 1-2 result for drivers Hammerton and Bond in race two – leads the Entrants Trophy standings for teams by the increased margin of 63 points over MRM.

Young’s disqualification from race two means he is now only four and seven points respectively ahead of Colburn and Hammerton in the Graduates Cup for younger drivers in their first full seasons in the championship.