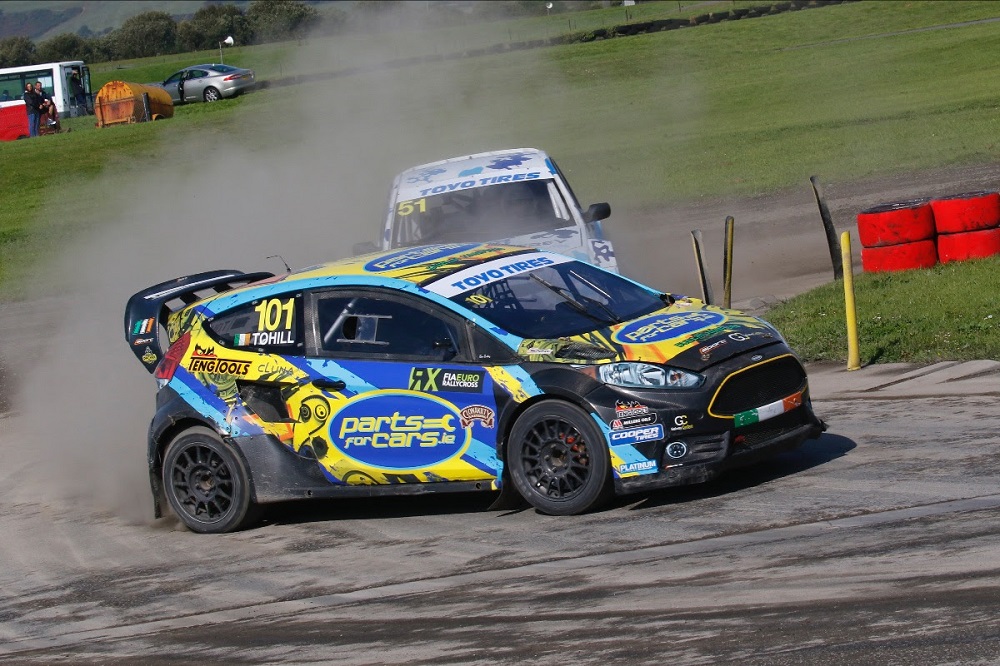 Tohill’s third win matched the number of victories scored so far this season by standings leader Julian Godfrey (Heathfield) and with two points now separating the pair at the head of the standings, it will be all to play for in the season finale at Croft Circuit next month.

In a change to the usual format, the event was held over two days at Pembrey, with Q1 and Q2 run in dry conditions, before rain changed the track conditions for Q3 and Q4 on Sunday morning.

Surviving racing incident contact between the two Ford Fiestas in Q2, Tohill and Godfrey qualified first and second in the Intermediate Classification, and it was Tohill who took the lead of the final from pole position.
He fended off an early challenge from Godfrey and never looked back to take the win and maximum points.

“It has been very tough this weekend, it was two long two days but the hard work was done in qualifying because track position here, in terms of having pole position, is really, really important. Having pole position was great and luckily I came out in the lead after the first corner and got my head down,” said Tohill. “The track was getting faster every lap and I got the car to the end, it was a good run. There wasn’t much in it all weekend between myself and Julian, so I suppose that’s the way it should be. There’s nothing in it for the Championship and with a double header at Croft, the weather will probably be inclement. The wetter the better for us, bring it on!”

Godfrey suffered a puncture late in the race after first corner contact, but held on to finish second in front of local driver Roger Thomas (Llandysul), the Welshman having another strong run in his new-for-2019 Ford Fiesta and driving the car to a podium finish for the first time.
Steve Hill (Thame), who had a solid weekend at Pembrey, was classified fourth, but made it no further than the second corner in the final after contact left his Mitsubishi Evo stranded. Andy Grant (Barnstaple) qualified fifth for the final but was unable to take the start due to a broken transmission in Q4, while Simon Horton (Clitheroe) was forced out in Q3 with differential failure.

Tristan Ovenden (Canterbury) was initially beaten away from the start in the Motorsport UK Supernational Rallycross Championship final by Lotus Exige campaigner Guy Corner (Northallerton), but with a decisive pass on the second lap and a dominant drive thereafter, reigning Champion Ovenden claimed his sixth consecutive victory of the season with his Renault Clio V6 and now cannot be beaten to the crown whatever happens at the season finale.

Corner made a second appearance with his new Lotus and spent the weekend working on improving the car. A good start in the final was followed by consistent pace on his way to second, while the final step of the podium was claimed by Polish driver and Super1600 Rallycross Championship winner Jarek Suchowiecki (London).

“The starts have beenreally good all weekend, even in the rain but I nearly jumped it in the final, so had to take two bites at it and Guy made a great start. I thought ‘just don’t panic’, we knew the pace was good in the dry and I managed to get him on track, it was good,” said Ovenden. “The year has been really has been amazing. I’m so pleased, there’s always a lot of pressure going into these weekends, trying to get everything right, especially when the Championship’s on your mind. It’ll be fantastic to go to Croft and enjoy the weekend.”

Paul Coney (Dartford) finished fourth ahead of Dave Ellis (Leeds), while Craig Lomax (Knottingly) was forced to retire with a driveline issue in the final but continues to lead the Super1600 Championship standings.

It was a double-header weekend for the Motorsport UK Junior Rallycross Championship, with separate rounds taking place on Saturday and Sunday at Pembrey Circuit.

By qualifying on pole position for the final in round six on Saturday, Luke Constantine (Richmond) was declared the winner in front of Patrick O’Donovan (Iver) and Ben Sayer (Northallerton) when the race was cancelled after two starts, each of which were stopped after incidents.

“Obviously I was really happy to get the win. I would rather have won on-track in the final but a win is a win and I’m happy to take the points,”said round six winner Constantine. “It’s really, really close in the Championship and I can’t wait for the last two rounds at Croft.”

In round seven on Sunday, O’Donovan made the best start in the final to take the lead, before immediately getting overtaken by Constantine. As the pair battled for the lead, Sayer took an early joker lap and then raced to a maiden win by picking off those ahead when they also took their joker laps.

“I took the joker early and got my head down. I got behind Luke and Patrick, I saw them battling so I just kept my lines clean and it paid off,”said Sayer. “I struggled a bit in the wet in the morning but as the track dried up I got a lot quicker. I’m proud of the win, I’m so glad to get it here. Hopefully I can just keep going and push up to the top.”

O’Donovan finished second with Constantine third and the pair will head into the final weekend of the season tied on points. Tom Ovenden (Canterbury) claimed a pair of fourth place finishes, while Latvian driver Roberts Vitols took a fifth and a seventh from the Welsh weekend, with local driver Archie Thomas (Llandysul) mirroring Vitols’ results on the opposing days. Alfie Porter (Waltham Abbey) finished sixth in round six but was halted by an engine failure in round seven, while James Constantine (Darlington) had a difficult weekend scored a best result of sixth on Sunday.

In Swift Sport, Max Weatherley (Faversham) was the dominant force through qualifying, taking a clean sweep of fastest times on both days, but it was former Junior RX racer Will Layton (Banbury) who took the lead of the final in round six on Saturday and fended off the attentions of Weatherley to claim victory, while points leader Dominic Flitney (St Ives) finished third. Weatherley turned his speed into victory in round seven on Sunday, as outgoing Junior RX Champion Tom Constantine (Richmond) finished second and Flitney was again third. Four points now cover the top three drivers with two rounds remaining.

Drew Bellerby (Northallerton) and David Bell (Ferryhill) took a win each in the BMW Mini class, while both drivers finished second on the day they didn’t win, in a pair of close contests that mean the fight for the title will go down to the wire at Croft Circuit. Bellerby’s team mate, Stephen Brown (Bamford), twice finished third.

Chrissy Palmer (Chichester) extended his points lead in the RX150 Rallycross Championship with a dominant win, ahead of Supernational racer Paige Bellerby (Northallerton) who made a guest appearance in RX150 after being forced out of the Supernational championship on Saturday morning when the gear selector broke in her own car. Stephen Jones (Havant) finished third.

Gary Simpson (York) maintained his unbeaten run of Retro Rallycross Championship wins with another victory at Pembrey, while closest challenger, Brian Hardman (St.Helens) was forced to retire with a broken gear lever. Tony Lynch (Wigan) finished the final second, while Steve Cozens (Lifton) came out on top of a battle with Paul Smith (Stourbridge) for third.