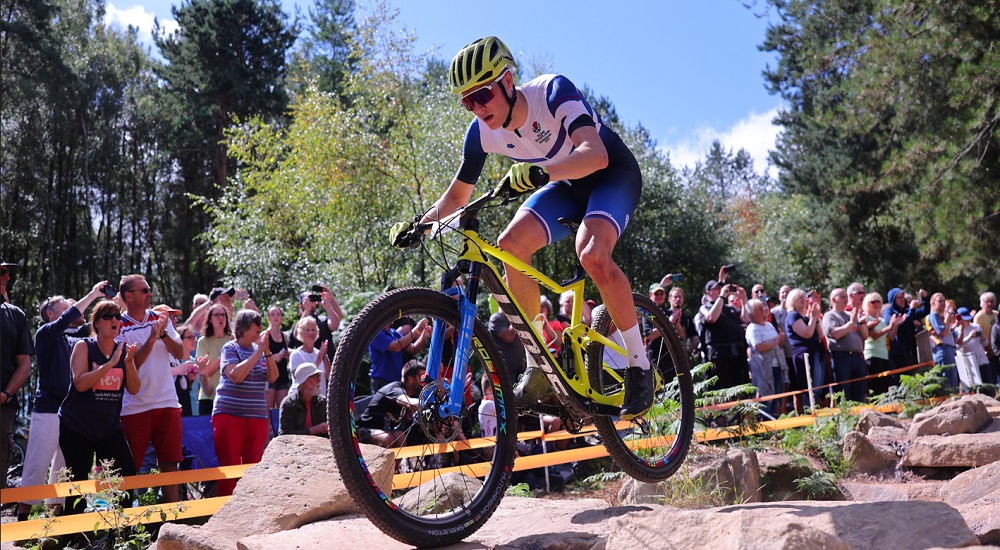 The men were off first, which meant the women’s race took the showpiece slot in the afternoon, when the crowds were at their loudest, making the most a brilliant summer day on the outskirts of Birmingham.

World Champion Evie Richards of England would go clear on lap two of seven to take an impressive victory, much to the delight of the home crowd, but that left Short in a battle with Candice Lill of South Africa and Australian Zoe Cuthbert for the remaining two medals.

Riding for long periods of the race on the front, Short would use both the main climb on each lap, and the technical sections, to try and force a gap to her rivals. On the third and fourth laps the diminutive figure from Peebles would push the pace, twice distancing Cuthbert before she would make her way back to the other two.

Remarkably the Aussie rider then attacked herself in the woods with two and a half laps remaining, distancing Isla and then Lill of South Africa, and would go on to take silver. Short dug deep all the way but didn’t quite have enough in her reserves to claw back the South African and so would finish in fourth place.

Post-race, Isla confessed: “I’m disappointed – I came here for a medal. But I don’t regret my race plan, as I feel I did the best I could on a course that doesn’t really suit me. I tried to control the pace a bit but it turns out it’s quite physical as you’re just pedalling the whole way round and I blew up on the third last lap and just had to hold on for fourth.

“It’s always a privilege to represent Scotland, as we don’t get to do it very often, so it’s always really special, regardless of the outcome. I’ll now focus on the rest of the World Cups and try and make progress there, before coming back to the Games in a few years’ time and try and improve.”

In the men’s race it was heartbreak for Charlie Aldridge, who after attacking his rivals and looking on course to win a bronze medal, came off on a corner on the small, grassy finish circuit, ripping his rear derailleur clean off his bike.

With a full third of a lap until the technical zone, where he could receive mechanical help, he slipped back through the field, running and scooting until he could receive assistance. Taking a seat in the shade while the team mechanic managed to partially repair the issue (setting him up single speed) he showed incredible character to get back on his bike and finish the remaining two laps of the race.

Naturally gutted with the outcome, Aldridge reflected: "I'm pretty gutted. On the third or fourth lap I got a bit of a gap on the other two GB boys and just pushed it too hard round the corner coming into the start/finish arena, slid out and a little crash happened.

“I had to run all the way to the pits and the mechanic did a great job to make it single speed, so I was spinning around in one gear for the whole rest of the race until I got pulled with one lap to go.

“I'm pretty upset. It's amazing to be riding round here. None of my races are really filmed so it meant so much to me to be riding here. I was tearing up riding around trying to get to the finish - it happens when you least want it to happen - I'll just have to get them next time."