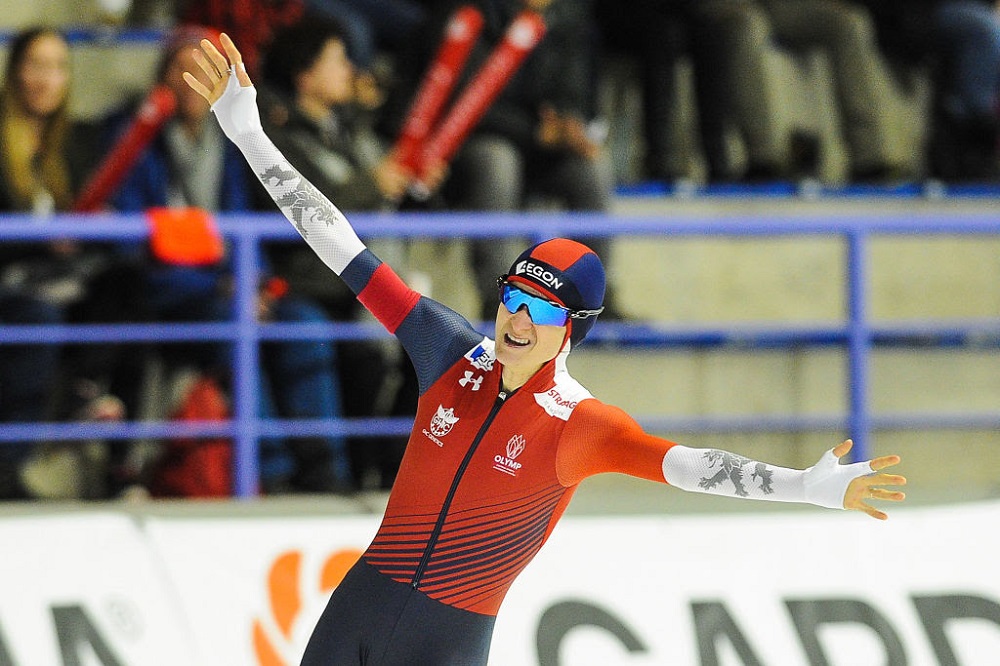 Starting in the outer lane, Takagi managed to cross ahead of Wüst after a stunning 10.41 split over 100m. With a personal best of 37.22 the Japanese left her Dutch opponent 1.24 seconds adrift at the finish line.

Wüst took second place overall, just 0.06 ahead of another strong competitor, Antoinette de Jong of the Netherlands. The European Champion came third with a PB of 38.52, crossing the line ahead of European Allround bronze medallist Francesca Lollobrigida (ITA), who also skated a personal best of 39.06 in a hard-fought contest but ended up in a distant 11th place overall.

World record for Sáblíková
The Czech long-distance specialist Martina Sáblíková (CZE) had skated 39.32 to come 13th in the 500m, but in the 3000m she served notice of the threat she poses.

Wüst set the bar at 3 minutes and 59.79 seconds in the eighth pairing over the longer distance on day one, and Takagi countered with 4:00.16 in the 10th pairing, comfortably retaining her number one spot in the overall classification. Canada's Isabelle Weidemann (CAN) defeated Takagi to win the pair in 3:58.51, the best time so far.

In the penultimate pairing Sáblíková took on De Jong, and the 3000m and 5000m world champion started as she meant to go on, flashing across the finish line in world-record time.

"I've been skating great laps here in training and my coach said I should go for the world record,” Sáblíková said. "I doubted, because I tried it here two or three years ago and I died in the last two laps. But I thought ‘OK, let's try’."

This time around, Sáblíková maintained her form until the end. With 3.53.31 she was 0.03 seconds faster than previous record-holder Cindy Klassen (CAN) had been on the same track 13 years ago. Sáblíková could hardly believe that she finally made it. "I don't know what to say, those last two laps were very, very hard,” she said.

De Jong finished second in the 3000m, clocking 3:58.25, narrowly ahead of Weidemann, who took third place.

Sáblíková versus Takagi
Going into day two, Takagi leads the overall classification with a 2.88 second advantage over Sáblíková for Sunday's 1500m. De Jong lies in third, 2.95 seconds behind, and Wüst fourth with +3.54.

"I'm not going to settle for third or fourth place, but I have to be realistic,” said De Jong, who won the gold medal at the recent European Allround Championships in Collalbo, Italy. "I'll just have to skate two very good races tomorrow."

Sáblíková and Takagi each tried to put the other into the role of favorite ahead of day two at Calgary’s Olympic Oval.

"Miho is Miho, she's incredibly great in all distances and I think she will be world champion," Sáblíková said. "I don’t know about myself tomorrow. I'll have to skate a very good 1500m, but after today I feel very tired."

Takagi, who took silver at the World Sprint Championships last week in Heerenveen, Netherlands, said she had recovered well. "I flew over on Monday and I had to adapt to the longer distances, but it feels OK.

"I do not think my lead is enough to keep Sáblíková at bay, however. She was very strong in the 3000m and she will be equally strong in the 5000m tomorrow. I have not skated the 5000m for a very long time, so it's difficult to tell where I stand. But I'm looking forward to it."

"I think Sáblíková is the big favorite, but many things can happen in an Allround tournament and normally Miho is doing well on the second day."

Canada's Antoine Gélinas-Beaulieu won the men's opening distance in 35.53, with Roest coming second in 35.74 and Pedersen third in 35.85. In a sign of the level of competition, all three men had to skate a personal best to earn a place on the 500m podium.

A mistake at the start line may have cost the multiple champion. ”That 500m does not reflect how I feel, because I'm in good shape,” Kramer said. “I had the feeling that I did not stand still at the start, so I expected to get a false start, but the second shot did not come, so I had to continue.

“It all happens in a split-second, but it costs a bit of time because after a slow start making pace in that long outer corner is more difficult too. It's a pity, but it's my own fault."

Pedersen punished
Roest carried a 1.10 second gap over world 5000m champion Pedersen into the second distance. The Norwegian 5000m was the first of the title favorites on the ice, in the ninth pairing. He skated a balanced race of sub-29 second laps, but collapsed in the final two laps, clocking 29.9 and 31.4 to finish in 6:10.10.

"I tried to do something special, pushing down my lap times to 28.7 in the ninth and 10th lap, but the last two laps were too hard,” Pedersen said. "I may have been a little too eager. At this altitude you get punished for skating too hard in the middle part."

Kramer and Roest knew how to take advantage of Pedersen’s slip. In the 10th pair, Kramer skated a little behind Pedersen's pace throughout, only to catch up with two final laps of 28.8 and 29.1 to stop the clock at 6:08.83.

Roest followed his team-mate’s example, and managed to outskate him with final 28.7 and 28.6 laps to post a personal best of 6:08.27 and win the distance.

Kramer and Pedersen finished second and third in the 5000m, as well as in the overall ranking.

Roest in pole position
With his 5000m victory, the defending champion increased his lead over Pedersen to 0.88 seconds for Sunday's 1500m. Kramer trails 2.18 seconds.

Pedersen faces a tough task to challenge for the gold on Sunday.

"Patrick skated two really good races today and it will be hard to beat him tomorrow, but I just have to stay positive," the Norwegian said. “I'll try to recover and see what happens tomorrow."

Contrary to Kramer and Pedersen, Roest was satisfied with both his races on Saturday.

"A perfect start,” he admitted. "I have to follow this up in the same fashion tomorrow.

"I knew what to do. When I saw Pedersen [struggle in the last two laps] I wanted to pace my race smarter. In Inzell (at the World Single Distance Championships) I started too fast and couldn't pull through. This time I started more carefully, and with five laps to go I knew I could bring it home.”

The defending champion was anxious not to speculate on winning another title just yet. “Sverre [Pedersen] is my biggest opponent at the moment," he said. "It’s a tough challenge for him, but he can skate a good 1500m.”

The decorated Kramer felt his chances of clinching a record-extending 10th title were blown in the 500m.

"For me to win? That's only possible if someone crashes or gets disqualified and that's not how you want to win a title,” he said.