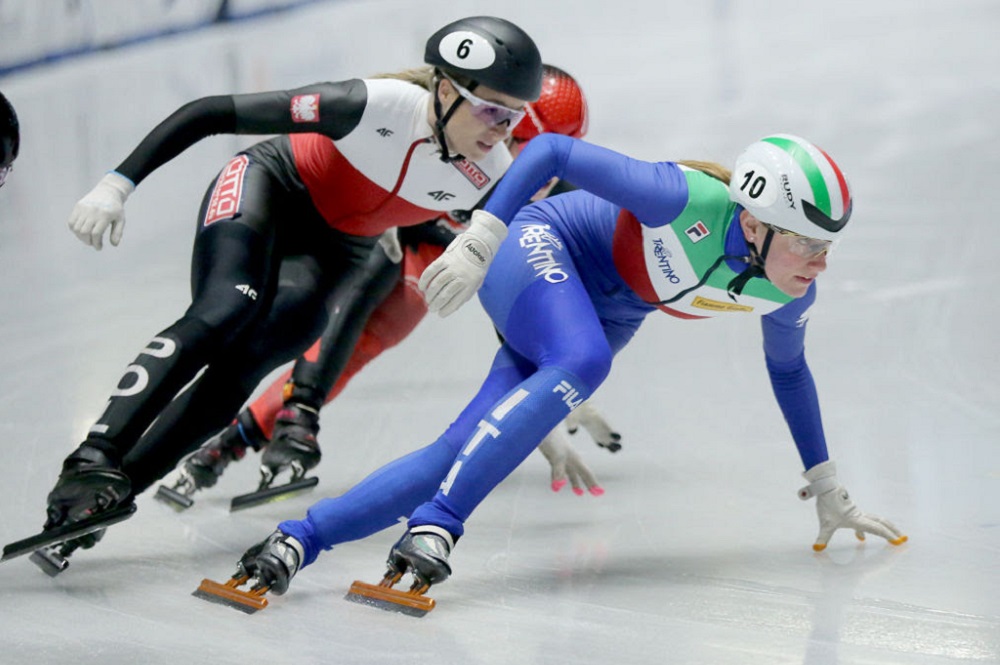 Martina Valcepina shook off the expectation of being Italy’s poster girl and delivered the 500m gold Torino was hoping for as the final Short Track speed skating World Cup of the season got under way on Saturday.

With the poster board in the warm-up area showing off the many newspaper and magazine articles about Valcepina, combined with the strength of the 500m field, it was a tough day for the Italian.

“I have felt a lot of pressure, a lot,” Valcepina admitted later. “I have been very tense all week.”

Last week in Dresden, Germany, Valcepina dominated, leading all her heats and the final from the gun, but her route to a second successive World Cup sprint gold was far more demanding. Having squeaked through her quarter and semifinal, the 26-year-old faced the two women ahead of her in the season-long World Cup rankings, Lara van Ruijven (NED) and Natalia Maliszewska (POL), as well as PyeongChang 2018 Olympic 500m bronze medallist Kim Boutin (CAN).

Nerves were stretched even further by the final being re-started three times following crashes in the first half-lap.

Once they finally got under way Valcepina drove to the front, roared on by the crowd in the Tazzoli Ice Rink, which included her twin four-year-old daughters. And she managed to stay there – just – as she held off the fast-finishing Maliszewska on the line.

“That felt so good,” Valcepina said. “It has been so different compared to last week in Dresden. The nerves, and the ice was different - softer, not as quick. I couldn’t do what I did last week.”

The win saw the Italian narrow the gap to just 247 points on second-placed Van Ruijven in the World Cup rankings with only Sunday’s second 500m to come. On the back of a stunningly consistent season, Poland’s Maliszewska remains out in front and her lead of 9240 points means the crown is almost hers.

“It’s the fifth World Cup, there have been six finals so far and I have been in all of them - that is awesome,” said Maliszewska. “Consistency and stability… It’s the best thing I have done all season.”

Mathematically speaking both Valcepina and Van Ruijven can catch the 23-year-old Pole with a win on Sunday but only if Maliszewska finally fails to reach the latter stages of the competition.

But while the competition remains tight in the sprint, there is absolutely no doubt who rules the longer distances. Fresh from sealing the 1000m title last weekend in Dresden, the Netherlands’ Suzanne Schulting added the 1500m crown in what is already a remarkable season.

Despite the seven-strong field for the final featuring the likes of three-time world champion Elise Christie (GBR) and rising Russian star Sofia Prosvirnova, there was little doubt Schulting would claim her sixth World Cup win of the season. The Dutch skater looked in a different class from her opening heat and seemed to slip into another gear with six laps to go.

“She is so strong,” said Wilf O’Reilly, the Dutch team discipline manager. “But she has got 2-3% improvement in her at least for the Worlds (Championships). We put in a lot of hard work after the Europeans.”

That may be a worrying thought for her rivals, but one woman who is relishing the prospect of next month’s World Championships in Sofia, Bulgaria is Anna Seidel. Last week the young German was crushed by the disappointment of failing to even make a final in front of her home crowd but, unburdened by the pressure of expectation, Seidel flew round the Tazzoli rink.

“I am super happy,” Seidel said after finishing third in the 1500m, behind Korea’s Kim Ji Yoo. “Last week I was really sad and frustrated – it was like I had weights – but this is a perfect comeback. There is nothing better. A lot of the girls in the race were really strong, and this shows me that I am capable and anything can happen in Short Track.”

It is the German’s second World Cup medal of a highly promising season. She will go again in Sunday’s 1000m as the women race for the final time ahead of March’s World Championships.

Kim is one of the most in-form sportsmen on the planet. Since November’s World Cup meet in Almaty, Kazakhstan the 21-year-old has finished second-first-first-first in his four 1500m races and has comfortably wrapped up the long distance World Cup season title. In a sport where you are only ever a razor-sharp edge away from a fall, that is an extraordinary record.

“I feel tired but I like that feeling,” Kim said. “I train nine hours per day for this. It feels good. I felt confident on the last lap that I could get to the front and win.”

The skater, who must now be a huge favourite for not only the long-distance gold at next month’s World Championships but also the overall crown, has developed an almost unbeatable tactic. Namely, an ability to sweep round the outside and grab the lead on the final lap, irrespective of what has gone before in the race.

“It’s really hard doing what he does,” said Canada’s Steven Dubois, who picked up 1500m bronze behind Kim and fellow Korean Hong Kyung Hwan. “He is so good at it, just super smooth on the outside. It’s hard to beat, really hard to beat.

“You always have an idea of where they (the Korean skaters) are. You know one is going to pass outside, they are always there. You do your race but you always have the Koreans in the back of your mind.”

The Canadian has enjoyed a brilliant debut season on the World Cup stage, with his bronze propelling him into second in the 1500m World Cup rankings behind Kim. But even he is unsure how best to repel the Korean’s race plan.

“I guess maybe if you conserve your energy, go before him and try to take the lead and go fast at the end, probably he wouldn’t be able to pass,” Dubois ventured. “But it’s going to take a lot of adapting to beat him.”

Another world-class skater struggling to figure out how to combat the Korean wave is Hungary’s Shaolin Sandor Liu. The 2019 triple European champion secured his first 500m World Cup podium place since the season-opening weekend in Calgary, Canada yet he could do nothing to stop Hwang Dae Heon (KOR) from grabbing gold.

“As you can see I am still trying to find out what is the best tactic to beat him,” the silver medallist laughed. “He (Hwang) is a pretty tough competitor, he has really good skills. It was a good race, hopefully next time I can catch him.”

Liu was once again racing without the reassuring company of his brother, Shaoang Liu, who broke three bones in his hand in Dresden last weekend. The second-place finish saw Shaolin Sandor jump ahead of his absent younger brother in the 500m World Cup standings but that gave the elder sibling little pleasure.

“I was going for him, I was thinking about him. I was a bit sad I didn’t win because I wanted to shout his name at the end,” Shaolin Sandor said.
Korea’s Hwang now has a chance to overtake the absent Wu Dajing of China in the season-long sprint standings if he can win Sunday’s final World Cup 500m. It would cap a wonderful comeback for the PyeongChang 2018 Olympic Games 500m silver medallist, who was outside the top 10 just two months ago.

“I have been focusing on this race all week,” Hwang said. “I had the belief and confidence. I had a very clear plan for this. I think we can win all the races tomorrow too.”

Should he win a second 500m tomorrow and one of his compatriots triumphs in the 1000m (Koreans occupy two of the top three spots in the 1000m World Cup standings) it would mark the second successive World Cup at which Korean men have swept the individual honours.