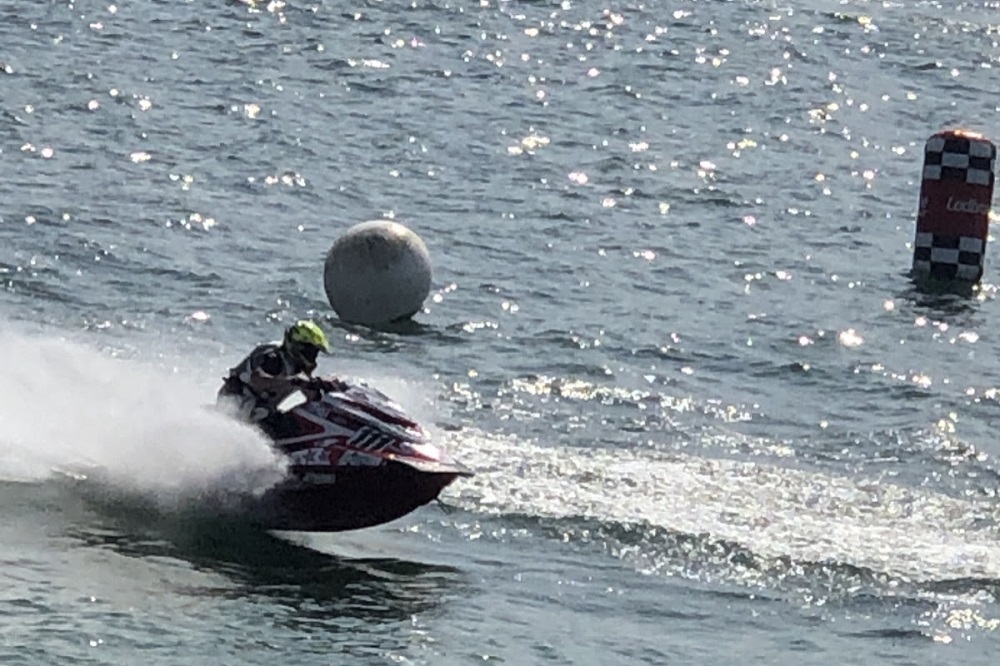 Jet Sport racer Simon Belcher is celebrating an outstanding title victory in the ‘Pro Stock’ class of the European Championship, retaining the crown he won last season after 18 years away from the sport, following a remarkable return to Eau d’Heure Lakes in Belgium at the weekend, 6th/7th July.

Competing with Dean’s Team Yamaha and AVOS aboard a 350hp, 4-stroke supercharged Yamaha GP1800 boat, the Swindon rider battled back tremendously from a mechanical issue in the first of the event’s three Pro Stock races to claim victory in the second and third encounters.

With it all to do in race three, Belcher did everything he could to make the title a possibility by winning the encounter. When American rider Troy Snyder, the points leader going into the race, missed a turn buoy he dropped to sixth position which sealed the title for Belcher.

As well as securing back-to-back championships, the crown is also Belcher’s third European title in total having won his first back in 2001 prior to making a switch from the water to the race track with a move into car racing – first in the Legends Cars National Championship, then the Renault UK Clio Cup where he was a double ‘Masters’ champion’ and, latterly, the British Touring Car Championship.

“I’m obviously delighted to retain my European title against some very tough, and very experienced, competition”, said an elated Belcher, “It wasn’t easy by any means, sixth place in the first race after a boost hose blew off wasn’t the start we needed at all.

“After winning race two the championship was back in our sights, and then the win in race three as well sealed the Pro Stock title. It’s a great achievement, winning last season after 18 years away was a dream come true but to make it back-to-back titles really is fantastic.”

In addition to his exploits in Pro Stock, Belcher doubled-up in Belgium by racing in the ‘Pro Sport GP’ class for the first time since 1997. Riding a 185hp, 2-stroke, 1200cc Retrojet HX, he delivered three strong races to finish joint second in the points, third in the standings on countback.

The Pro Sport races in Belgium formed the first of three rounds which go to make up the ‘World Series’. Lake Havasu in Arizona, USA, will host the second event between Friday, 11th October, and Sunday, 13th October, while Pattaya City in Thailand will be the location for the finale from Friday, 6th December, to Sunday, 8th December.

“Winning the Pro Stock title was the major goal for the weekend, but I’m very happy with such a great points start to the Pro Sport World Series as well”, Belcher added, “I have to say a huge thank you to all of the sponsors and partners who are supporting me this season, it wouldn’t be possible without them.”