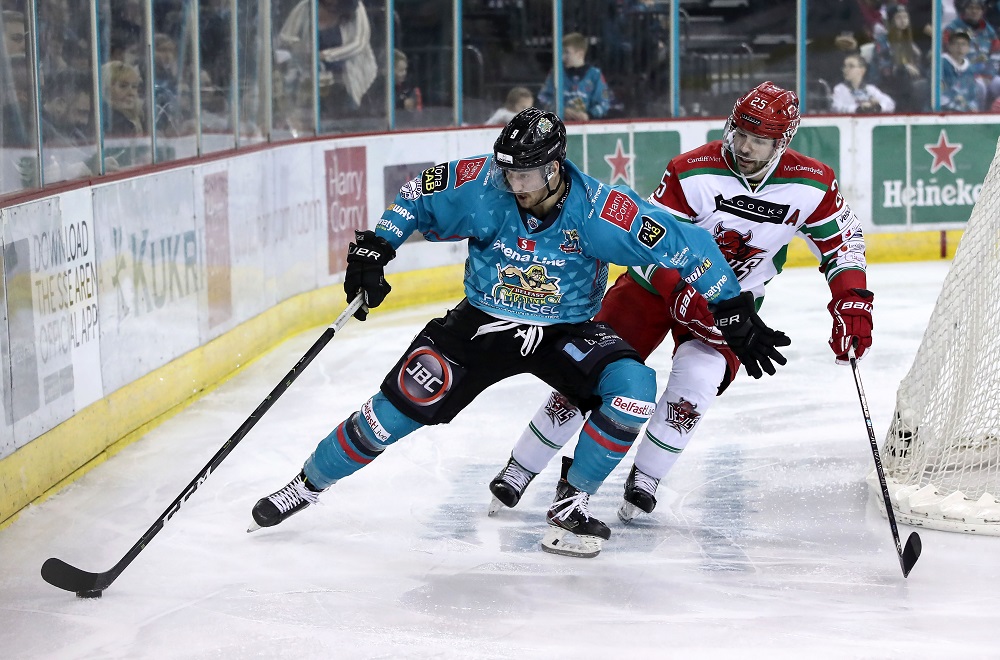 The Stena Line Belfast Giants are pleased to announce the signing of Mark Garside, Ben Lake and Jeff Baum for the forthcoming 2021/22 season.

Stalwart Scottish defenceman, Mark Garside returns for his 11th season in teal in 2021/22, while Canadian two-way centreman Ben Lake returns for his second season. Both players are returning with unfinished business after the abrupt end to the 2019/season and with solid performances in Latvia as part of Team GB under their belt.

Garside and Lake’s appearances for Nottingham and Manchester in the Elite Series earlier this year might have made some Giants fans nervous but echoing the chimes of ‘Belfast or nowhere’ uttered by other recent signings, the pair have made their allegiances clear.

Alongside the growing number of returning players, there’s another fresh face in the form of 25-year-old Jeff Baum. Hailing from Colleyville, Texas, the defenceman is no stranger to Belfast, having played in the Friendship Four for Providence in 2017.

This latest announcement brings the total number of signings announced by the Giants to nine, with further names expected to be announced soon.

Commenting on the signings, Belfast Giants Head Coach Adam Keefe said: “Preparations for the next season are gathering pace and we’re pleased to add these key players to our growing roster.

“We’re excited to have Mark Garside and Ben Lake back in Belfast this season; their experience, combined with their passion for this club and hunger to chase trophies is exactly what we need.

“We’re also looking forward to welcoming Jeff Baum back to Belfast – we have kept a close eye on him ever since the Friendship Four and he will bring a welcome injection of fresh energy to the team.”

Defenceman Mark Garside returns for his 11th season in teal in 2021/22. Having first signed with the Belfast Giants at 21, he has helped rack up an impressive array of silverware over the last decade, including three League and two Challenge Cup titles with 546 games, 55 goals, 150 assists on his all-time record.

He’s returning, as always, with his eye on the prize. Speaking ahead of the announcement, he said: “I like that we try to compete every year for the league title; winning is fun and I like the pressure of that as well – that pressure leads to a real sense of satisfaction when you do win trophies; it’s all about that for me.

“I’m very excited to be coming back to Belfast. I remember skating out on my first night in Belfast and there were a lot more people than I was used to. The year away has probably built that excitement up again – I can’t wait to get back in front of the fans.

“Every player that’s played here before – and there’s a few of us coming back – we remember the games like Cardiff where we had the full bowl and games with an electric atmosphere and it’s exciting to think we’re going to be able to do that again.”

Canadian Ben Lake returns for his second season for the Belfast Giants. The two-way centreman achieved 14 goals, 28 assists and 42 points before Covid-19 cut his debut season in Belfast short. He’s returning following his draft to Manchester in the Elite series, followed by his third outing for Team GB in the world championships this summer and there’s no mistaking where his allegiances lie.

Commenting on his signing he said: “Coming back to Belfast was a no brainer to me; I told Keefer and Steve that they don’t need to really sell the club to me anymore. My last season with the Belfast Giants was such a fun season and it was obviously cut short, so there’s definitely a little unfinished business.

“I wouldn’t want to play for any other team in the League, which is what I told them going into negotiations, so to be able to get a deal done and be able to come back is very exciting.

Texan Jeff Baum is the second new face to join the Belfast Giants roster for 2021-22. No stranger to Belfast, the 25-year-old defenceman played in the city, guarding Providence College's blue line at the Friendship Four in 2017. He’s been eyeing a return to Belfast ever since and says it’s a dream come true to be pulling on the teal jersey this season:

“During my freshman year, I got to play at the Friendship Four in Belfast. It was awesome. I’m really looking forward to coming back – this time I actually get to wear the jersey and hopefully be helpful for the team. I always hoped and dreamed that maybe one day I would be able to – I’m excited. I’ve heard a lot of great things about the fans in Belfast and I’m looking forward to seeing a packed barn.”