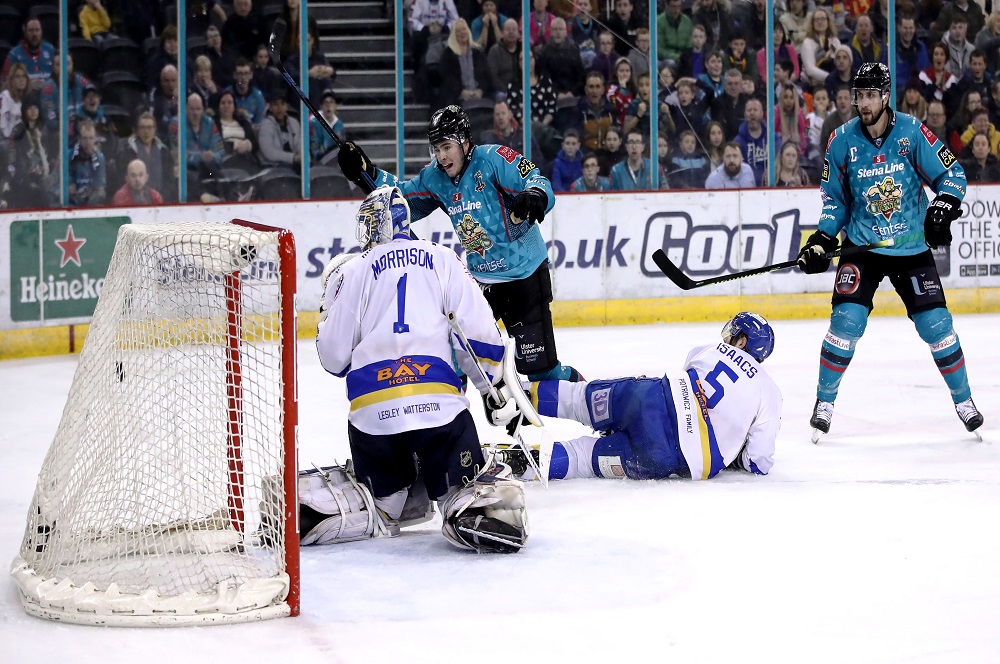 The Stena Line Belfast Giants edged out a huge win at The SSE Arena on Friday night in their lone game of the week. A 34-save showing from Shane Owen, goals from David Goodwin (x2) and Liam Morgan led the Giants to a 3-1 victory over the visiting Fife Flyers.

The win sees the Giants remain in third place in the Elite League standings. The Giants are now four points behind the Cardiff Devils in first place, on 60 points though the Welsh side have played two games less. The Sheffield Steelers remain in second place with 63 points from 49 games.

The Giants would be the ones to open the scoring at 13:58 of the first period. After sustaining pressure in Fife’s end in the early going, Belfast broke through when Curtis Hamilton took a shot from the face-off circle and David Goodwin picked up the rebound and tucked it past goaltender Adam Morrison. The goal was Goodwin’s 14th of the season.

With Kevin Raine in the penalty box after taking a two-minute penalty for interference, the Flyers would knot the game a 1-1 before the end go the first period. Paul Crowder fired a shot on goal, Shane Owen mishandled the puck, and Carlo Finucci buried the rebound before he could get to it.

The Flyers would head into the first intermission with a slight 16-15 edge in shots on goal.

After going over 30 minutes without either team finding the back of the net, the Giants would take a late lead at 54:15. Matt Pelech was robbed on a two-on-one by Morrison but the Giants regained possession in the offensive zone. Pelech got the puck back and worked it over to Elgin Pearce who found a streaking Liam Morgan who would roof a beautiful snipe over Morrison’s glove hand. The goal was Morgan’s 11th of the season and it gave the Giants a late 2-1 lead.

A few minutes later, the Giants would seal the deal with a key empty-net goal. Bobby Farnham was in the penalty box for high-sticking and the Flyers were putting on pressure, but the Giants managed a turnover in the defensive zone and David Goodwin would fire a shot from centre-ice into the open net to give Belfast a 3-1 lead. The goal, which came at 58:40, was Goodwin’s second of the game and 15th of the season.

That lead was all the Giants would need as they slammed the door in the final minute on their way to victory.

Player of the Game