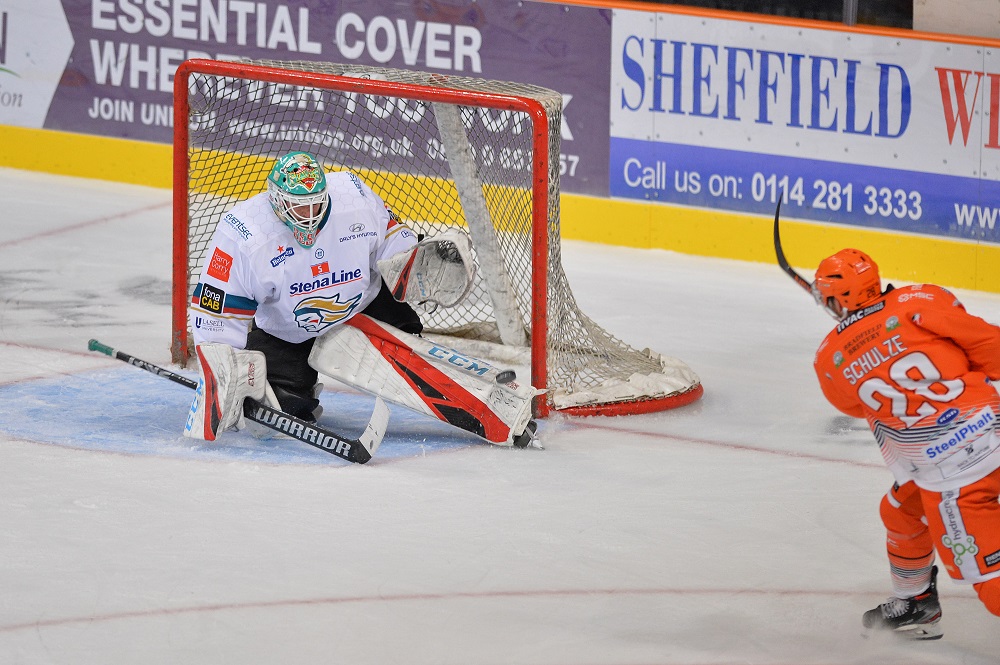 The Belfast Giants had a rough night at the Utilita Arena as five first period goals led to a 7-1 loss to the Sheffield Steelers in the Premier Sports Elite League.

J.J Piccinich scored his seventh goal of the season, but the Steelers were in an offensive groove and wrapped up a comfortable win on Saturday night as the Giants dropped to 2-3-0 on the season.

The home side started strongly and took the lead after just 3:19 when Great Britain international Evan Mosey batted Kevin Schulze's shot out of the air at the crease and poked it past Tyler Beskorowany from close range. (0-1)

The Giants responded within a minute, however, Piccinich skating into the zone and sniping one shortside on Steelers netminder Barry Brust from the left circle at 4:12. (1-1)

But the Steelers put daylight between themselves and the Giants with three goals in 2:33.

Anthony DeLuca began the offensive barrage, firing home at 11:53 (1-2), before Marc-Olivier Vallerand rifled in from the right circle on the powerplay at 13:22 with Kevin Raine in the box for holding. (1-3)

And things would only get worse for the Giants as Tanner Eberle added a fourth at 14:26, prompting stand-in head coaches Jeff Mason and Rob Stewart to call a timeout on the Giants bench. (1-4)

Sadly that would not improve matters as the Giants failed to score on a powerplay with Robert Dowd in the box for cross-checking, and instead Kevin Schulze struck on a breakaway at 19:23 to increase Sheffield's advantage. (1-5)

The Giants made a change at the intermission, replacing starting netminder Tyler Beskorowany - six saves - with Jackson Whistle and the new man between the pipes kept the home side off the scoresheet in the middle frame.

Unfortunately the Giants couldn't find a goal at the other end, despite having a couple of chances on the powerplay, including an extended 5-on-3 opportunity that the Steelers managed to kill off, taking the game to the second intermission with the score unchanged.

Belfast had to weather a long penalty kill early in the final period as Ben Lake, Scott Conway and Sam Ruopp all took turns sitting in the penalty box, but they managed to see all three out in a strong display from the special teams.

Ciaran Long had the best chance to add another goal before the final buzzer, the forward hitting the post with Brust drawn out of position, but that would be as close as the visitors would get to finding a second goal.

Instead, the Steelers would strike twice more, the first coming on the powerplay after Ruopp headed off for cross-checking - which also included a 10-minute misconduct penalty - as Matias Sointu fired past Whistle at 57:34. (1-6)

And the scoring was rounded off by Great Britain defenceman David Phillips, who shot through traffic in front and found the twine at 58:59 to complete a miserable night in Sheffield for the Giants. (1-7)