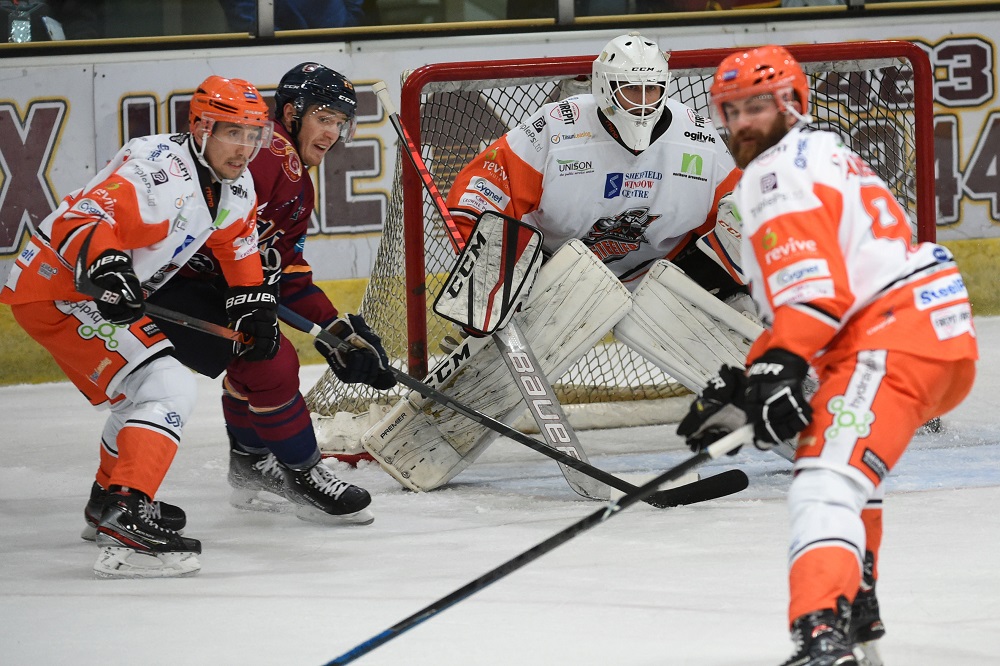 A couple of Sheffield Steelers goals before the game was 10 minutes old staked them to a lead they would never relinquish on their way to a 6-3 win over the Flames on Spectrum ice.

Martin Látal started Steelers off when he converted an early powerplay less than 3 minutes into the contest and they doubled the spread at 9:39 through Robert Dowd then carried that margin into the middle frame.

Dowd extended just 85 seconds after re-start. Jesper Alasaari got that one back with a successful one timer on an ensuing powerplay, but they would start the final set with the home team still 2 goals off the pace.

The visitors put the game out of reach before the midway point in the 3rd when Justin Hodgman and Dowd’s 3rd of the evening 58 seconds apart made it 5-1. Brett Ferguson cut into it with a 57th minute goal and Mac Howlett made it 5-3 at 59:12, but a last second empty netter by Jonathan Phillips capped off the Sheffield success.

“Sheffield jumped on us early,” explained Head Coach Paul Dixon, “and it does make the rest of the night feel like a lot more work when you are playing a couple of goals behind not long after the opening puck drop. We never recovered on the scoreboard obviously, but it didn’t seem like we ever even got a spark back to be able to get back into it.”

“Where I thought we were pretty solid for the full game the night prior, we were a lot more stop and start on Sunday and had some positive moments, including finally getting a couple near the end, but too many times when we definitely didn’t look as fresh as we might have hoped for.”

“When you combine that with a Steelers team who were clearly up for it and played an excellent game from the goalie out, from start to finish, you get this kind of result.”

“We can’t dwell on it too long and we have to get back to it this week in training and see what we can do better to work to get a result against Dundee Stars on Saturday.”