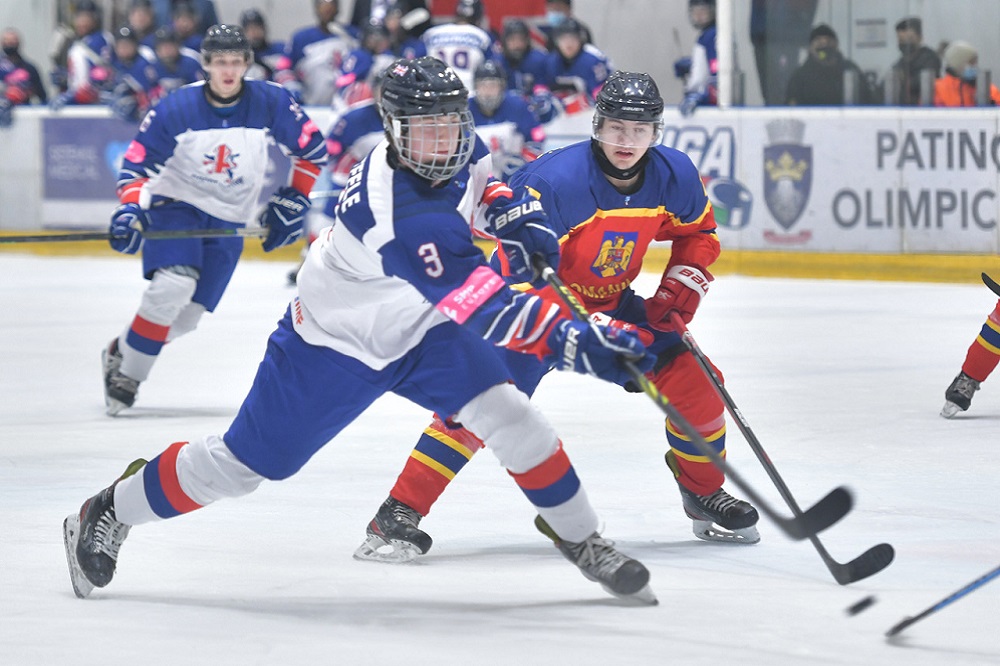 Great Britain's hopes of promotion are over after they were beaten 4-3 by hosts Romania in the IIHF Under-20 World Championship Division II Group A in Brasov.

Italy are promoted to Division I Group B with a game to spare, while GB will have to settle with a fight for the silver or bronze medal on the final day of the tournament on Sunday.

Neilson gives GB first-period advantage
GB went ahead at 2:06 through Neilson's neat backhand finish after Jack Hopkins broke into the zone and provided the perfect pass.

It was mostly one-way traffic with Bayley Harewood having three chances on the same shift, while Alex Graham, Liam Steele and Zaine McKenzie also went close.

GB netminder Daniel Crowe - on his first start of the tournament - had to be alert to make a good save from Menyhert Lazar's shot from the slot, before Liam Stenton made a great diving slide to thwart a dangerous Romania two-on-one break.

Quick three-goal blast for Romania stuns GB
GB made the worst possible start to the second period as goals from Szilard Gyorgy (21:04), Tamas Kedves (22:06) and Rares Vasile (23:15) turned the game on its head.

Things looked bleak when Kedves burst through the GB defence to score his second of the night with a top-shelf finish (38:05), but GB got a lifeline with three seconds remaining in the period.

Great hustle on the left boards by Jack Goodchild forced a turnover and he fed Oliver Endicott, who tapped into the net from close range (39:57).

Super Howells goal proves in vain
Graham had an early chance in the third period as his shot was dropped by Mag but the puck was cleared off the line, before a solo effort by Hopkins drew a penalty, although GB were unable to capitalise on two successive powerplays.

With time running out, an outstanding goal from Finley Howells pulled GB to within one as he deked his way past the Romania defence before slipping, but he still managed to score through the five-hole while down on the ice (53:45).

Brine made a series of outstanding saves in the closing stages - including shutting the door on Szilard Gyorffy's penalty shot - but GB were unable to find a way past Mag at the other end.

Grubb: We made too many mistakes
Head coach, Martin Grubb, said: "We knew coming into the game that we needed a result to give ourselves a chance at gold and ultimately a massively disappointing second period has ended that dream.

"We made too many mistakes that get punished at international level. We needed to make sure our execution and game management was better.

"Romania were a desperate team as they knew a loss meant relegation. We spoke about how we had to outwork them and make sure we played fast, simple and direct.

"Unfortunately, that middle period we put ourselves in a hole we couldn’t get out of. We have to regroup and stick together as a group.

"We need to finish as strong as we can to make sure that this tournament has a positive ending for us and the support back home."

There are no games tomorrow but GB round-off their tournament on Sunday against Italy (14:30 face-off UK time).