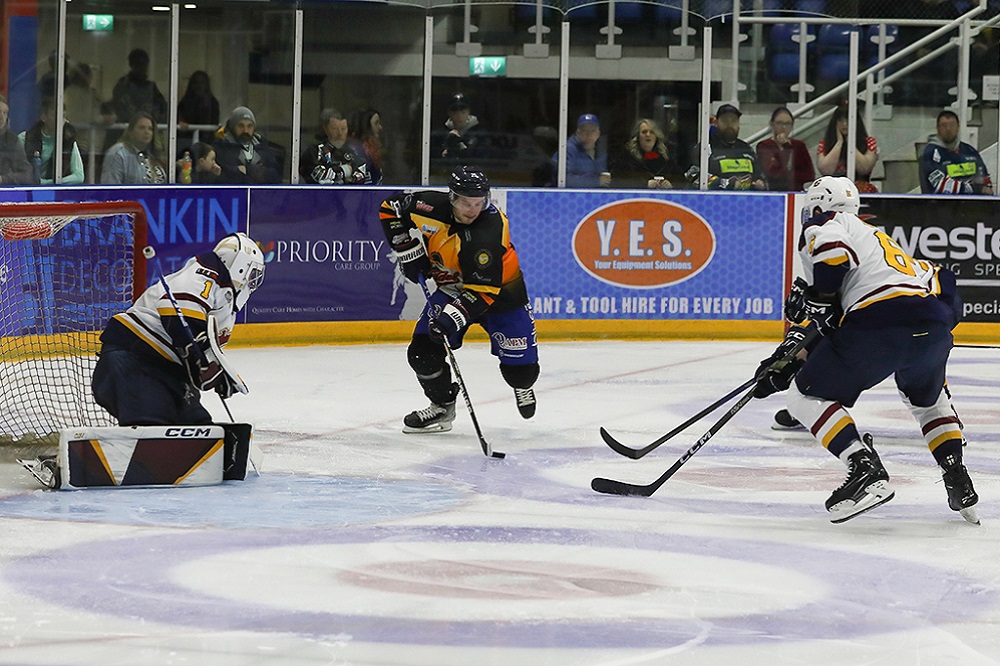 Huge win for the Guildford Flames

It took 19 minutes, 59 and a half seconds to finally get a goal, but that turned out to be the first of 5 unanswered for the visiting Flames as they fronted a Taz Burman shutout on the way to a 5-0 win at Dundee Stars.

About halfway through the opening set, a Brett Ferguson goal only lasted as long as video review so the teams headed into the back stretch still as the game began. Eventually, with Dundee holding a 15-11 shot advantage, it looked like the period would close on a scoreless draw but with half a second on the clock Sam Marklund did get the visitors a lead ahead of the break.

Jordan Klimek doubled the difference at 28:14 on a powerplay and Marklund’s 2nd just past the game’s midway mark had Surrey’s team with a 3 goal gap through 40 minutes.

33 seconds into the 3rd, again on a powerplay, Daniel Tedesco increased it to a 4 goal cushion and a late Ferguson add on completed the final tally.

Taz Burman turned aside all 34 shots to record his first professional clean sheet, while Francis Marotte stopped 34 of 39 sent his way.

“These long trips are ones that are notoriously difficult for the road team,” said Paul Dixon, “so to come in here and have this kind of success is a real credit to the guys for being able to put in a very good performance and a great job by Taz to make sure Dundee couldn’t get back into the game.”

“It is a huge game tomorrow against Sheffield. We have a long journey back, but hopefully we can be ready for what their high end skilled team will bring.”