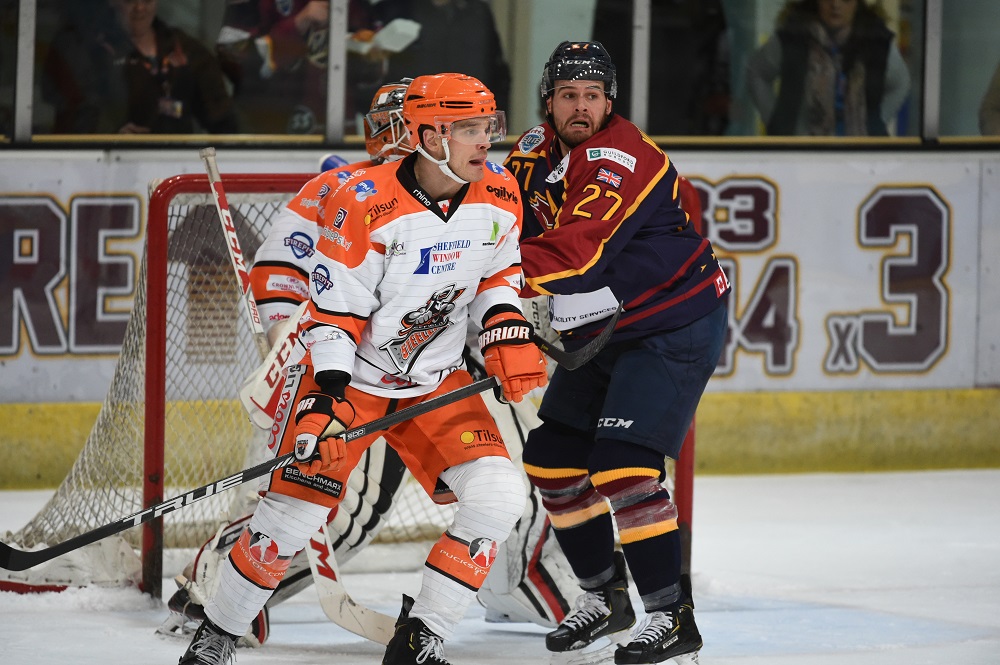 Flames jumped out to a 3 goal lead in the opening frame before moving on to a 4-2 home ice win over Sheffield Steelers.

Jamie Crooks got Flames started on a powerplay when he redirected a TJ foster pass at 9:04. 57 seconds after that Ian Watters got a stick on a Calle Ackered one timer to put the home team up by a pair. Cam Braes extended the difference at 14:52, but Steelers trimmed their deficit immediately with a long David Phillips blast that caught the stick of Eric Meland.

A Steelers’ 5 plus game for crosschecking to Marc-Olivier Vallerand put Spectrum’s men on an extended powerplay and they converted about 2 minutes in, just over the game’s halfway mark, with a Kruise Reddick bullet from the blue line to make it a 4-1 count, but on the 2nd of back to back Steelers powerplays late in the frame the visitors pulled that one back through Lucas Sandstrom.

“Obviously in terms of rebounding from last night, we are thrilled with the way we got started tonight,” said Paul Dixon.

“Certainly getting a good lead, which was opposite to last night, made our lives much easier in terms of playing smartly when in front instead of being forced into chasing all night long.”

“That is definitely one of the top clubs in the league, so getting a split against Sheffield and grabbing the win on home ice is a weekend we can be happy with as we move into next on the schedule.”