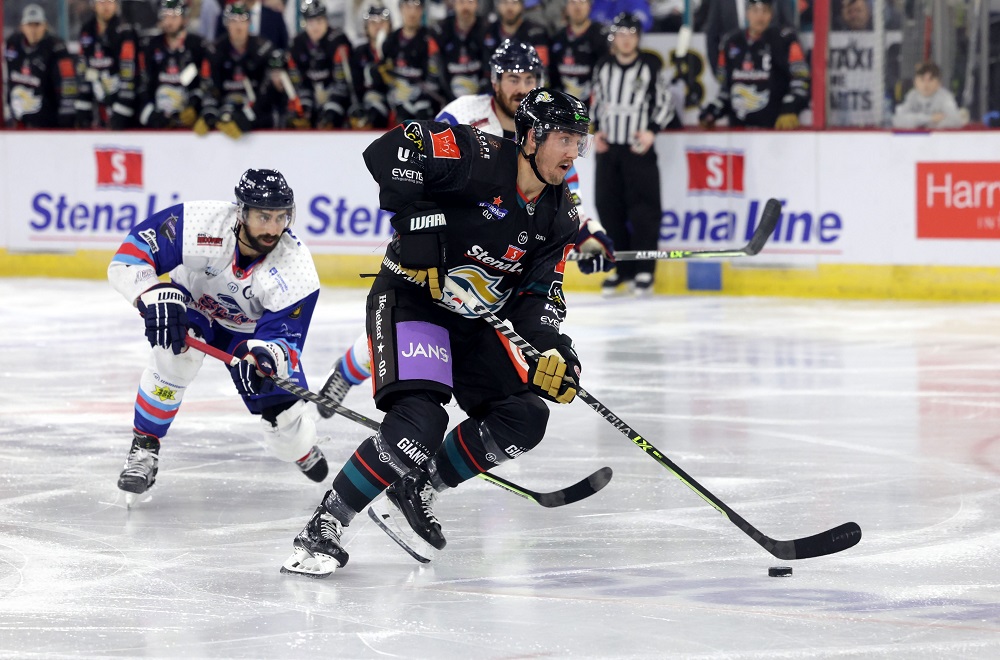 The Stena Line Belfast Giants emerged from a wild midweek encounter with a shootout win over the Dundee Stars, with penalty shot goals coming from Ben Lake and Chad Butcher after the sides couldn’t be separated through regulation and OT.

Giants’ goalie Peyton Jones also made a perfect four saves in the shootout to help his side to two points.

A slow start to the game saw Belfast’s first chance coming in the eighth minute, when Captain David Goodwin was denied in stunning fashion by Stars goalie Anton Svensson, who dropped a pad to block the point-blank one timer.

However, he could do nothing when Goodwin squared a pass to the right circle and found Matt Foley, who unleashed a vicious shot to send the Giants into the lead at 11:25. (1-0)

Tyler Soy and David Gilbert combined well in the zone with 2:28 remaining, but Svensson turned away the danger when Gilbert snapped a quick shot from the left.

Belfast’s Mark Cooper was unimpressed with a hit thrown by Ryan Verrier at 18:32, dropping the gloves in a short-lived tilt which earned both men 5 for fighting.

The Giants found themselves with an early 5 on 3 penalty kill inside the opening minute of the second period as Colby McAuley sat for interference at 20:52, followed 4 seconds later by Gabe Bast for a dubious tripping call in the Giants’ zone.

But the drama didn’t end there. As Ben Lake surged forward short-handed, Svensson left his crease, throwing his body at the puck in the slot. Lake was sharp on the resulting penalty shot but failed to find an angle to tuck it away.

The Stars drew level on the power play following a time out from head coach Jeff Mason, as Ben Sokay poked the puck home from the edge of the crease at 22:37. (1-1)

The Giants were unsuccessful on an Ian Parker goalie interference call at 23:10, but retook the lead when Gabe Bast sent a cannon from the top of the right circle over the blocker of Svensson at 27:06. (2-1)

The Giants returned to the power play when Craig Garrigan served a too many men call at 34:57, before Scott Conway was helped down the tunnel by Giants staff after what appeared to be horrific low contact from Erik Naslund. Naslund was assessed 5+ game for kneeing and made his way for an early shower as the Teal Army made their feelings clear.

To the utter amazement of everyone, Conway emerged from the tunnel for the third period and resumed taking regular shifts.

The mayhem of the second period gave way to a comparably quieter third. A Craig Garrigan tripping penalty at 52:40 proved fruitless for the Giants power play unit, and a late breakaway by Mark Cooper was swallowed up by Svensson before time elapsed and the sides headed for overtime.

The sides couldn’t be separated by a chaotic period of sudden death 5 on 3 OT, and in the shootout a stellar string of saves from Giants goalie Peyton Jones was met with goals from Ben Lake and Chad Butcher to hand Belfast the second point, and the win.