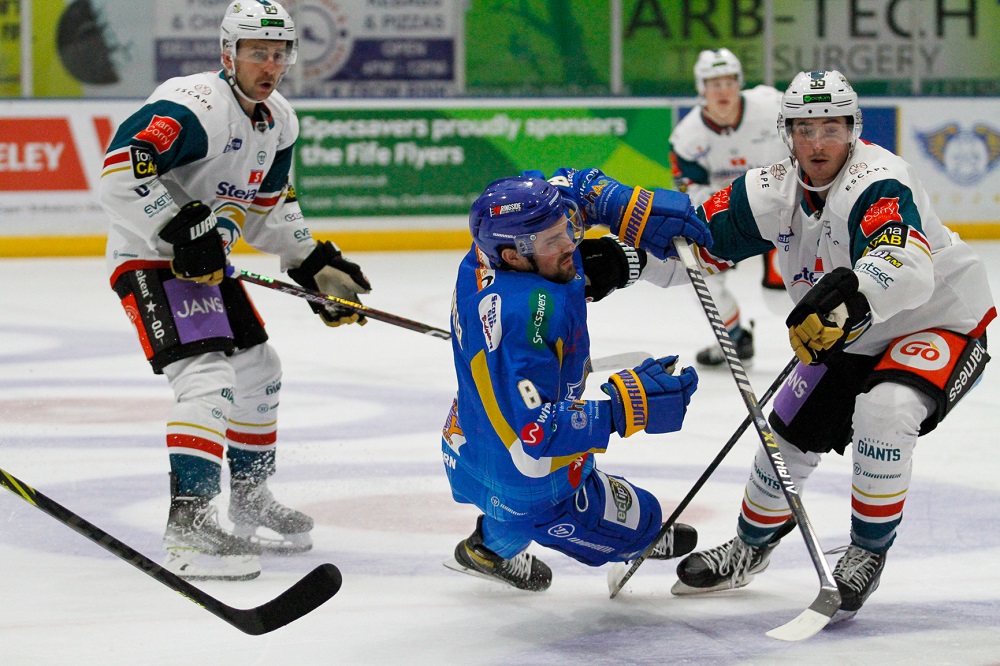 The Stena Line Belfast Giants left it late in Kirkcaldy on Saturday night, with a short-handed winner in the 59th minute from defenceman Sam Ruopp sending Adam Keefe’s side back across the Irish Sea with two Premier Sports Elite League points.

A speculative shot from Brayden Sherbinin just inside the right side of the blue line sailed through traffic and caught Giants’ goalie Peyton Jones unaware at 2:10. (1-0)

Belfast began to work their way off the back foot through the midway point of the period, and despite enjoying long spells of possession and the lion’s share of shots on goal, they lacked quality in front of former Giant Shane Owen in the Flyers crease.

Mark Garside headed to the box with 48 seconds remaining in the period for a tripping call in the Giants zone.

The Giants wasted no time in resuming their attack, camping in the Flyers zone throughout the first 5 minutes before David Goodwin came agonisingly close in a 1 on 1 with Owen, but fired wide, much to his own frustration.

Thankfully for the Giants, their persistence paid off when Mark Cooper’s left circle one-timer, off the rebound, hit the net with immense velocity at 25:41. (1-1)

The Giants missed an opportunity to edge their first lead of the game at 35:11, when Bari McKenzie sat for a hooking call which incensed the Flyers fans in attendance.

A well-placed poke check separated Ben Lake from the puck as he pressed down on the Flyers’ goal in the 45th minute, as an attritional game of tight margins entered its home stretch.

A Janne Kivilahti charging penalty at 47:56 sent Belfast back onto the power play. Darik Angeli came close in the zone, but a strong pad save by Shane Owen kept them at bay.

There was no call on the play when a monstrous hit by Belfast’s Will Cullen up-ended Shawn Cameron, as the Flyers forward broke into the Giants zone short-handed. Despite the clean contact, Cameron was helped down the tunnel by Flyers staff.

Darik Angeli marked his return to the Giants line up with the go-ahead goal, unassisted, from the right circle at 52:13. (1-2)

But it was short-lived as Christian Hausinger drew the Flyers level on the power play (Conway, hooking, 55:24) with a rocket over Peyton Jones’ glove. (2-2)

The ice looked to be tilting away from Belfast when Chad Butcher was called for illegal equipment after losing his helmet behind Shane Owen’s goal at 57:02, but defenceman Sam Ruopp was Adam Keefe’s cavalry at 58:15 with a well taken short-handed winner. (2-3) .