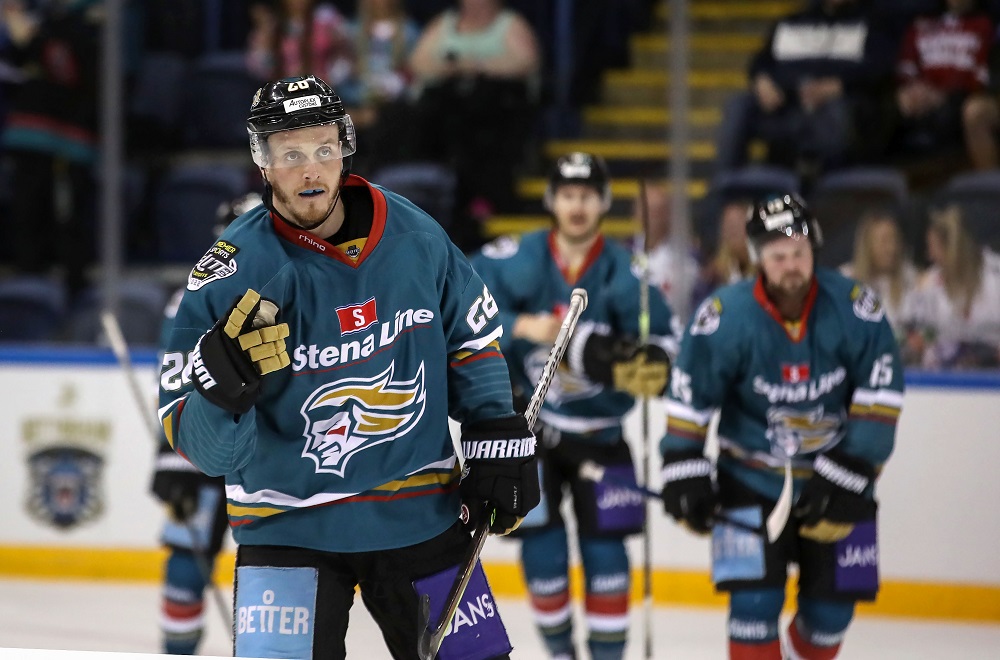 The Stena Line Belfast Giants ran riot in the opening Semi Final of the 2021-22 Premier Sports EIHL Playoff Finals weekend in Nottingham, as a Mark Cooper natural hat trick propelled Belfast to a 6-0 victory over the Dundee Stars and a place in tomorrow’s final, with a third Championship at stake.

The Dundee Stars tested Giants’ goalie Tyler Beskorowany early when Charlie Combs ripped a shot, which was gloved after 30 seconds. The Stars continued to capitalise on good early pressure when Seb Bengtsson split the Giants D and was denied in the third minute.

Omar Pacha’s side were probably the more composed across the first 10 minutes. Phillipe Sanche came close mid period when he found himself alone in the slot, save for a Mark Garside move to shut the attack down.

At the other end, Mark Cooper took possession at the blue line at 14:22 and skated the slot, sniping Stars’ goalie Adam Morrison with a wrist shot to edge the lead for Belfast. (1-0)

Following the drop, JJ Piccinich was robbed of a second for Belfast by a superb save from Morrison at the back door.

The period was 1:03 old when Mark Cooper slotted home his second of the game at 21:03, when Ben Lake’s overlap pass at the top of the right circle was converted top corner. (2-0)

It’s fair to say the Belfast Giants exploded into life offensively in the second period, despite weathering back-to-back penalties as David Goodwin sat for hooking at 23:51, and JJ Piccinich followed for slashing at 25:58. Piccinich was unfortunate not to create a third upon his release, as his puck to Scott Conway out of the box was just too tight to get the shot away.

It mattered little at 28:47 when Mark Cooper completed his natural hat trick, chipping down a Ciaran Long puck from the right circle in front of the crease (Second assist: Sam Ruopp). (3-0)

Gabriel Desjardins handed the Giants their first power play of the game at 35:30 with a holding call, but the sides were just back to 5 on 5 when Tyler Soy added a fourth off a beautiful between-the-legs back pass from Jordan Boucher in front of goal at 37:33. (4-0)

With a four-goal lead, Belfast’s defencemen stepped up to the blue line to cover off Dundee’s forwards, as their own attackers pressed high in the Stars’ zone.

A Connor Sills hooking call at 49:38 was converted by Lewis Hook at the back door after pinballing around in front of the crease to add a fifth at 50:08. (5-0)

Dundee managed one flurry of shots in front of Beskorowany with just under five minutes remaining, but the Giants’ goaltender showed why he was voted EIHL netminder of the season with a string of cartwheeling saves.

Sills returned to the box for roughing as frustrations spilled over at 56:57, and Giants’ Captain David Goodwin wasted no time in punching home a sixth at 58:02, as Mark Cooper picked up an assist to add to his hat trick. (6-0)

Charlie Combs headed to the box for high sticking at 58:47, leaving the Giants to coast their way into the Premier Sports Elite League Playoff Final with a dominant victory.