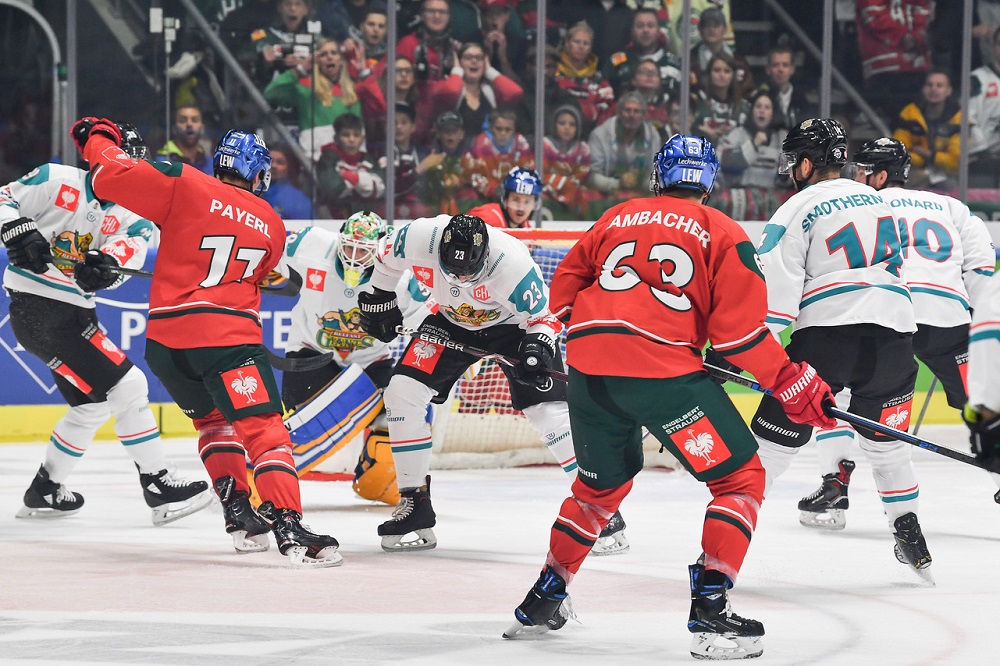 Giants Lose Out Late To Augsburg In Germany

The Stena Line Belfast Giants lost out 3-1 to Augsburger Panther in Germany on Sunday. Trailing by one with ten minutes remaining, the visitors equalised in dramatic fashion although the home side fought back to earn their first regulation win of the 2019/20 Champions Hockey League campaign.

The Giants showing in Germany was a memorable one - showing plenty of character and a resolute defence to keep the one of Europe’s best teams at bay for much of the game. Belfast had their chances also and came very close to a famous result against last season’s third placed DEL side. With two games to play - the Giants sit fourth in Group C, tied on four points with Liberec and four points behind both Augsburger and Lulea.

The atmosphere inside the Curt Frenzel Stadium was loud throughout the 60 minutes of action thanks to a near capacity crowd of Augsburg and 300 Giants fans. Shane Owen started in the Belfast net, posting 38 saves, with the Giants missing the injured Jesse Forsberg and the suspended Matt Pelech.

The opening period was an even affair with both sides trading blows. Shane Owen in the Belfast net and Augsburg’s Markus Keller both stood tall during penalty kills with the score deadlocked at the end of 20 minutes of action.

The deadlock was broken at 27:38 - the Giants had just killed off a productive Panther powerplay when Patrick McNeill’s shot was well saved by Owen and the puck fell to Matthew Fraser at the back post to squeeze home.

Giants Lose Out After Fight Back

The Giants were again called into penalty killing action in the final period and, again, they successfully kept Augsburg at bay and to within one.

At 51:21, they got their reward - Liam Morgan, the Giants top points scorer in the competition, fired the puck on net and Brian Ward’s clever redirect gave the visitors a deserved equaliser.

The home side hit back right away when Henry Hasse carved out space in the Giants zone to fire home an impressive slapshot at 52:45 and edge Augsburg in front again.

The Giants pulled Shane Owen in the final minutes and Augsburg’s Adam Payerl took full advantage, slotting into the empty net at 59:18 to give the hosts their first regulation win in the Champions Hockey League.