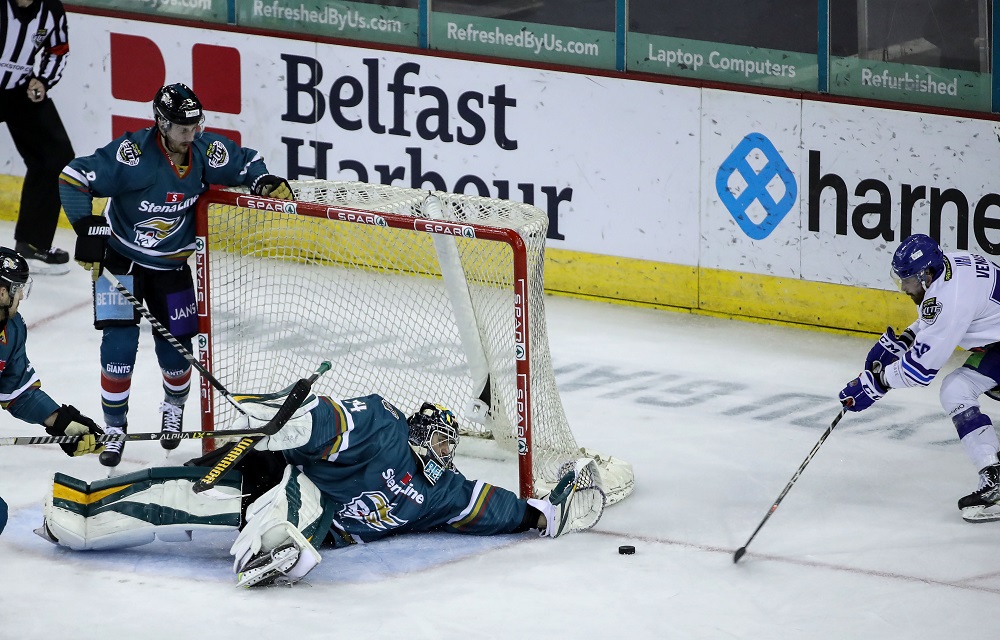 The Stena Line Belfast Giants stamped their ticket to the Premier Sports EIHL Playoff Finals in Nottingham next weekend in dramatic fashion, taking the two-legged series with the Coventry Blaze to overtime, a shootout and into the fifth round of sudden death, before JJ Piccinich scored the difference maker.

The Belfast Giants were held to perimeter offence throughout the first 10 minutes of the period, as Darcy Murphy and Jordan Boucher enjoyed hot starts.

Tyler Beskorwany was called into his first big test mid period, turning away a chip-down in the slot off a shot from the right with the butt of his stick.

Ciaran Long picked up Sam Ruopp’s cross-ice pass on the right side of the blue line and unleashed a rocket of a one timer which zipped just wide in the 11th minute.

Jeff Baum’s coast to coast effort ended in a collision with a Blaze defenceman in front of goal, and the bumper SSE Arena crowd voiced their frustration at the no-call.

Moments later, the crowd doubled down as Ben Lake appeared to have been held in the zone, but the referees appeared content to let the sides play.

Tyler Soy found the net early in the second period with the help of a generous rebound, flipping the puck goal-wards from a tight angle on the right at 25:52 (Assist: Lewis Hook, Jeff Baum). (3-2 AGG)

However, the danger hadn’t subsided, and Luke Ferrara’s slot one timer off the crossbar after the drop was a prelude to Conner Chaulk’s equaliser at 27:55; when his dangle at the edge of the crease snuck under Giants’ goalie Tyler Beskorowany’s left leg. (3-3 AGG)

Jordan Boucher’s shot on the turn from the edge of the crease brought the Giants close inside the last five minutes, after sustained zone time.

David Goodwin took the first penalty of the game when he was called for slashing at 36:41, calling Beskorowany into a critical save at the back door on the power play.

Tensions that had simmered throughout the previous fortnight boiled over at 38:51 when Sam Ruopp (unsportsmanlike conduct) and Coventry’s Ryan Penny (roughing) took a seat following a scrum behind the Giants’ goal.

Belfast had an improved start to the third period, with CJ Motte’s glove save off a Tyler Soy wrist shot - the highlight of the opening minutes.

The Giants’ first power play of the game was a welcome sight at 43:47 when Dane Gibson sat for hooking, but it was short lived as Scott Conway was called for high sticking at 44:11, followed by Cam Knight at 46:15.

Dillon Eichstadt’s delay of game call at 52:01 was a slow start for Belfast’s first clear power play of the game, but the second minute was an utter barrage of offence, which had the Blaze on the ropes. Still, they survived to see full strength.

The remaining minutes were end to end, with the Giants edging quality and number of chances on Motte. However, as it has done all year, the game was to be decided by OT and the shootout.

The Belfast Giants poured forward in OT, coming close when JJ Piccinich rang the crossbar from a mid-slot wrister with 2:55 remaining.

David Goodwin looked to have won it on Belfast’s fifth penalty shot following four misses from both sides, but Coventry came through in the clutch via Johnny Curran in their own fifth.

With the order reversed, Janne Kivilahti scored Coventry’s opening sudden death shot, but Scott Conway replied with a goal of his own with the game on the line.

JJ Piccinich clinched the winner in the fifth round of sudden death, following a Beskorowany save off Janne Kivilahti.

The noise in The SSE Arena was incredible, as the Belfast Giants booked their ticket to the 2021-22 Playoff Finals in Nottingham next weekend.