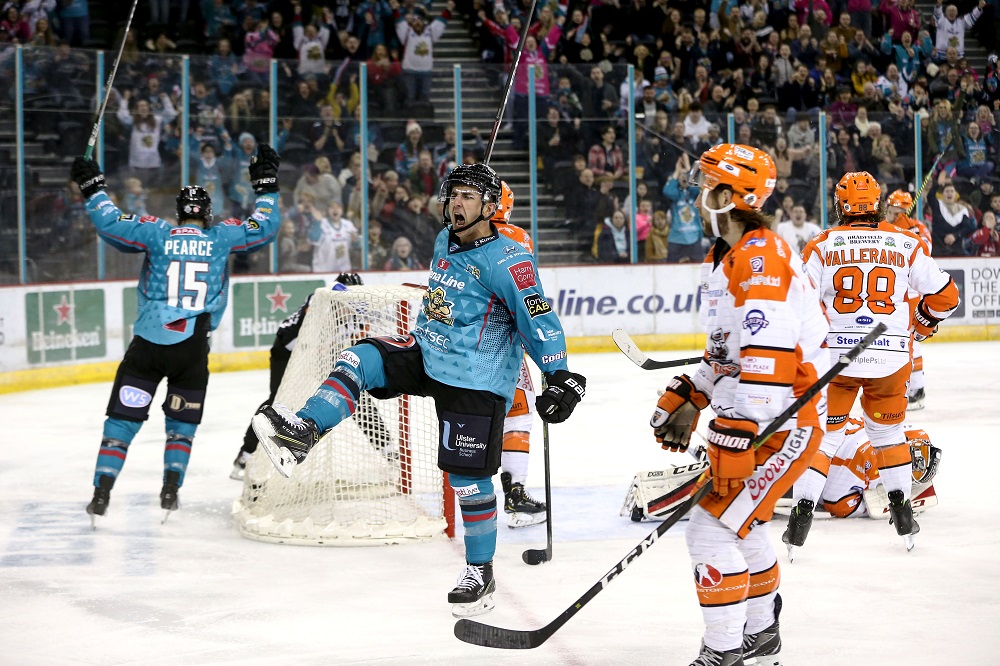 The Stena Line Belfast Giants took down the top team in the league tonight, beating the visiting Sheffield Steelers by a score of 4-2. Excellent goaltending from Shane Owen, who made 39 saves in the effort, coupled with goals from Bobby Farnham, Rickard Palmberg, David Goodwin, and Elgin Pearce led the Giants to victory. The win brought them to just five points back of Sheffield for top spot in the standings.

Shane Owen started in the Belfast net and posted 39 saves with the Giants missing Pat Mullen and Liam Morgan.

The game got off to a roaring, physical start. Early in the first, Kevin Raine took a two-minute penalty after slamming a Sheffield forward into the boards in the defensive zone. While short-handed, Ben Lake got himself on a breakaway after dangling a Sheffield defender, but he couldn’t get the puck past Steelers goaltender Tomas Duba. After killing the penalty, the Giants got a five-on-three power-play of their own but they weren’t able to solve a stingy Steelers penalty kill.

Sheffield would finally open the scoring at 18:32 when Nikolai Lemtyugov drove the puck around defenceman Mark Garside along the boards and then pulled it through the crease and tucked it past Shane Owen’s pad.

The lead wouldn’t last long as Bobby Farnham took a pass from Curtis Leonard in the neutral zone just outside the blueline and wired a wrist-shot between Duba’s five-hole. The goal, which came at 18:42, was Farnham’s 12th of the season in league play.

Immediately after the goal, Steelers defenceman David Phillips tried to start a scrap and got penalised for roughing. While on the man-advantage, Rickard Palmberg took a pass from Ryan Lowney at the top of the circle and wired the puck past Duba to make the score 2-1. The goal, which came at 19:49, was Palmberg’s sixth since joining the Giants.

The team teams played a back-and-forth frame, exchanging chances for the first 18 minutes of the second period, but it was the Steelers who would tie the game up at 37:34. After getting the puck deep in the Giants’ zone, Lemtyugov fed Josef Hrabal at the point who wired a shot that made its way past a screened Owen to knot the game at 2-2.

The scored remained tied heading into the final period with the Steelers carrying a slight edge in shots 27-24.

The Giants would grab the lead half-way through the third period. Mark Garside took a shot from just inside the point and David Goodwin, who was crashing the net, picked up the rebound and made no mistake, burying his seventh goal as a member of the Giants. The goal, which came at 51:08, gave the Giants a 3-2 lead.

With a minute left on the clock, the Steelers pulled their goalie for an extra attacker and threw an onslaught of opportunities on the Giants’ net, but Shane Owen stood tall. At 59:55, Elgin Pearce broke the puck out of the zone and wired a shot from half-ice into the open net to seal the deal.