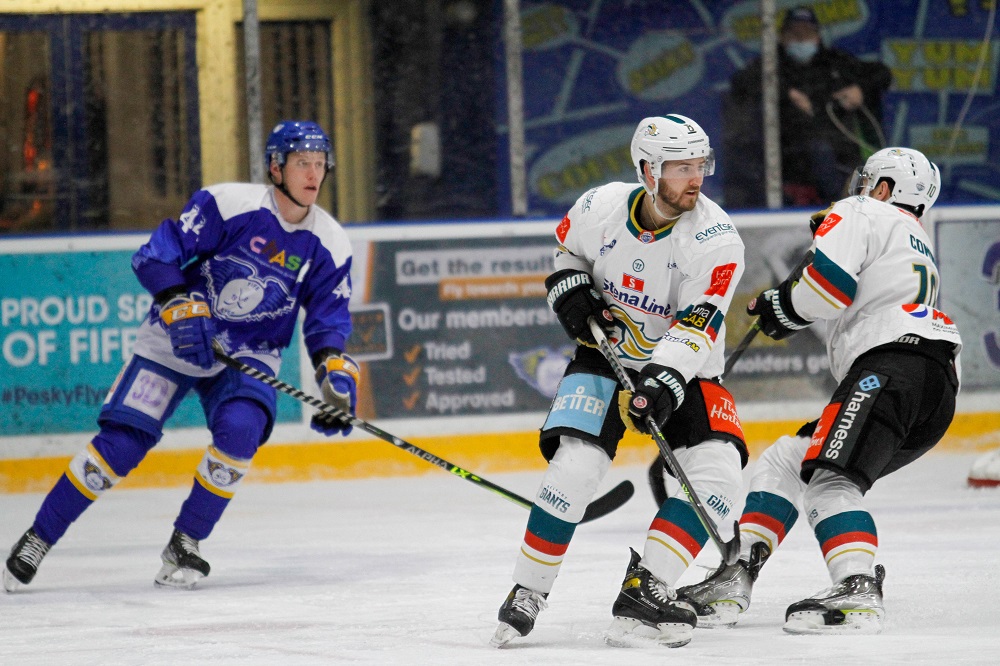 Flyers make it ten from ten on the Road

Goals from Mark Cooper and Jeff Baum saw the score locked at 2-2 after regulation.

The Fife Flyers were clearly glad to be back in familiar surroundings, taking the game to the Belfast Giants- who had won their first encounter of the weekend 4-1 in Belfast the night before.

The hosts found improved zone time throughout the opening period, which Tyler Beskorowany and the Belfast defenders were a match for.

Despite their offensive jump, a quiet period unfolded on the score sheet. There was, however, activity in the Giants penalty box as Slater Doggett took a seat for goalie interference at 10:19.

The Flyers managed to strike Beskorowany’s post inside the last five minutes courtesy of Brandon Magee, shortly before Scott Conway was called for high sticking at 19:11- leaving the visitors with 1:12 on the kill to open the middle period.

Not only did the Giants kill Conway’s penalty, they also found their opener courtesy of Mark Cooper from close range at 22:56 (Assist: Griffin Reinhart). (0-1)

As Belfast began to establish themselves in the game, the physical intensity noticeably increased. Still, the visitors went three for three on the power play when Lewis Hook sat for delay of game at 28:22.

The Flyers responded from the mid slot when Tommi Jokinen took the puck from James Anderson and fired home at 34:34. (1-1)

The game was in its 36th minute before Belfast had their opening power play of the night (Bari McKenzie, holding), but Fife stood firm.

A beautiful finish from Jeff Baum inside the last minute of the period proved vital, edging his side back into the lead at the break after a lengthy goal review (Assist: Mark Garside, Lewis Hook). (1-2)

A Carson Stadnyk tripping call should have been the golden opportunity the Giants needed to put the game to bed at 47:31. Instead, the hosts found their equaliser short-handed through Michael McNicholas at 48:18 (Assist: Greg Chase). (2-2)

Try as they might, Adam Keefe’s side could not find their elusive winner in regulation as the Flyers turned away wave after wave of offence - hindered by a Griffin Reinhart roughing penalty at 53:54, which they fended off bravely.

Time elapsed, and with a point secured, the Giants search for their tenth in a row would be decided by overtime.

Starting with Griffin Reinhart, Scott Conway and Mark Cooper; a too many men call proved the worst possible start for Belfast as Beskorowany and his D lines battled successfully to send the puck into the Flyers zone.

In a dramatic finish, with 7 seconds left on the Flyers power play a Brandon Magee tripping call at 62:04 handed the Giants a penalty shot to decide the game.

Up stepped the ultra-cool JJ Piccinich to dangle his way down the slot and tuck home the Belfast Giant’s tenth consecutive league victory on the road in Fife.