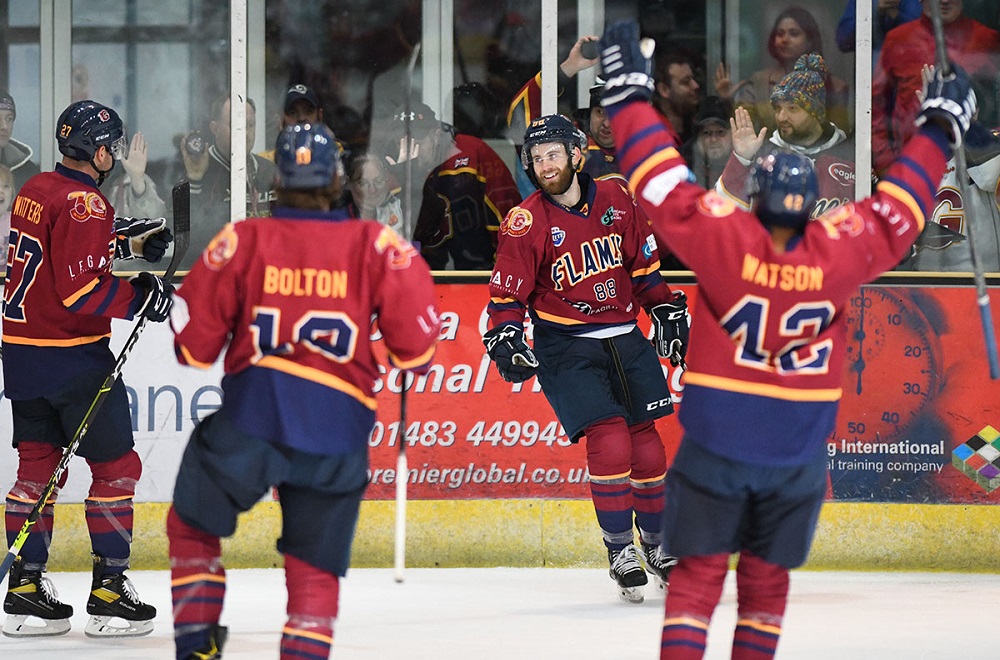 A pair of goals each by Chris Gerrie and Brett Ferguson along with singles by Robert Lachowicz and Ian Watters helped lift the Flames to a 6-1 home ice win over Fife Flyers.

Gerrie opened their account at 6:43 when he used a 2 on 1 decoy and opted to keep himself before slipping past Shane Owen for the lead. Gerrie repeated it at 11:23 with a similar puck handling feat to double a difference they would retain through the rest of the frame.

Flames added another when Lachowicz one timed a Gerrie feed near the midway mark and then Brett Ferguson re-directed Levi Cable’s delivery to make it a 4 goal margin in the 34th minute. Fife erased that one through Carson Stadnyk at 35:03, but a Flames powerplay goal re-stored the original 4 goal gap with Brett Ferguson’s net front tip at 36:16 and Ian Watters widened it further just over 2 minutes from period time in advance of a scoreless 3rd.

“I thought we jumped on them right away with possession early and a few good chances,” said Paul Dixon. “We know exactly what it feels like to travel all day and then try to be sharp at puck drop so when the other team is in that position you really want to take advantage.”

“We were fortunate enough to get a couple goals and then play with the lead for the rest of the night which makes the long travelling team’s job even more difficult than it already is.”

“We have played well recently even in some games where we have not come out on top, so we are very happy, obviously, to have been able to put together the performance and the win to send our fans home happy.”