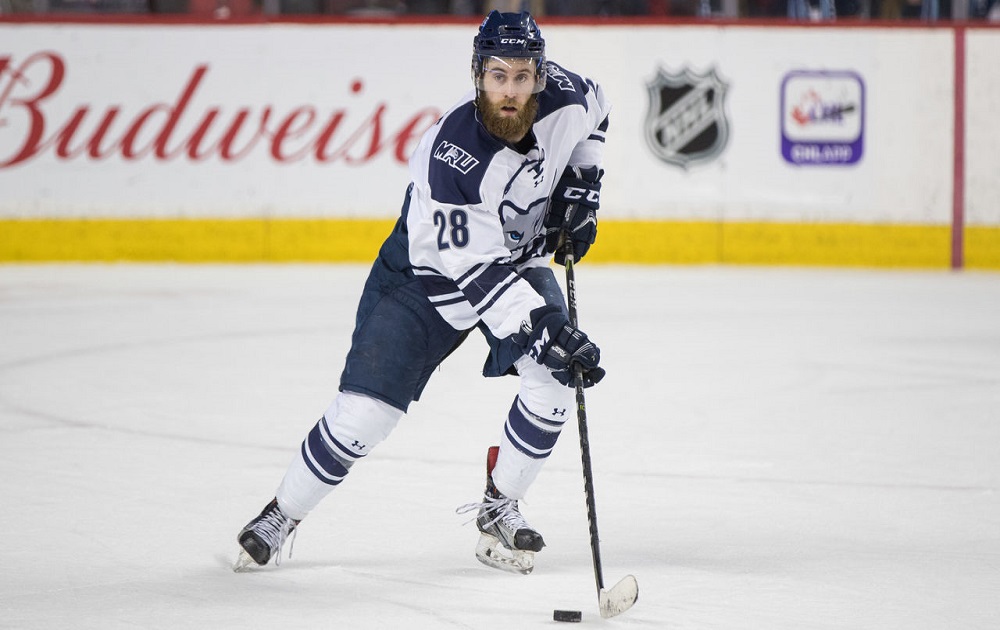 Canadian forward Chris Gerrie is the latest to join the Guildford Flames ice hockey club. The 5’10”, 175lb skater completed his final season at USports Mount Royal University Cougars in 2019-2020 where he had 9 goals and 11 assists across the 28 game schedule. It was his 3rd consecutive term with the Cougars after opening his college account at Michigan Tech where he helped the team to the NCAA’s WCHA Conference title in 2016-2017. Across 4 terms combining athletics and athletics, the native of Edmonton, Alberta, bagged 22 goals, 33 assists, and 55 points. Following the close of his university career, Gerrie made his pro debut with 1 ECHL game at Wichita Thunder in 2019-2020 and iced another during the 20-21 set.

“First off I would just like to thank the Guildford Flames for giving me the opportunity,” said Gerrie. “I am excited and very grateful to play for such a prestigious organization. I have heard nothing but great things about Coach Paul and the city of Guildford. I look forward to chasing a championship with the Flames.”

Gerrie played junior in Alberta and British Columbia, first spending a pair of campaigns between 2013 and 2015 at Olds Grizzlies in the AJHL while posting 43 goals and 115 points. His opening season earned him a league All-Rookie team selection, Rookie of year nod and top rookie across all Canadian Junior Hockey League clubs. He moved on to the BCHL for 2015-2016 with Penticton Vees, using a 16 goal and 42 point showing as a springboard to his Michigan start.

“Chris is a good skater, good with the puck, and can help out with a bit of offensive punch,” said Head Coach Paul Dixon. “We know he is very excited to get back to competing and we are glad he has opted to join.”

“He played alongside Jamal in university, and played against several of our current roster members, so one of the things we have been able to do with a lot of guys is bring them in at least to some other face they may know, much like we did when we first entered Elite League.”

“Looking at this season as a full re-start because of the circumstances we are coming off, we know that things won’t be super smooth right out of the gate, in many aspects of the organisation. Hopefully despite mostly a brand new roster we can use the bit of familiarity we think we have built in to give ourselves a head start in coming together as a team.”

“We think Chris fits right into the kind of team and culture that we seek, and we are looking forward to seeing him take his spot when things get going.”