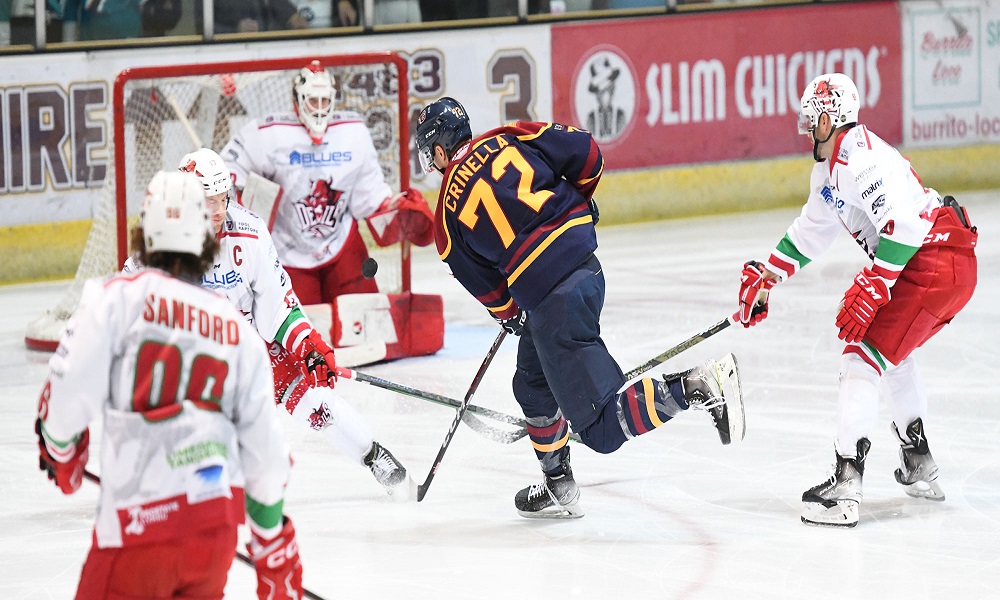 Flames recover to take the win

A couple of early 3rd period goals helped Flames dig themselves out of a 2 goal hole and earn a league table point and then add a 2nd thanks to another overtime goal by Bradley Lalonde to secure a 5-4 win over the visiting Cardiff Devils.

Devils jumped out to a 2 goal lead by the time the game was just over 5 minutes old thanks to Marcus Crawford at 3:10, and Ryan Penny at 5:12. Daniel Tedesco and Jake Coughler traded strikes in the 9th and 11th minutes, respectively, before an Owen Griffiths powerplay goal 17 seconds from time had Flames just a goal adrift through the opening frame.

There was only one marker in the middle set, and it was Cardiff taking another 2 goal advantage on the back of Coughler’s 2nd of the contest before halfway.

Just 97 seconds into the 3rd, Robert Lachowicz pulled the home team back within a goal, and shortly thereafter, Turner Ripplinger’s 1st of the season in league play had it all square at 4 goals each; the way regulation would close before extra time heroics 58 seconds into the tiebreaking stanza.

“Definitely not the kind of start we had planned for ourselves,” admitted Paul Dixon. “You never want to fall behind by a couple of goals early like that if you want to win a lot of hockey games.”

“We did improve in the 2nd, but still probably not quite where we needed to be, so we had nothing left to lose by the time the 3rd period started. Credit to the guys for digging and finding some way to bring the score back level.”

“By that stage probably a point from the game would have been something we would have taken, but they went out and did the work and they were rewarded with a win.”

“It’s a great outcome from a game where we definitely did not have a strong showing for a full 60 minutes. We will try and clean some of those things up and start to look ahead to Dundee Saturday and back here Sunday against Sheffield.”