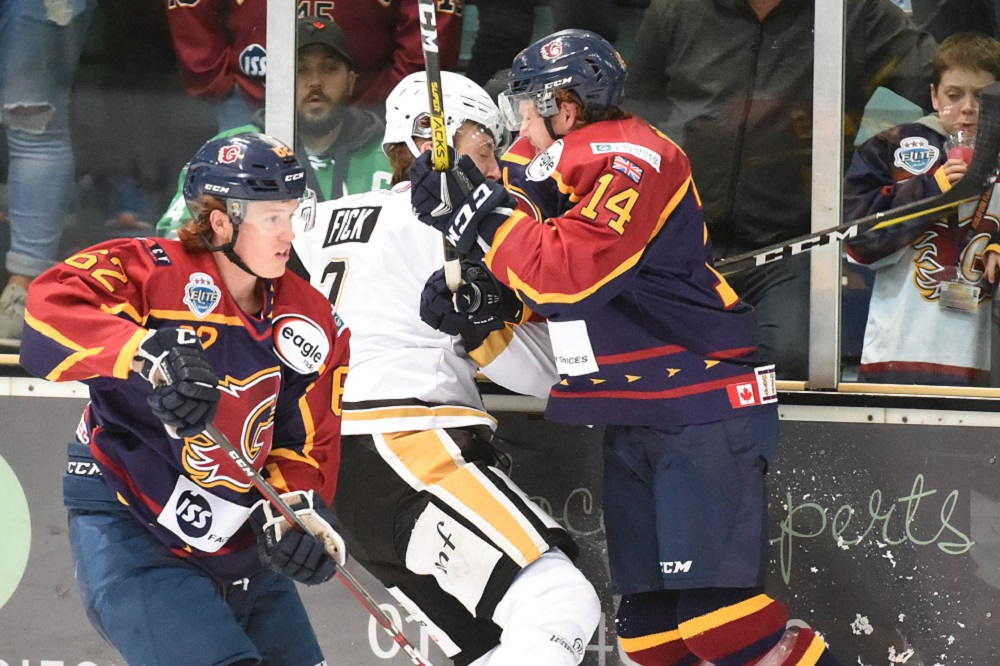 A couple of goals against no reply for the Nottingham Panthers erased a deficit and put them in front for good on the way to a 3-1 league win over the Flames on Spectrum ice.

A Panthers penalty a little over 6 minutes from puck drop paved the way for a Flames lead when Calle Ackered buried a Kruise Reddick feed. A 5 on 3 Flames powerplay shortly thereafter couldn’t double the spread, and the first 20 minutes of the new league season closed on the 1 goal margin.

The visitors pulled it level when they executed a perfect 2 on 1 finished cleanly by William Quist early in the 2nd. Just beyond the midway mark Jason Desantis, this one on a powerplay, set up the Panthers first lead of the contest. Surrey’s men spent most of the final 2 period minutes on the powerplay but in the end they went to break trailing by a single.

Flames killed off a couple of penalties in the opening half of the final frame, but just after getting back to even, Panthers put the game away when they extended their lead to a pair thanks to a Jens Jakobs strike that was the final goal of the contest despite the Flames skating the closing time with an extra skater in lieu of a netminder.

Travis Fullerton made 30 of 33 saves behind the Flames and Kevin Carr was 31 of 32 at the other end of the ice.

“It is a shame we couldn’t have found a way to increase an early lead especially with the stretch of 5 on 3 powerplay because we had a terrific start,” observed Head Coach Paul Dixon.

“We were right in the game all night, but Panthers do a good job of blocking lanes and limiting the higher end opportunities but we had enough chances to score more than a single for sure.”

“This is all part of the process of coming together and we have a lot of hockey ahead. It would be preferable to get back to it immediately tomorrow night, but that is not the schedule plan so we will take a couple of days off and hit the training hard again from Tuesday to try and sharpen up for the upcoming Cardiff-Coventry pair of games.”