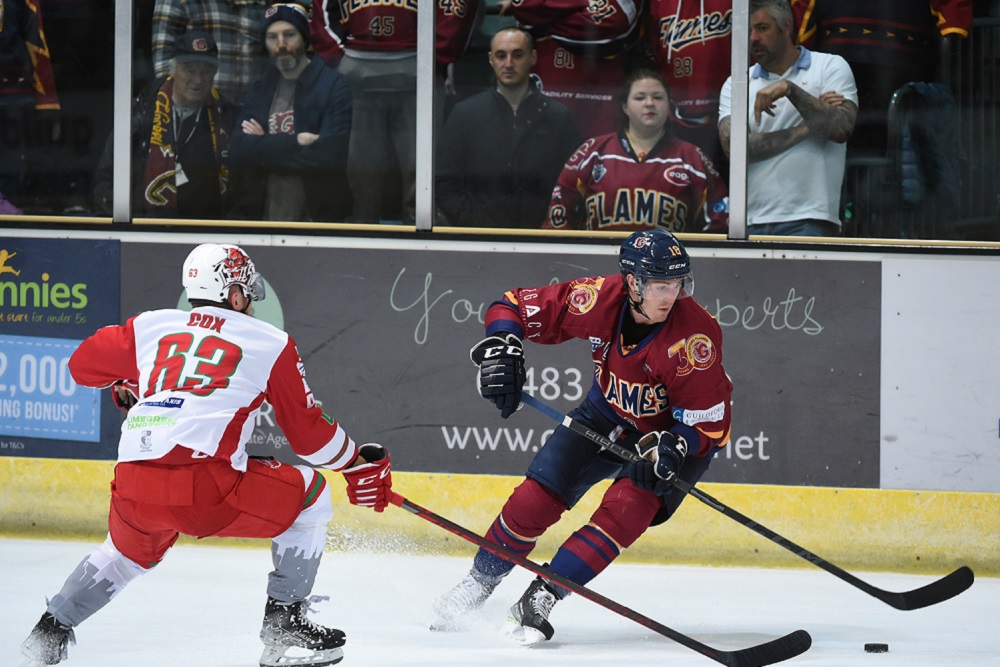 Flames lose out to Cardiff Devils

A late 1st period opener then a couple of 3rd period strikes by Cardiff Devils sent the Flames to a 3-0 cup defeat; their first regulation loss of the new season.

After a Josh Lammon starter late in the first, the Flames best opportunity to draw the game level was just under 5 minutes from the end of the 2nd. The visitors took a pair of minor penalties for too many men and roughing at exactly the same time to put a full length 5 on 3 powerplay to work, but the home team was unable to convert, and Devils lead held through the 40 minute mark.

The Welsh gang extended their advantage to a pair not long after re-start thanks to a Josh Batch goal at 42:18. Inside the last 5 minutes of the 3rd, it was the Devils turn at a short 2 man advantage and though they didn’t score 2 men up, they did score when it returned to 5 on 4 thanks to a Brodie Dupont one timer that capped off their success.

“It was sort of one of those games as it progressed that you kind of had a feel that scoring for us was going to be difficult, no matter what we did,” said Head Coach Paul Dixon.

“When you get a long 5 on 3 in a game and you don’t score you can’t help but look back on that and wonder what would have been different if we had been able to at least get one that would have had us tied going into the 3rd.”

“I don’t think we played poorly by any stretch, and we had some opportunities, but Devils did do a terrific job of clogging up the good shooting lanes and also making sure that generally if we did get a chance it was only one chance and not a load of follow up opportunities which are more likely to lead to goals.”

“Behind that, they also had an outstanding performance by their netminder and when an opponent has both those thing going, it is difficult to get something done against them so we have to tip our cap to them and start thinking about what we can do in training to gear up for next weekend.”