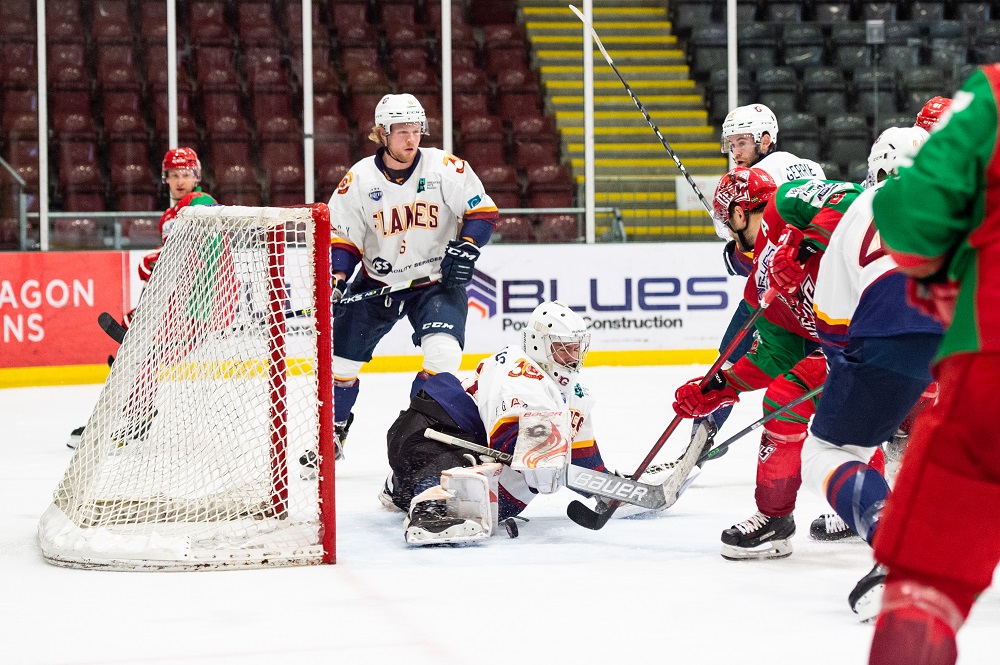 Playing with no supporters in the building to meet Welsh public health guidelines, the Cardiff Devils and visiting Flames kicked off the 2022 EIHL schedule with a low scoring affair, the home side using just a single goal plus an empty netter to pick up a pair of table points thanks to a 2-0 win over Spectrum’s men.

Devils bagged the winner when former Flames forward Joshua Waller put the Welsh outfit on the board a little under 8 minutes in. Flames couldn’t pull even despite late back-to-back Devils minor penalties.

In the middle set, the clubs traded a minor penalty each, but neither powerplay connected on those occasions and through 40 minutes the early single remained the only scoring on the night.

In the 3rd, Flames had a couple of extra man chances to level, including one with just over 3 minutes remaining, but Devils penalty killers remained perfect on the night to stave off overtime, then made good on an empty cage at 58:54 through Justin Crandall. Devils netminder Mac Carruth had a 36 save shutout while Kevin Lindskoug had 28 saves on 29 shots.

“We are frustrated right now, that’s for sure,” admitted Head Coach Paul Dixon.

“We certainly had the puck enough tonight and had enough shots to come out a little better in the scoring department than we did.”

“There is not a lot of time before tomorrow when they visit us to try and figure out a way to put some points on the board, but that’s the task ahead of us and we will try to make that happen.”

“We will have to forget this and hopefully do enough to earn a result for ourselves Sunday night, and that is now where our focus is.”