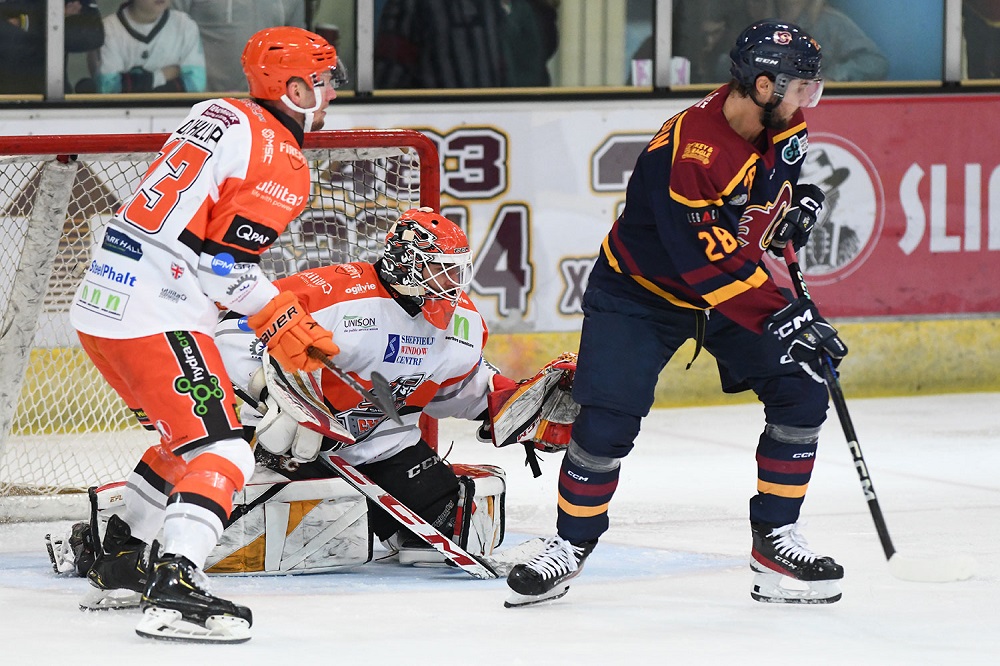 Flames go down to Steelers

Sheffield Steelers scored a pair of shorthanded goals and added a couple of others against a single Flames reply during a 4-1 defeat of the Flames on Spectrum ice.

Steelers were first to hit the scoresheet through Brandon McNally who bagged the opener at 11:33 and it stood the test of the remaining period time as Flames went to the 2nd a goal off the pace.

Just a few ticks into an early 2nd period powerplay, Peter Crinella levelled it at a goal each, but a shorthanded Steelers marker by Scott Allen beyond the halfway mark and his 2nd of the contest that survived video review inside the last 4 minutes of the frame had the visitors enjoying a 2-goal spread with a period to go.

In the 3rd, Steelers put it away in the 47th minute with their 2nd shorthanded goal of the evening thanks to a Tomáš Pitule strike that closed out the offensive count.

“We are definitely disappointed with that outcome, but we know we have better results ahead,” admitted Paul Dixon.

“Early on we looked like we should have been in front and had a good chunk of the play, but we went to the break down a goal and then Sheffield really pushed us in the 2nd for sure.”

“When you go to the powerplay, it is very difficult to overcome not only missing out on those opportunities where you think you might be able to connect, but conceding 2 goals the other way when you have a manpower advantage really hurts.”

“I don’t think it felt like it was truly a 3 goal spread on the run of play, but they made our mistakes count on their ledger. There is a lot of positive stuff for us to take from the weekend and we’ll get back at it this week and start working out a plan to be a little more consistent across the night and look forward to a better result.”