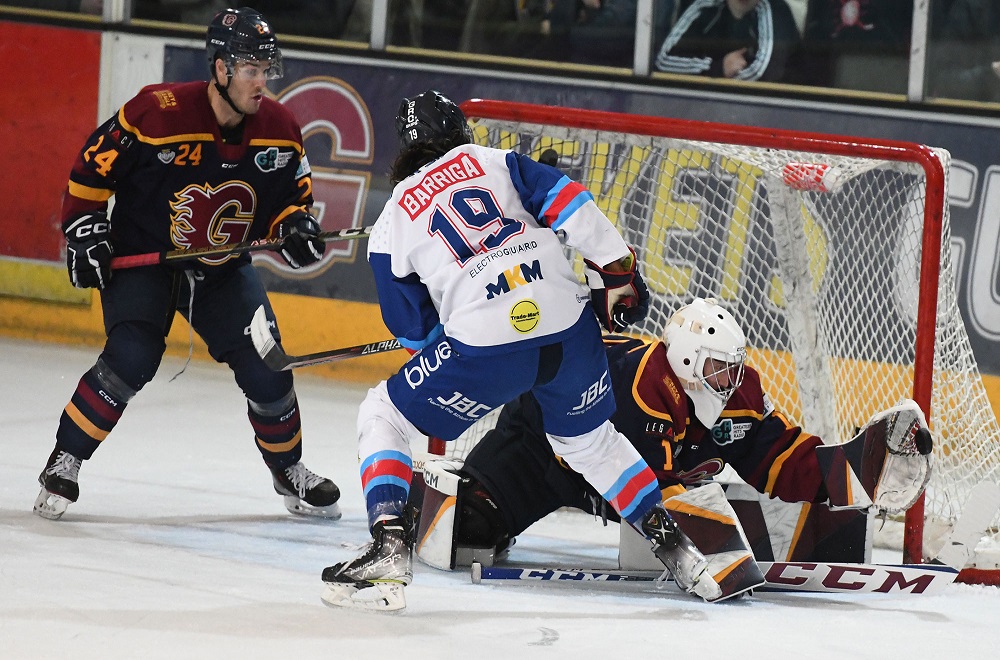 An on ice incident earlier in the day forced a significantly delayed faceoff, but despite the challenges, Flames wasted no time getting started by scoring 84 seconds in to start on a big lead that paved the way for a 6-3 win over the visiting Dundee Stars.

Mike Crocock gave Flames an early edge when he bagged the quick opener. A little over 2 minutes later, Ian McNulty doubled the advantage. About halfway through the frame, Robert Lachowicz made it a 3 goal spread and Bradley Lalonde sent the club to break up by 4 thanks to his strike at 15:44.

In the middle set, Stars got themselves on the board as they tried to pull back into the contest; Kris Inglis cutting the deficit at 24:35, but a Ryan Tait answer in the 33rd minute had Flames again holding a 4 goal cushion; this time with only a period to play.

Former Flames forward Chris Gerrie bagged one against old friends when he was on target at 41:57 and Benjamin Sokay brought it that much closer when he made it 5-3 in the 53rd minute, but with seconds to go, Sam Marklund closed the scoring when he found an empty net to complete the win.

“That was a real challenge for both sides having to sit on faceoff and keep waiting,” explained Paul Dixon.

“It was an uncontrollable situation so all anyone can do is be patient and try to get things going. For us, we are just glad that we were able to get some good fortune early, and be in a position to dictate the night a bit more because we were in front pretty much from the off.”

“Dundee really clawed back, and you have to give them credit for not quitting at all. There was a point when it looked like it might be a really one sided score, but they put us on the back foot when they needed to and pulled it a lot closer with a lot of time left.”

“We will take the win, which is a great outcome to have both sets of weekend points, and now look ahead to Wednesday night against Cardiff.”