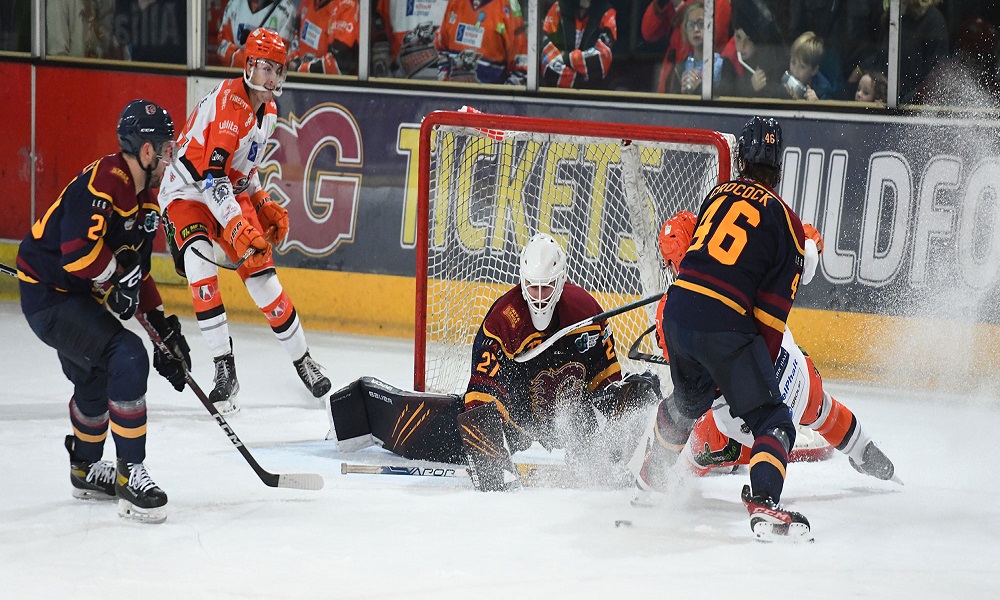 Flames lost the handle on a big lead when the visiting Sheffield Steelers dug their way out of a 3 goal hole, eventually stunning the home fans by delivering a 5-3 defeat of Spectrum’s men.

Sam Marklund pushed Flames in front during the 7th minute, and Ben O’Connor bagged one against his former club at 13:27 to send the home side to break up a pair.

A few minutes beyond midway, Daniel Tedesco opened a 3 goal gap for the Flames, but a late period Flames powerplay went sideways when Steelers turned the table with a Daniel Ciampini shorthanded strike that trimmed their deficit to begin the 3rd.

It took less than 4 minutes of the final set for Steelers to fully erase the difference thanks to Adam Raška at 42:09; a goal Flames challenged and lost which put the visitors on a powerplay they immediately converted through Sebastien Piche 69 seconds later. Inside the back half of the frame, Brendan Connolly secured the winner to close the gap from 2nd to top in the league table race.

“I think a loss like that stings a bit more when you have squandered a lead like we had,” explained Paul Dixon, “but they were the better team tonight and although they had to come from behind like they did, the score at the time it was 3-0 was probably not at all a fair reflection of where they were in terms of overall play.”

“Eamon stood very tall early on against some high-quality chances when we were extending an early lead, and Sheffield scored only by having relatively constant pressure, shot volume, and high-quality chances that basically made it only a matter of time before they found a way through.”

“It’s not the game or the outcome we wanted tonight, but we are having a lot of success, so we are not going to get to bogged down by one result. Instead, we will look ahead to a full training week and try to be ready for a visit to Fife, before back home here to Dundee Stars.”