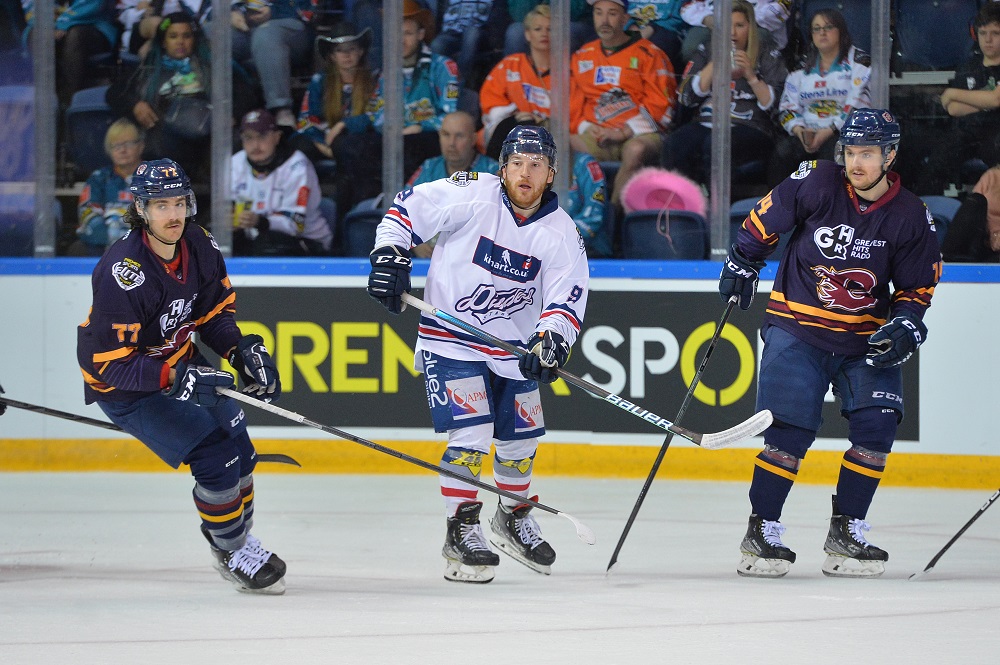 In the playoff 3rd-4th place game Sunday afternoon, Flames lost the handle on a 2-goal 3rd period lead to fall into deficit, but replied with 3, including a late empty netter, in the final 6 minutes to secure a 7-5 win over Dundee Stars to close out the season for the respective sides.

Jordan Cownie got Flames started at 6:10. Philippe Sanche opened Stars account a couple of minutes later, but a Kyle Locke strike about midway through the Frame had Flames in a lead at the break.

Early in the 2nd, Sebastian Bengtsson levelled for Stars, but another Cownie goal at 32:49 and an Ian McNulty follow up 22 seconds later had Flames in front by a pair through 40 minutes.

Stars began their rally at 42:58 through Charlie Combs and Connor Sills tied it at 48:35. They had their first lead of the contest at 53:40 through Michael Poirier, but Levi Cable answered 61 seconds after that to deadlock it at 5 each and Brett Ferguson bagged the winner on a powerplay just under 2 minutes from time before Owen Griffiths scored an empty netter with 45 seconds remaining.

“Obviously it is not the Final we wanted to be playing in today, but when you get out there on the ice, you want to win anything there is a chance to win,” explained Head Coach Paul Dixon.

“We fell behind late in the game and it would have been easy for guys to throw in the towel with just 5 or 6 minutes left in their season, but that’s not the team we have here, and they kept pushing themselves onto a win.”

“There is no question we are still disappointed with not being in today’s championship final. Only time will take the sting out of that, but these guys did themselves proud for what they did this weekend, and for how they closed out the last month of the season to even be in a position where we were 1 goal away from the championship game.”

“Thanks to all our supporters for being behind us all season long, through the ups and the downs, and we look forward to being back in front of you when the new season starts.”