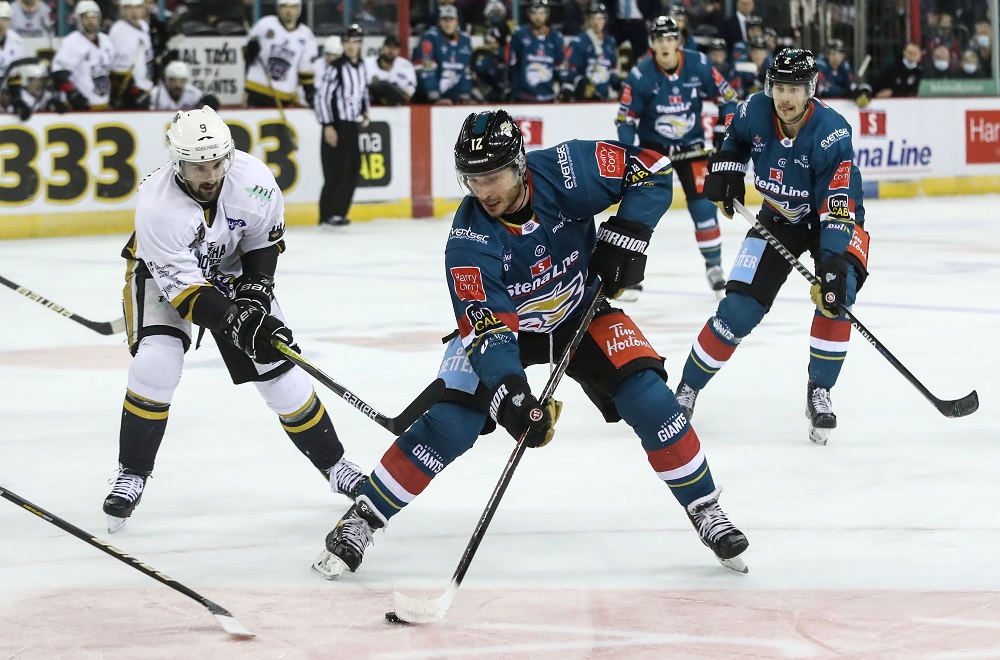 The Belfast Giants completed a four-point weekend with a 7-2 victory over the Nottingham Panthers on Sunday afternoon, with the help of a Scott Conway hat trick.

Panthers goalie Kevin Carr left the game through injury midway through the second period, on a weekend where Belfast had been struggling with injury problems of their own.

Down on bodies and leaning on the services of local talent for the second night of this weekend’s homestand, the Belfast Giants got off to a strong start against formidable old foes the Nottingham Panthers.

A Matthew Lane hooking penalty at 4:07 looked to be one of the best power plays that Belfast hadn’t scored on so far this season. Their movement in the zone was razor sharp and Panthers goalie Kevin Carr was called into regular action.

However, with two seconds of Lane’s penalty left, Tyler Soy snapped a wrist shot from left of the slot and sent the arena to their feet. A well-deserved goal for an intense shift. (Assist: Jordan Boucher, Lewis Hook). (1-0)

A 12th minute pass from the left to David Goodwin in the slot was kept out by a stellar Carr glove save; and at the other end, the referees looked at a potential Panthers goal on the edge of the crease which was waved off.

Not only did the Belfast Giants weather four penalty minutes (Jeff Baum, slashing, 12:51 & David Goodwin, boarding, 16:08), but they found their second courtesy of a poised Kevin Raine at 18:31 (Assist: Scott Conway, JJ Piccinich). (2-0)

Lewis Hook got the second period off to a perfect start when a no look backhand pass from Tyler Soy found the Giants number eight in front of goal at 20:52. (3-0)

For as good as Belfast had been up to this point, a rare Tyler Beskorowany mistake was costly at 25:12, when the goalie mishandled the puck in his trapezoid, leaving Jeremy Welsh with a wide-open net. (3-1)

Kevin Carr left the game at 34:44 after a JC Brassard cross check into the back of Jordan Boucher sent him over the top of the goalie in the crease. After extended treatment, he left the ice to loud applause from the Teal Army and was replaced by backup Will Kerling.

Nottingham’s fortunes only got worse with a Robbie Baillargeon cross checking call at 36:07, opening the door for Scott Conway to strike from the right circle on the 5 on 3 power play at 36:20 (Assist: JJ Piccinich, Mark Cooper). (4-1)

Matthew Lane pulled one back for the visitors at 39:02, breaking from a big chance at the other end unassisted. (4-2)

Lewis Hook repeated his early second period heroics with his second goal of the game at 40:57, with the help of another beautiful set up by Tyler Soy. (5-2)

A beautiful piece of individual skill was to follow when Scott Conway broke away down the slot, dangling his way past defencemen and the goalie for Belfast’s sixth at 47:47 (Assist: JJ Piccinich). (6-2)

A Brady Norrish interference penalty resulted in a goal mouth scramble as the Giants surged in the offensive zone. The last touch, and a hat trick goal, came from Man of the Match Scott Conway at 57:24.

The noise from the stands was even more thunderous moments later, as Mack Stewart was announced as first assist; his first point as a Belfast Giant. (7-2)