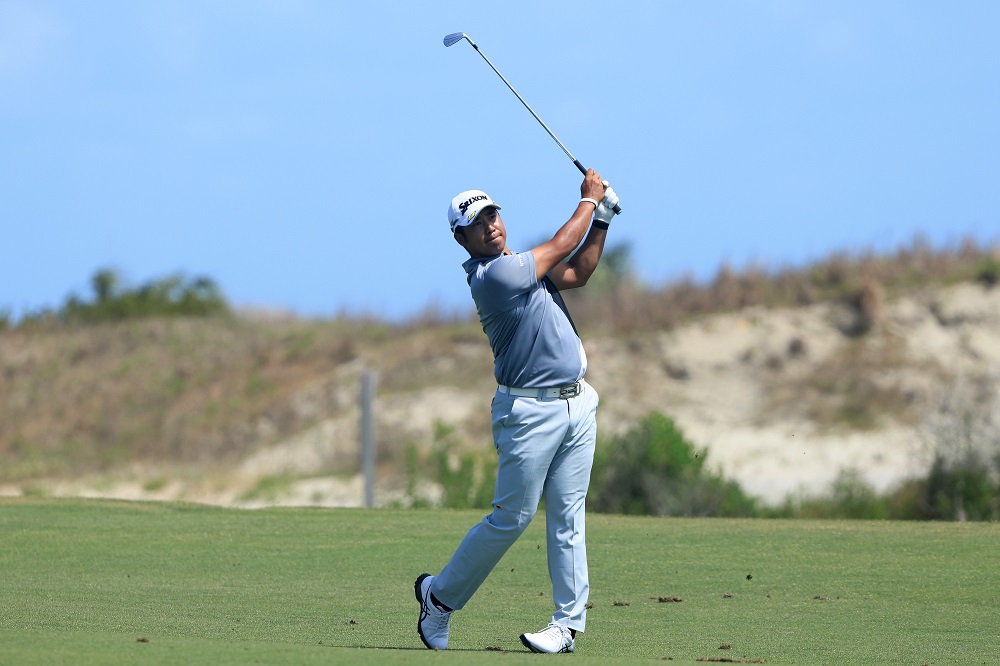 Matsuyama moves up at halfway stage

A month after securing an historic victory at the Masters Tournament, Japanese star Hideki Matsuyama continued his impressive showing in the Season of Championships, firing a 3-under 68 at the PGA Championship to move ominously into a tie for fourth on Kiawah Island.

The 29-year-old sits just two back of 36-hole co-leaders Louis Oosthuizen and Phil Mickelson as he makes a bold bid to win consecutive majors championships. South Africa’s Oosthuizen was 6-under and in sole possession of the lead until his lone bogey dropped him into the two-way tie, while the 50-year-old Mickelson was the story of the day with his morning 69.

Korean star Sungjae Im continued his own impressive showing at the Ocean Course with a solid level-par 72 and he will enter the weekend in a share of seventh alongside 18-hole leader Corey Conners and three others. The 23-year-old Presidents Cup International Team star posted matching 36s on both nines, as birdies at the par-5 seventh and par-4 14 offset bogeys at Nos. 3 and 14.

Matsuyama, the first Japanese male golfer to win a major, was even-par for the day until making his move at the par-4 sixth, posting the first of five birdies over his next eight holes. He followed it up with another on the ensuing par-5, then made his surge up the leaderboard after making the turn, carding birdies on three of the first four holes.

After entering the day in a share of 41st place, the six-time PGA TOUR winner found himself just two back of the leader Oosthuizen entering the toughest stretch on the course. He managed to save par at the 15th after hitting his 4-iron into the left bunker but wasn’t so lucky at the last, when he failed to get up and down, settling for bogey. He enters Saturday at 3-under 141 alongside South Africans Branden Grace and Christiaan Bezuidenhout.

“I really hit my driver and second shots very well today, and that gave me a lot of birdie opportunities, which I was able to capitalize on,” said Matsuyama after his round. “It looks like you have to accumulate a lot of birdies, as many as you can, until you get to 14, 15. Those last four or five holes are very difficult. Being able to make birdies on those downwind holes makes it a whole lot easier because you're not under the pressure. You can lose a stroke here or there on the final holes.”

In April, Matsuyama produced a glorious one-stroke victory over Will Zalatoris to win his first major championship which sparked tributes and adoration from across the world. He was also the recipient of the prestigious Prime Minister’s Award which he received last month from Japanese Prime Minister Yoshihide Suga while at home after the Masters.

At Augusta National, Matsuyama was three shots off the lead after two rounds and he finds himself one shot closer to the lead this time around. However, with swirling winds making life difficult this week on what is proving to be a demanding golf course, Matsuyama knows he needs to keep his head down and keep grinding.

“Yeah, it's up to the weather what's going to happen between the morning wave and afternoon on Saturday and Sunday. However, hopefully my play today will carry over to the weekend,” said Matsuyama, who is only one of two male Asian golfers to win a major.

Korean Byeong Hun An rounded out the list of Asian players advancing to the weekend, as a second-round 75 was enough to finish at 4-over, one shot clear of the cut line. Recent PGA TOUR winners Si Woo Kim and K.H. Lee both missed the cut, as did Thailand’s Jazz Janewattananond and Japan’s Takumi Kanaya. 2009 PGA Championship winner Y.E. Yang was disqualified for signing an incorrect scorecard.