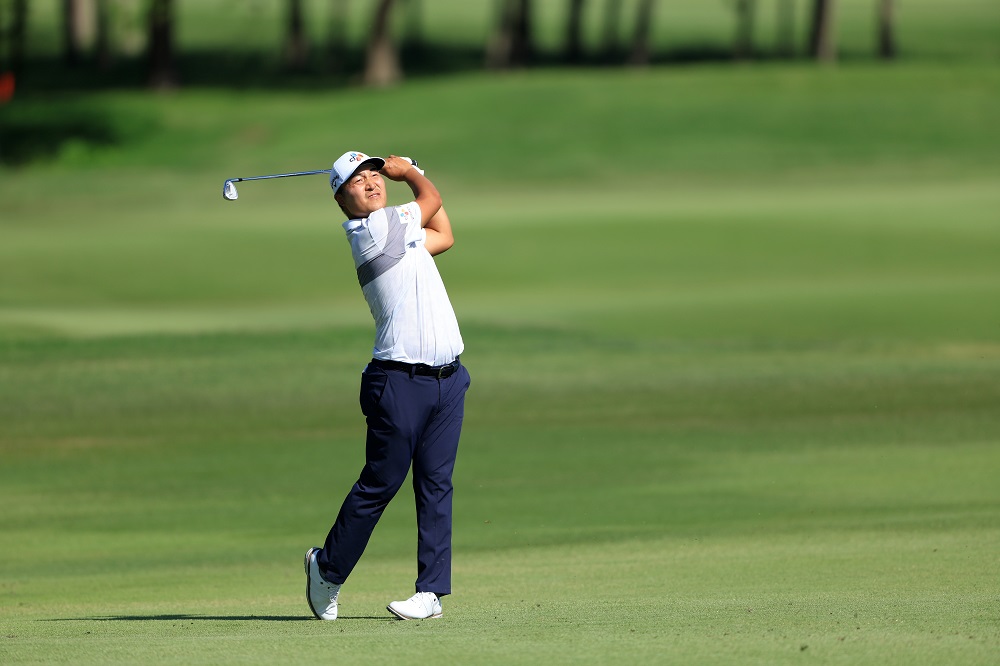 Korean Lee off to a flying start

Title holder K.H. Lee of Korea enjoyed a stellar opening round of 8-under 64 at the AT&T Byron Nelson on Thursday as he reaped immediate rewards from recent personnel changes and reverting to a faithful putter.

The 30-year-old Lee outscored playing partners Scottie Scheffler, the current FedExCup and World No. 1, and hometown hero Jordan Spieth by three strokes as he ended the day at TPC Craig Ranch four back of leader Sebastian Munoz of Colombia.

With two eagles on his card, Munoz became the first player in PGA TOUR history with multiple rounds of 60 or better in the same season (60/R1/The RSM Classic) and tied the 18-hole tournament record as he chases a second career win.

Lee went back to former swing coach, Chris Mayson and mental coach, Jung Gu Reen last week in a bid to improve his form which has yet to yield a single top-10 this season. He also hired a new caddie, Dan Parratt who previously worked with Byeong Hun An, and put his two-ball putter back in his bag and the results were immediate as he finished tied 25th at the Wells Fargo Championship last Sunday following three successive missed cuts.

“I had a pretty good round today, just like last year. I feel good. I think good momentum is continuing,” said Lee, who opened with a 65 en route to his first PGA TOUR victory last year. “My iron and putting is getting better from last week. And it’s continuing until this week which makes me comfortable. I try to believe more in myself and that came out as a good result.”

Lee missed only one green in regulation and ranked second in Strokes Gained: Tee to Green which left a smile on his face after he shook hands with Scheffler and Spieth at the end of their rounds. His outward 31 comprised of five birdies all from inside of eight feet. After picking up a sixth birdie on 11, the Korean star rifled a three wood approach from 259 yards to 10 feet which he converted the eagle.

“Feels comfortable here. Like last year, played the first round with great players like Scottie Scheffler and Jordan Spieth, starting with a great guys was fun and I enjoyed it. I'm very happy. It feels like just yesterday I was holding the trophy but time flies fast. I have lots of good memories. As I come back, I want to play my best to win the trophy again,” said Lee, whose parents are on site with his family.

Following a career-best season in 2020-21 where he finished 31st on the FedExCup standings and missed out on the TOUR Championship by one rung, Lee admitted his game wavered as he tried to chase further improvements in his game.

“Frankly, I wanted to do better and improve. So I wandered around a bit. And from that, I think I lost more of myself and my game. I had good memories working with my old coach and I wanted to get my old self back. As of my mental coach, I have too many thoughts going on and I lost control. That’s why I asked for help,” he explained.

When he won the AT&T Byron Nelson last season, Lee swapped his regular two-ball putter to a blade putter just before the tournament started which paved the way to his career breakthrough. But after using the latter for much of the past year, he has opted to put his two-ball putter back in play since last week.

“I didn’t really meant it but the timing sort of worked out like this. I changed to blade about this time last year and changed back to two-ball putter recently. To be honest, my short putting wasn’t on and I felt anxious. Since I changed back to the old one, my putting was more consistent and I'm confident now,” said Lee, who is hoping to join Sam Snead (1957-58), Jack Nicklaus (1970-71) and Tom Watson (1978-80) as players to successfully defend their AT&T Byron Nelson title.