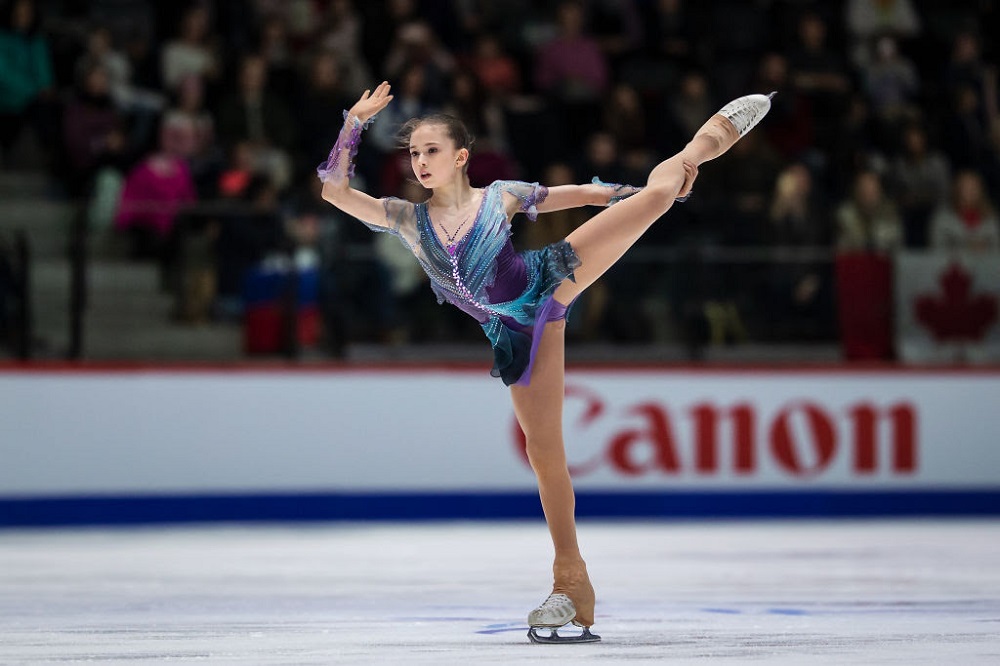 Kamila Valieva (RUS) and Ice Dancers Avonley Nguyen/Vadym Kolesnik (USA) skated off with the gold medals as competition concluded at the ISU World Junior Figure Skating Championships in Tallinn (EST) on Saturday. Russia was the most successful ISU member, taking eight out of twelve medals including three gold medals. The USA claimed a gold and a bronze, Japan and Georgia a silver each.

Avonley Nguyen/Vadym Kolesnik (USA) came from behind to snatch the Ice Dance title in what was a close and exciting competition. Georgia’s Maria Kazakova/Georgy Reviya made history to win the first ISU Championship medal in Ice Dance for their country. Rhythm Dance leaders Elizaveta Shanaeva/Devid Naryzhnyy of Russia had to settle for the bronze.

“It [the result from the ISU Junior Grand Prix Final] really motivated and pushed us, because all our competitors are very strong. But we just kept working and it just feels amazing right now,” Nguyen shared. “I've dreamed about this moment for so long and to know that our work finally paid off it just feels great. We're so happy, we're elated, we're just overjoyed,” she continued.

“Honestly, it's the biggest moment of my life happening right now,” Kolesnik said.

Kazakova/Reviya’s passionate and powerful performance to “In the End” was highlighted by innovative lifts, transitions and intricate footwork. The ISU Junior Grand Prix Final Champions collected a level four for their twizzles and the combination lift. However, the combination spin was rated a level two. The team scored 106.21 points and accumulated 176.19 points to remain in second place. Kazakova/Reviya competed in their third World Junior Championships as a team and had placed 9th in 2018 and 6th in 2019.

“We skated well, we're basically pleased. We did everything that depends on us. The most important thing is that people enjoyed how we skated. We gave it our all, the audience was very supportive, a big thank you to the spectators who came to watch. We'll move on, the most important things are still to come,” Reviya told the post event press conference.

Shanaeva/Naryzhny delivered a strong performance to “River” by Bishop Briggs, earning a level four for three elements to score 105.14 points. With 175.17 points total, they slipped from first to third.

“We really liked it here, it was an incredible experience for us. We are newcomers, it is our first season at this high level, therefore everything is new to us. Not everything worked out perfectly, but we've tried our best,” Naryzhnyy commented.

ISU Junior Grand Prix Final Champion Kamila Valieva of Russia scored a runaway victory in the Ladies’ event. Valieva won with 20 points to spare while teammate Daria Usacheva made it one-two for Russia by taking the silver. USA’s Alysa Liu (USA) moved up from fourth place to pick up the bronze medal. All three Ladies debuted at the ISU World Junior Figure Skating Championships.

Valieva shone in her elegant performance to “Exogenesis Symphony” by Muse, reeling off a quad toe-double toe combination, a triple Lutz-triple toe, triple flip-Euler-triple Salchow as well as two more triples and a double Axel. The 13-year-old only stepped out of her opening quadruple toeloop, but recovered instantly. Her exquisite spins and footwork garnered a level four. The ISU Junior Grand Prix Final Champion posted a new personal best with 152.38 points and racked up 227.30 points.

“There was a little mistake on the toeloop, but basically I am pleased with my performance,” Valieva said. “This was my first Junior Worlds. No matter what condition I am in, I have to come here and do everything I can do like in training, even if not everything works in practice,” she continued.

“I am so happy to skate clean, but all jumps I can do better,” the 13-year-old noted. “It was a huge experience and the atmosphere and the scale of the event is like at the Grand Prix Final, but the significance of the competition feels bigger. I really enjoyed skating here,” Usacheva added.

Liu landed a clean triple Axel and six more triple jumps in her routine to “Illumination” by Jennifer Thomas. However, she fell on an underrotated quadruple Lutz and also underrotated the first triple Axel (in combination with a double toe). The ISU Junior Grand Prix Final silver medalist scored 137.31 points and accumulated 204.83 points overall.

“I was very happy with my placement and I was very happy to be here. I don’t think the short program placement should affect how you skate in the free program. I think I kind of left it behind, it already happened and I can’t undo what happened so just skated my free skate,” the U.S. Champion commented.

Maiia Khromykh (RUS), who stumbled on a quadruple Salchow but produced seven triple jumps, pulled up from fifth to fourth at 198.24 points. Haein Lee (KOR) fell on a triple flip attempt and dropped from second to fourth at 194.01 points. Seoyeong Wi (KOR) placed sixth on 193.30 points.
The ISU World Junior Figure Skating Championships conclude Sunday with the Exhibition Gala.