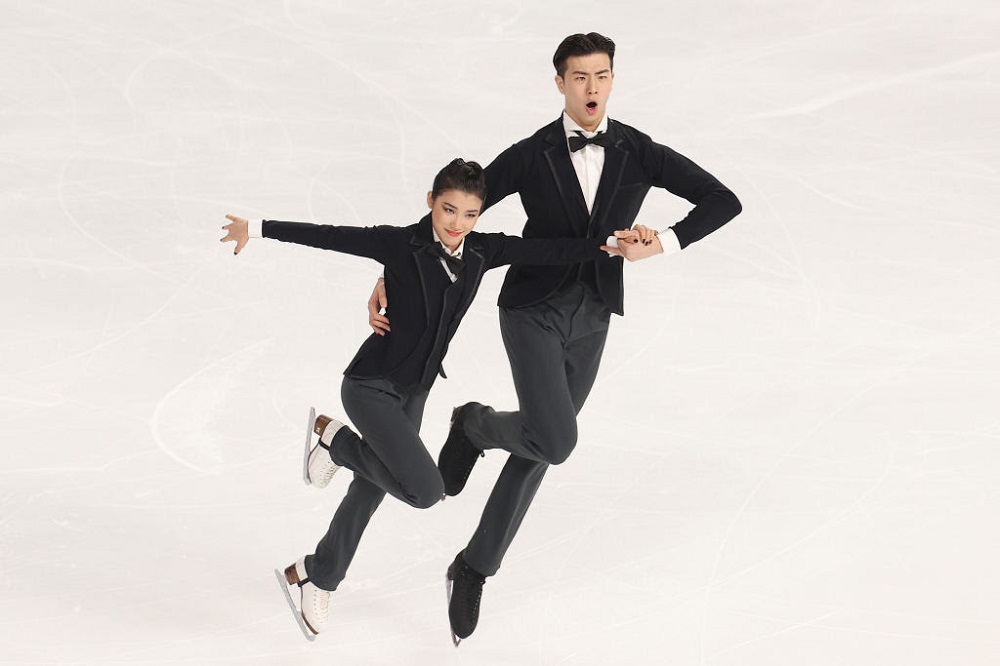 Wang/Liu delivered an inspiring performance of their “Charlie Chaplin” routine that was highlighted by fast twizzles, difficult steps and a rotational lift. The multiple National Champions earned a level four for the Finnstep Pattern, the twizzles and the lift while the Partial Step Sequence was rated a level three (for her) and four (for him). Wang/Liu scored 84.23 points for a confident lead.

“It was quite good considering this is our first competition after eight months,” Liu said. “We were a little nervous. Technically we have not changed that much in our program, but we felt we are more in control of the program and we know where to express more and where to adjust.”

Dancing to Swing and Foxtrot from “The Greatest Showman”, Chen/Sun impressed with intricate footwork, collecting a level four for the twizzles and a level three for the Pattern Dance and Partial Step Sequence. The ISU Four Continents Championships competitors picked up 76.57 points.

“We are satisfied with today’s performance.” Sun said. “I did a little mistake in the first element (the twizzles), but the rest was good.”

Ning/Wang put out an upbeat dance to “Mary Poppins” that featured a level-four stationary lift and twizzles. However, the Finnstep garnered only a level one and the midline step sequence was a level two. The couple earned 69.07 points.

“This is also our first competition after eight months and we are really excited. We have trained rally hard coming here,” Zhao told the post-event press conference.

Yuzhu Gao/Pengkun Zhao are not far behind in fourth place on 65.01 points. The young team of Yufei Lin/Zijian Gao follow in fifth (56.80 points).

Chen delivered a smooth performance to “Cinema Paradiso”, landing a slightly underrotated triple Lutz-triple toeloop combination, a triple flip and a double Axel. The National Champion collected a level four for her flying camel spin and a level three for the other two spins and the footwork. She earned 64.63 points.

“I am quite satisfied with my performance and I was able to do what I do in my regular practice,” Chen said. “I was a little nervous after not competing in a while and I think I need to get used to the lights and the atmosphere again. It was good that we had two test skates before in my team.”

Li, making her debut at this level, completed a triple Lutz-double toeloop combination, a double Axel and two level-four spins in her routine to “Beethoven’s Five Secrets”. However, she missed the triple flip. Li notched 49.94 points for her Short Program.

“Overall I am happy with my performance, but I made a mistake in my second jump and I need to work harder,” Li said. “I was nervous, especially before the competition. But as soon as my music started, I was able to focus and take one element at a time.”

Skating to “Bei mir bist du schoen”, Jin, another newcomer to the ISU Grand Prix, produced a triple Salchow-double toeloop combination and double Axel, but she fell on her triple toeloop. The 16-year-old achieved 47.75 points.

“I missed one jump and I was a little nervous,” Jin said. “This is a new short program and I have not practiced it that much. This is my first time at the Cup of China and I am happy to be able to perform at this bigger stage.”

Boyang Jin of China is poised for gold after a strong performance in the Men’s Short Program at the ISU Grand Prix Shiseido Cup of China in Chongqing (CHN) on Friday. Han Yan (CHN) sits in second, comfortably ahead of Yudong Chen (CHN).

Skating to “Trio in D” and “Mechanisms” by Kirill Richter, Jin nailed a quad Lutz right out of the gate and followed up with a quad toe-double toe combination and a triple Axel. The two-time ISU World bronze medalist picked up a level four for his spins and footwork to score 103.94 points.

“I did not have so much time to prepare for this competition and this is a new choreography,” he said. “I got the program and new skating boots at the end of September. Two weeks ago I performed this program for the first time at a test skate and today was only the second time.”

“I was able to do what I can do in practice and I did not do anything too difficult technically. It went smoothly,” Yan said. “I do not set too high goals for this competition. I just want to put out two good programs for the audience to enjoy.”

Newcomer Chen produced a triple flip-triple toe, triple Lutz and difficult spins and footwork in his routine set to “Canned Heat” by Jamiroquai. The only glitch came when he touched down on his triple Axel. The 16-year-old was awarded 75.74 points.

“I am not so pleased with my triple Axel that was not good,” Chen said. “I hope to skate better technically tomorrow (in the Free Skating).”

He Zhang (CHN) was shaky on his jumps, but came in fourth at 69.68 points. Zhiming Peng landed a quad Salchow-double toe but missed the quad toe attempt to finish fifth on 69.16 points.

Cheng Peng/Yang Jin (CHN) recovered from an early mishap to take a 12-point lead in the Pairs Short Program at the ISU Grand Prix Shiseido Cup of China in Chongqing on Friday. Yuchen Wang/Yihang Huang (CHN) are second, followed by the new team of Daizifei Zhu/Yuhang Liu (CHN).

Peng/Jin had a shaky start to their elegant routine to “Somewhere in Time” when Peng went down on the triple toeloop, but the team recovered instantly to produce a rock-solid throw triple loop, excellent triple twist and level-four lift, spin and footwork. The two-time ISU Four Continents medalists scored 75.62 points.

“This is the first time we competed in this new short program and overall we are satisfied with it,” Jin said. “We did it only two months ago and we still continue to make some changes.”

Peng added: “I am not so happy about my jump as I made a mistake. We have worked a lot on the jumps and this mistake has not happened in a long time. It came as a surprise to me.”
Wang/Huang completed a high triple twist, a throw triple Salchow and a level four step sequence in their program to “Go Now” by Adam Levine. However, Wang stepped out of the side by side triple toe. The ISU World Junior Championship competitors earned 63.56 points.

“We are competing at the Cup of China for the first time and we were able to show our level from training,” Huang said. “There were still some mistakes and we were a bit nervous.”

Zhu/Liu’s program to “Never Tear Us Apart” by Bishop Briggs included a throw triple loop and side by side double Axel. Making their debut in a major event, the team scored 54.37 points.
“It was quite OK for us. We also have a new choreography and made some changes in the step sequence,” Liu said.

Zhu added: “There is still room to grow. I am happy with how my partner did and he helped me to overcome my nervousness.”