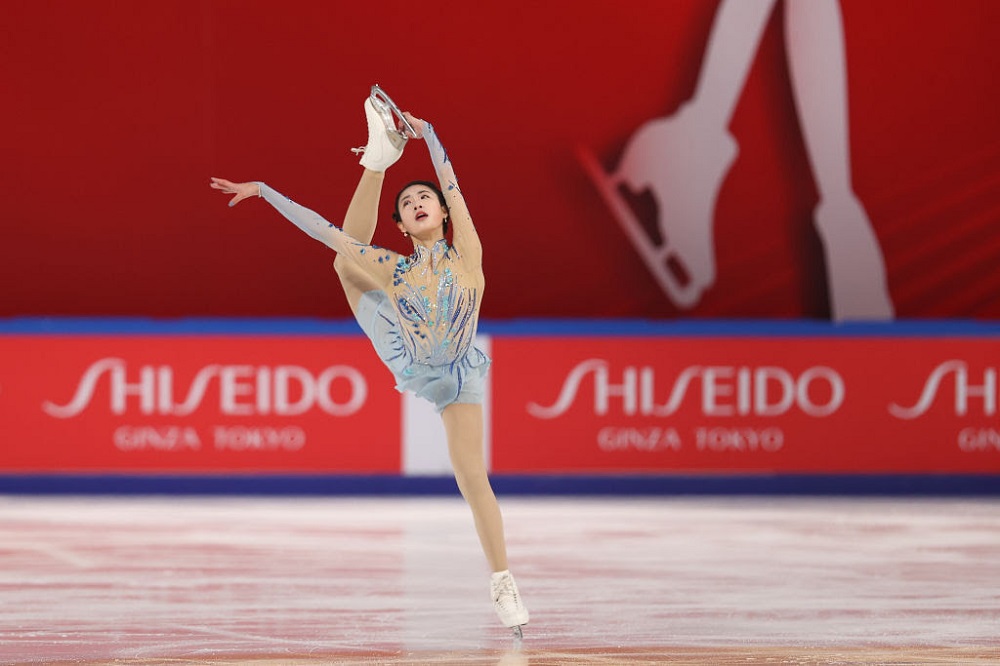 Following a decision of the ISU Council due to the ongoing Covid-19 pandemic and travel restrictions, the Grand Prix events are primarily domestically run events with domestic skaters and skaters who train in the host country or respective geographical region competing. At the Shiseido Cup of China, only Chinese athletes are competing.

Wang/Liu, Olympians at PyeongChang 2018, showed off their technical and artistic abilities in a dramatic program producing spectacular lifts and intricate footwork. The multiple National champions picked up a level four for the combination spin, the lifts and the twizzles while the one foot step sequence and the diagonal footwork were rated a level three. Wang/Liu got 122.61 points for their Free Dance and totalled 206.84 points to take the title.

“We are pretty happy with today’s performance,” Wang said. “Because of Liu Xinyu’s hand injury, we had a rushed preparation, but we did what we were able to do in practice. After he fully recovers, we hope to polish the program. Compared to last year’s Cup of China, I feel we have matured and have become more experienced.”

Chen/Sun’s delightful dance to “I Will Wait For You” from the “Umbrellas of Cherbourg” soundtrack featured smooth step sequences and beautiful lifts. The couple collected a level four for four elements and a level three for the diagonal step sequence to score 115.69 for the Free Dance. Overall the ISU Four Continents competitors accumulated 192.26 points.

“For today, we were able to perform like we do in training,” Sun said. “We used the same music (for the Free Dance like last year), but we made a new program via online classes with our overseas coaches. For the future, we hope to bring more emotions into the program.”

“It was good and we feel we have made progress compared to last year,” Wang said. “We hope to learn from this competition and we will focus on the levels in the elements that we did not get here to achieve them next time.”

Yuzhu Gao/Pengkun Zhao finished fourth with a smooth dance to “A Thousand Years” and the “W.E.” soundtrack, totalling 162.36 points. In their senior-level debut, Yufei Lin/Zijian Gao came fifth on 142.33 points.

Hongyi Chen (CHN) in a class of her own in Chongqing

Skating to the Chinese song “I Have the Strength to Fly”, Chen was in a class of her own. The ISU World competitor opened with a triple Lutz-Euler-triple Salchow combination followed by a triple toe-double toe, triple loop, triple Lutz and slightly two-footed triple flip-double toe. Her spins and footwork all merited a level four. The only error came when Chen popped an Axel. The 18-year-old earned 121.90 points for the Free Skating for a total score of 186.53 points.

“I am not completely satisfied. I regret that I did not go for the triple-triple in my second jumping pass and I missed one Axel. I felt a little tired,” Chen explained. “I want to improve my technical difficulty and my performance skills. Before coming here, I adjusted the programs, the elements, the steps to find what suits me best. My next competition will be in December, so there is still some time to improve.”

Li’s performance to “Song for the Little Sparrow” and “La terre vue du ciel” was highlighted by a triple Lutz-double toe, triple toe-double toe as well as another triple toe and level-four spins. She only missed a triple Lutz. The 15-year-old from Shanghai scored 98.39 points for the Free Skating which added up to 148.33 points.

“I regret that I fell on my second triple Lutz. When I get back home I will focus on my physical strength,” Li commented. “It was an unique opportunity for me to compete here and I tried my best. I learned a lot,” she added.

Jin landed a triple toe-double toe combination, a triple toe as well as two double Axels in her routine to “Fiamme” by Roberto Cacciapaglia, but she singled a Salchow. The 16-year-old was ranked fourth in the Free Skating with 87.68 points but overall solidly remained in third at 135.43 points.

“I also made a small mistake and popped a jump, but overall I performed up to my level,” Jin said. “In the future, I would like to bring the full package and also improve my skating skills.”
Siyang Zhang (CHN) came in fourth on 128.20 points while Lu Zheng (CHN) remained in fifth place with 86.48 points.

Performing to “The House of Rising Sun”, Jin – whose name means ‘gold’ in Chinese – reeled off a quad Lutz, quad toe-double toe, triple Axel-Euler-triple Salchow and another triple Axel. However, the two-time World bronze medalist touched down with his hand on the second quad toe and fell on the back end of a triple Lutz-triple toe combination. He scored 186.95 points and racked up 290.89 points overall.

“I am really pleased considering that I had only really prepared for two weeks and I had only one run-through of my program before,” Jin said. “There is still a lot to improve, jumps to add. I did like 70 percent of the program.”

“I showed the level I have at this point,” Yan said. “I aimed for a calm, steady performance. The people that love figure skating are very young and maybe don’t know that I can do quads. I want to prove myself in the future and do the quad Salchow and quad toe.”

Chen put out an enjoyable performance to “Micmacs a tire-larigot”, completing a triple Axel and seven more triples. He only stepped out of a double Axel. The 16-year-old newcomer received 150.47 points, making 226.21 overall.

“I am very happy with what I did here,” Chen said. “In the future I want to add more difficult jumps to my program. This was my first competition with the senior-level skaters and I have learned a lot.”

He Zhang (CHN) remained in fourth place with 209.74 points after a solid performance that included a triple Axel-triple toeloop combination. Zhiming Peng (CHN) landed a quad Salchow-double toeloop to finish fifth on 196.28 points.

Peng/Jin put out a confident and smooth performance of their romantic routine to “The Cloud Atlas”, completing a side-by-side triple Salchow, excellent triple twist, throw triple Salchow and loop as well as five level-four elements. The only glitch came when Peng doubled the toeloop.

The two-time ISU Four Continents medalists notched 148.28 points for a total of 223.90 points. It was the second victory for them on the ISU Grand Prix after winning Skate America a year ago.

“Today we skated better and more relaxed than yesterday in the short program,” Peng said. “Also, since we are skating this program for the second season, we feel more experienced with it. We have not changed it because of the pandemic but also because we felt we have not yet shown the full potential of this program.”

Jin added: “We are really happy to come here and to compete with our teammates. We are just focusing on executing and completing our elements. We will analyze this competition and learn from it.”

Skating to “The Lone Ranger” by Hans Zimmer, Wang/Huang produced a high triple twist, a triple toe-double toe combination and a level-four Axel Lasso lift and combination spin. However, Wang fell on the triple Salchow while he doubled and she also missed the throw triple loop.

“Overall we skated pretty well and showed what we can do in training,” Huang said. “Today we tried the throw triple loop for the first time (in competition). We had some mistakes and we want to make up for it next time.”

Zhu/Liu’s performance to “Mulan” by Jerry Goldsmith included a triple twist, throw triple Salchow and difficult lifts, but Zhu missed the solo jumps. The team scored 86.00 points in the Free Skating and had 140.37 points overall.

“This competition is a challenge for us,” Liu said. “Anything can happen in competition, including mistakes. We need to learn how to adjust mentally.”