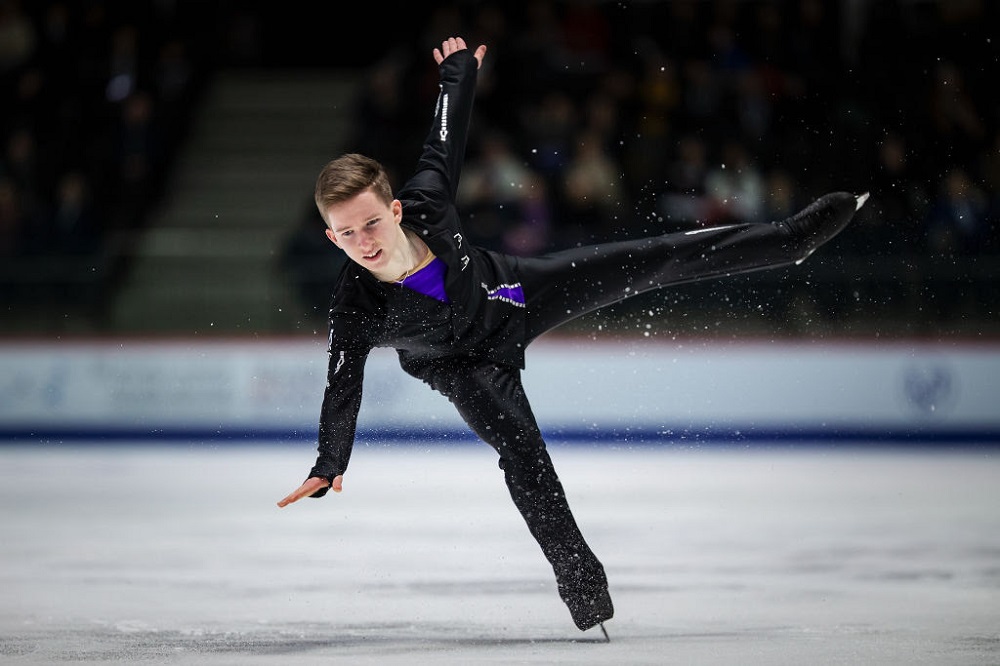 Valieva delivered an exquisite performance of her program “Girl on the Ball” inspired by Picasso’s painting, hitting a triple loop, double Axel, triple Lutz-triple toe and beautiful spins and steps that all merited a level four. The 13-year-old posted a new personal best of 74.92 points.

“I skated quite well, except for the combination, there was a little mistake,” Valieva said. “I was a bit nervous before the competition, but I tried not to be nervous once I took my starting position.”

“I did not expect to be in the top three in the short program,” she said. “It is important for me to get a high score for the senior level next season.”

Usacheva’s performance to “Please Don’t Make Me Love You” by Linda Eder was highlighted by a double Axel, triple loop and level-four spins and steps. However, she underrotated the back end of her triple flip-triple toeloop combination. The 13-year-old from Moscow scored 68.45 points.

“Today’s skating was bad,” the ISU Junior Grand Prix Final bronze medalist said. “I made a mistake on my triple flip-triple toeloop combination and I am not satisfied.”

ISU Junior Grand Prix Final silver medalist Alysa Liu (USA) remains within striking distance of the podium in fourth on 67.52 points. She hit a triple Axel in her combination, but underrotated the triple toe. Maiia Khromykh (RUS) is fifth with 66.78 and Seoyeong Wi (KOR) rounds off the top six with 65.45 points.

Russia’s Andrei Mozalev skated to a confident victory at the ISU World Junior Figure Skating Championships in Tallin, Estonia, on Friday, ending a series of silver medals. Yuma Kagiyama of Japan had to settle for silver and Russian Petr Gumennik soared from ninth to earn bronze.

Mozalev and Kagiyama were debuting at the World Junior Championships while Gumennik competed the year before.

Skating to “Lost in Blue”, “My Own Paradise” and “In This Shirt”, Mozalev hit a quad toe-triple toe, a solo quad toe as well as two triple Axels and four more triple jumps. The Youth Olympic Games silver medalist collected a level four for his three spins and set a new personal best of 160.78 points in the Free Skating.

“I approached the event like I always do, like in training, and I was calm,” Mozalev said. “The performance was not the best, there were mistakes on the triple Axel and the quads were not perfect.

“It has been a hard season, with many competitions. This season I was much better prepared than last season,” he said before adding that he plans to move up to the senior level.

Kagiyama produced a quad toe-double toe combination, a triple Axel-half loop-triple Salchow as well as four more triples in his routine set to the “Tucker” soundtrack. However, the Youth Olympic Games Champion fell on his opening quad toe and singled an Axel. The Four Continents bronze medalist ranked fifth in the Free Skating with 145.93 points and slipped to second on 231.75 points.

“In the six minutes warm-up I felt like my body and my mind were not connected,” Kagiyama said. “I was a bit nervous and that affected my performance and caused the mistakes.

“I was confident about my quad toe all season and when I missed the first one, I held back a little. But I was happy that I recomposed and landed the second quad toe and did the combination.”

Performing to “The Phantom of the Opera”, Gumennik reeled off a quad toe-double toe combination, a triple Axel as well as five more triple jumps and difficult spins and steps. He only underrotated the solo quad toe and a triple flip.

The skater from St. Petersburg was second in the Free Skating with 155.05 points, a personal best score, and pulled up to third at 231.12 points in total.

“I didn’t think about the podium and I am glad to skate almost clean,” the 2018 ISU Junior Grand Prix Final silver medalist said. “My training and my warm-up did not go so well, but in the performance I managed the jumps and I am pleased with how I fought through it.”