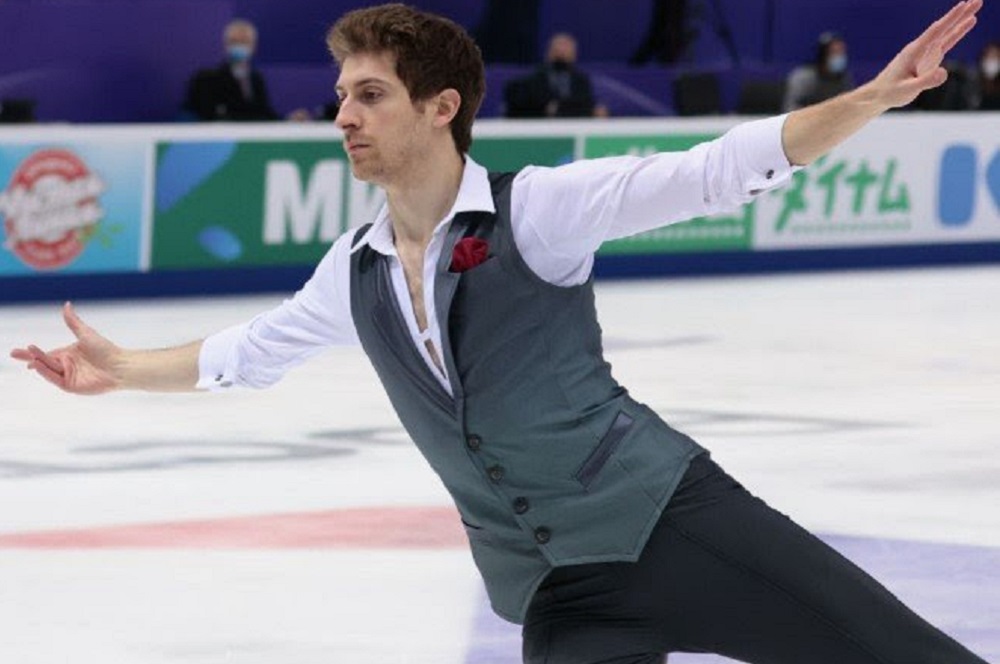 Morisi Kvitelashvili skated off with the gold medal, winning the first ISU Grand Prix title for Georgia. Russia’s Mikhail Kolyada pulled up from fourth to claim the silver while overnight leader Kazuki Tomono of Japan settled for the bronze.

Kvitelashvili opened his program to “Fly Me to the Moon” and “My Way” with a quad Salchow-double toe, a triple Axel, quad toe-triple toe and followed up with three more triples. The only major error came when he fell on a quad toeloop. The 2020 European bronze medalist ranked third in the Free Skating with 170.96 points, but moved up from second to first at 266.33 points overall to make figure skating history once again after becoming the first skater to win a ISU Grand Prix medal in 2018.

“Not everything worked in my program, but I tried hard, I fought and I am happy to be on the podium,” Kvitelashvili commented. “We are making history and we have other great skaters in our team. We’re going to have a complete team at the Olympic Games in Beijing, that’s also a first.”

Kolyada had a shaky start into his program to “Schindler’s List” when he fell on the quad Salchow and stumbled on the first quad toe. The 2018 World bronze medalist recovered to complete a quad toe-triple toe, two triple Axels as well as three more triples and level-four spins and footwork. Kolyada won the Free Skating segment with 180.16 points and moved up to second at 264.64 points overall, taking the second silver medal of the Grand Prix series this season and qualifying for the ISU Grand Prix of Figure Skating Final.

“I have mixed feelings. Some things worked out, some didn’t,” the Russian Champion noted. “I guess it (the Final) will be very interesting because I love Japan and I love skating there, the fans are amazing. The coaches and I have some new ideas for the next competitions that we will realize,” he added.

Tomono nailed a quad toe-triple toe, another quad toe as well as a triple Axel-Euler-triple Salchow combination in his program to “La La Land.” However, the Japanese skater missed one triple Axel and his quad Salchow was slightly underrotated (q).

The 2018 Rostelecom bronze medalist was fifth in the Free Skating with 168.38 points and slipped from first to third at 264.19 points.

“I am very happy about the medal, but being on the podium I am still disappointed. I am shocked being disappointed on the podium. I think it is because after the short program yesterday I had such a wonderful lead and I had a chance to be on the top of the podium,” Tomono said. “I was able to perform today with a cool head but the nerves kicked in because of the small mistakes I was making,” he went on.

Roman Sadovsky (CAN) turned in a strong performance as well, but slipped from third to fourth at 253.80 points. Matteo Rizzo (ITA) was ranked second in the Free Skating and moved up from ninth to fifth on 250.47 points. Evgeni Semenenko (RUS) finished sixth (246.66 points).

ISU World Champions Victoria Sinitsina/Nikita Katsalapov of Russia danced to gold in Sochi and right into the ISU Grand Prix of Figure Skating Final. Italy’s Charlene Guignard/Marco Fabbri earned the silver medal and assured their place in the Final as well. The bronze went to Laurence Fournier Beaudry/Nikolaj Sorensen of Canada.

Sinitsina/Katsalapov put out a beautiful performance to Rachmaninov’s Second Piano Concerto and the Variations on a Theme of Paganini. The 2020 European Champions collected a level four for the curve and rotational lift, the one foot step sequence, the twizzles and the combination spin. He only lost his balance at the exit of their stationary lift and two lifts received a deduction as they were too long. The 2019 World silver medalists scored 124.91 points and totaled 211.72 points for their second Grand Prix gold medal this season.

“We started the season and think we should continue the same way, improve with every competition. We made a small mistake today, we know what it was and we have time until the Grand Prix Final to polish it and fix it and got to the Final in a great mood,” Sinitsina said.

“The mistake is exactly that - a mistake. We did not expect it, I wanted to put Viktoria down from the lift as gently as possible and probably overdid it. That is easy to fix. The two deductions for the extended lifts are something to work on. I am not happy with our skate today but it's an experience and am not going to be upset about it,” Katsalapov explained.

Guignard/Fabbri turned in an excellent performance of their program to “Atonement”, that was highlighted by their lifts and smooth footwork. Four elements were rated a level four while two elements merited a level three. The multiple Italian Champions came very close to the Russians in the Free Dance with 124.15 points. Overall they accumulated 203.71 points.

“It was unexpectedly easy to skate today. We were feeling a bit tired in this competition, but skated easily today and we performed the best Free Dance of this season. It gives us a good feeling for the Grand Prix Final,” Fabbri told the press. “We are proud to be in the Grand Prix Final in the Olympic season because all the top teams competed this year in the Grand Prix,” he continued.

Fournier Beaudry/Soerensen’s dance to an interesting selection of music including “Call to Prayer”, “The Last Kingdom” and “Skogsraah” featured interesting lifts that were graded a level four. The couple as well earned a level four for the combination spin and her twizzles to score 115.01 points and 191.40 points total.

“We are very happy with our performance today. We had the first and the last Grand Prix, so we really tried to improve from one to the next and we are happy with the result. We had really a good time,” Soerensen shared. “The small mistake at the end ended up costing more than I wanted to – the choreo lift was too long.”

Sara Hurtado/Kirill Khaliavin (ESP) remained in fourth place with their dance to “Stairway to Heaven” (189.94 points). Kaitlin Hawayek/Jean-Luc Baker (USA) finished fifth with their performance set to a selection of music by Frederic Chopin on 187.62 points. Anastasia Skoptcova/Kirill Aleshin (RUS) were sixth at 180.93 points.

“The second Grand Prix was harder for us than the one in Japan, I can't explain why. The short program here did not work out, but we were able to pull ourselves together for the long program and it was much better,” Mishina shared. “After yesterday we were mad at ourselves and we were upset not because we were in second but because of the mistakes we made,” she continued.

Skating to “Black Swan”, Pavliuchenko/Khodykin shone as well, hitting a triple toe-triple toe-double toe combination (but the second triple toe got a 'q' for a slight underrotation), triple twist and triple throws as well as a rarely seen forward-outside death spiral. The only glitch came when she missed the side by side triple Salchow. 2019 ISU Grand Prix Finalists set a personal best score of 138.68 points and got 212.59 points overall.

“We are happy we were able to project our characters. Compared to the first Grand Prix in Canada we progressed as we could see with the reaction of the crowd. We'll keep working on it,” Khodykin said. “I feel very inspired by the movie “Black Swan” and want to bring across this a little crazy, not standard character,” added Pavliuchenko.

Kadyrova/Balchenko’s performance to “Prince of Persia” featured a triple toe and solid triple throws, but they lost their grip in the death spiral and she fell. The team from St Petersburg scored 124.19 points and remained in third place at 193.58 points.

“We made a lot of stilly mistakes in the program and am sure it will come with the experience, we'll keep working and polishing the programs. We’ll take it from there,” Kadyrova pointed out.

Kamila Valieva of Russia crushed the competition, winning with 40 points to spare. She led the Russian women to another podium sweep with Elizaveta Tuktamysheva taking the silver medal and Maiia Khromykh the bronze. All three medalists qualified for the ISU Grand Prix of Figure Skating Final.

Performing to Ravel’s “Bolero”, Valieva owned the ice the second she stepped on it and reeled off a quadruple Salchow, quad toe-triple toe, quad toe-Euler-double Salchow, triple Axel as well as four triples and difficult spins and footwork that all garnered a level four. The 2020 ISU World Junior Champion broke her own record score for the Free Skating with 185.29 points and total score with 272.71 points.

“I am very happy that I was able to skate almost well today. There was one little mistake when I did a double Salchow instead of a triple, so it was not yet my maximum,” the 15-year-old shared. “I am glad that I was able to go out calmly and to show what we have worked on. I really enjoyed skating today,” she continued.

Tuktamysheva landed a triple Axel-double toe, triple Lutz-triple toe as well as four more triples jumps in her routine to modern oriental music. The 2015 ISU World Champion only stepped out of her second triple Axel and scored 149.13 points. She was ranked third in the Free Skating but overall remained in second place at 229.23 points.

“I was a bit tired before my performance, I was fighting for all the jumps and I think the audience and the judges saw it, but I am still happy because the skate was not bad and after this tough week I am going to the Grand Prix Final. Now I just want to rest and sleep,” the 2021 ISU World silver medallist noted.

Khromykh’s performance to “Buenas Aires Hora Cero” and “El Tango de Roxanne” featured a quad toe-double toe combination and six triples and she only stumbled on her solo quad toe. The Grand Premio d’Italia silver medallist posted a personal best with 154.97 points and totalled 219.69 points to pull up from fifth to second.

“I am happy that I was able to fix the mistakes from Italy. The landing of the second quad toe was messy, but I am glad I was able to focus after the short program yesterday and was able to show almost my best in the long,” the Muscovite said.

Mariah Bell (USA) delivered an inspiring performance to “Hallelujah” with five clean triples but nevertheless slipped from third to fourth on 210.35 points. Premio d’Italia bronze medalist Loena Hendrickx (BEL) moved up from sixth to fifth with a solid outing on 203.69 points while Madeline Schizas (CAN) dropped from fourth to sixth at 192.14 points.