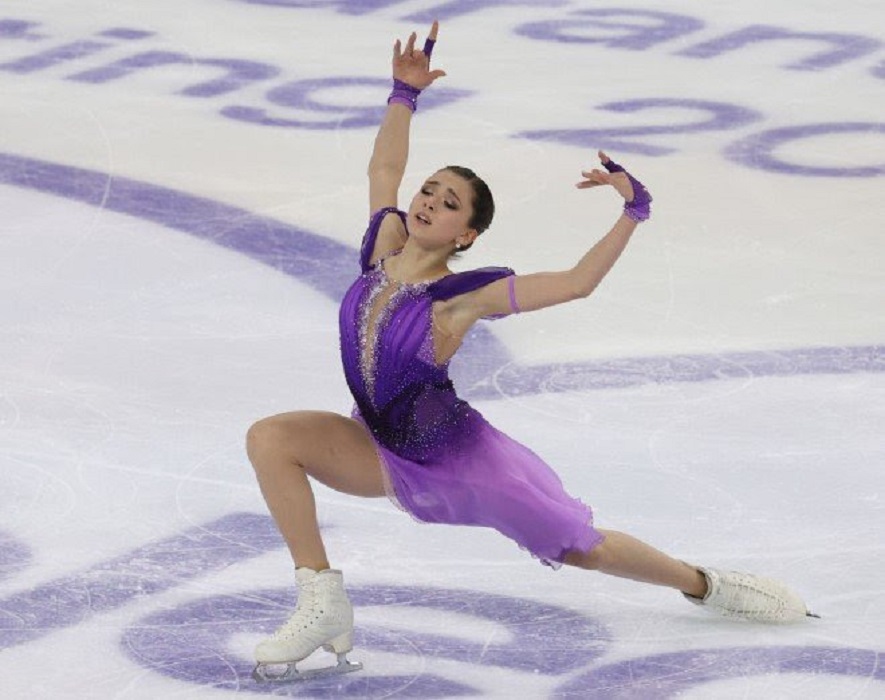 Skating to “Cinema Paradiso”, Tomono produced a quad toe-triple toe, quad Salchow and triple Axel as well as difficult spins and footwork to set a personal best score of 95.81 points.

“If I could do my best I knew I could get to 95 points. The jumps aside from the toe loop were not that great. I had small mistakes and was not moving as well as I had liked so I was happy I got my best socre,” Kazuki said.

“I know there’s room to improve to get to 100 points. I was nervous overall, steps and others were not my best but with the tension I was able to put on a good performance overall. A lot of practice paid off,” he continued.

“I was able to put out a decent performance today and it is good that everything worked out,” the 2020 Rostelecom silver medalist said.

“Tomorrow (for the Free Skating) I try to go out with the same kind of mindset and stick to my plan that we’ve worked out in practice.”

Sadovsky landed a quad Salchow and triple Lutz-triple toe to “Breath for Me“, but stepped of his triple Axel to score a season’s best of 84.59 points.

“Overall I am very pleased with how it went today. I had a little bit of a struggle this season internationally. It was nice to take whatever experience I had at Skate Canada and improve on them in this competition,” the Canadian Champion commented.

Sinitsina/Katsalapov put out a lively performance to “You Can Leave Your Hat On” and “Brickhouse”, completing intricate footwork and a rotational lift. The Midnight Blues, his twizzles and pattern dance step sequence garnered a level four while the lift and midline step were rated a level three. The 2021 World Champions achieved a season’s best of 86.81 points.

“We are pleased with our performance today, but it was not a 100 percent yet and there is a huge amount of things for us to work on,” Sinitsina told the post-event press conference.

“We are happy to have a season’s best. We went out with a positive mindset and the spectators were very welcoming and it was a great atmosphere at the rink,” she continued.

Guignard/Fabbri’s dance to songs by Michael Jackson was highlighted by a straight line lift and fluid steps. The 2019 European bronze medalists picked up a level four for the lift and her twizzles to earn 79.56 points.

“We have contrasting feelings about this performance,” Fabbri admitted. “Overall we felt we skated much better here than at Skate Canada and we improved the performance.

“Unfortunately we had some problems with the twizzles, that’s why we lost some points there and we are a little disappointed about this mistake.”

Fournier Beaudry/Soerensen delivered a smooth performance to a George Michael medley, collecting a level four for the stationary lift and the twizzles. The 2021 Skate America bronze medalists scored 76.39 points.

“It felt pretty good today, but it wasn’t perfect. We’re still trying to find our way through the short dance, navigating how to dance throughout. We definitely improved on the performance a lot in general and also on the technical side since Skate America,“ Soerensen noted.

Pavliuchenko/Khodykin put in an exciting performance to “Be Italian“ that featured very original entries and exits into the elements such as the triple twist. They hit a triple toe, throw triple loop and got a level four for the twist, lift and side by side spin. The 2016 World Junior Champions set a season’s best of 73.91 points.

“We are happy that our performance worked out well, we were able to enjoy it and have the emotions. Thanks all who supported us - the audience and the TV audience,” Khodykin noted. “We made the entries and exits of our elements much harder, but there are the only few true acrobatic tricks in the program,” he explained.

Mishina/Galliamov opened their entertaining performance to “Esmeralda” with a triple twist and throw triple flip, but then Mishina fell out of the triple Salchow which was downgraded as a result. The NHK Trophy Champions picked up a level four for all “level” elements and scored 73.64 points.

“Our performance today way was not good. I don’t want to justify anything, but perhaps it's because we were skating in front of a home crowd, which is always a bit harder. We wanted to do our absolute best and it didn't work,” Mishina commented.

“Our skate was good and we are happy to be in our first Grand Prix event. We want to thank the audience for their support, it really helps,” Balchenko said.

Valieva delivered an excellent performance to “In Memoriam” by Kirill Richter, reeling off a triple Axel with both arms raised above her head, a triple flip, triple Lutz-triple toe and level-four spins and footwork. The 2020 World Junior Champion set a new record score with 87.42 points for the Women’s Short Program.

“I almost did my maximum today. There is always a place for improvement, the combo was not so great,” 15-year-old Valieva said. “I enjoyed skating today, especially in the step sequence and I hope I was able to project the character I was trying to.”

“I am happy with my skate today, I enjoyed it. I think it's thanks to the support of the audience and the crowd cheered so much for all girls and we felt it. When the mood and the energy is so high you feel great skating and you don’t get tired by the end of the program,” the 2015 World Champion said. “I was a bit ill a week ago and my preparation was affected, so am happy with the skate,” she added.

Bell’s program to “River Flows In You” included a triple flip-double toe combination, triple Lutz and double Axel. The American netted a season’s best of 69.37 points.

“I was in France last week and obviously I didn’t have a great short program there. And here, not doing the planned triple-triple, so still leaving points out. I was able to get the points on the levels and spins that I missed in France,” Bell commented. “This program is really enjoyable for me, but I haven't really competed yet this year except for last week so it feels very new to me, but I really enjoyed it and I am pleased with today went and I’m looking forward to tomorrow.”