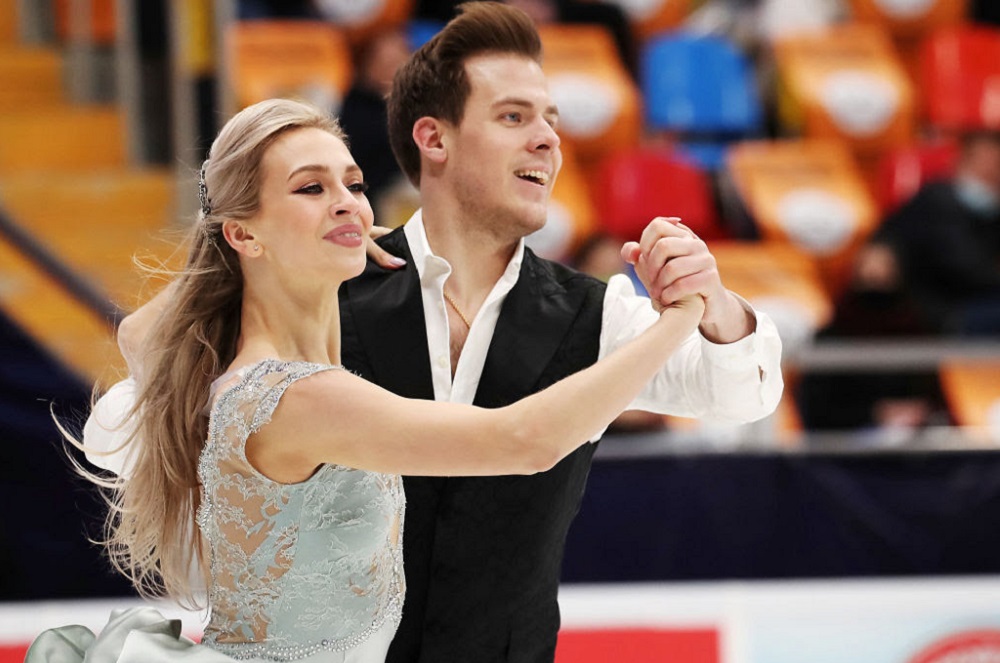 Following a decision of the ISU Council due to the ongoing Covid-19 pandemic and travel restrictions, the Grand Prix events are primarily domestically run events with domestic skaters and skaters who train in the host country or respective geographical region competing. Overall, 57 skaters/couples that represent nine ISU members compete at Rostelecom Cup.

Skating to “Amsterdam” by Jacques Brel, Kvitelashvili hit a quadruple Salchow-triple toeloop, a triple Axel and quadruple toeloop. The 2020 ISU European bronze medalist earned a level four for two spins and a level three for the change sit spin and the step sequence for a score of 99.56 points.

“It has been a long preparation and I am pleased that I finally was able to compete and to present myself,” Kvitelashvili said. “I am happy it worked out. The story behind my program is that I am a seaman who is on shore after a long trip and has fun, and all this happens in Amsterdam.”

“I am pleased that I skated clean and got many points,” the 18-year-old said. “We originally planned to skate with two quads, Lutz and Salchow, but just before the warm-up on the floor my coach Veronika Daineko told me we’re not going to do that. I felt relief and less nervous, because it has already become easy for me to skate the program with one quad.”

Kolyada almost fell on his opening quad toeloop that was slightly underrotated, but recovered to nail a triple Axel, triple Lutz-triple toeloop and excellent spins and footwork in his upbeat program to “Let’s Get Loud” by The Baseballs. The two-time European bronze medalist picked up 93.34 points.

“Everything worked out today except for the quad toe. I enjoyed the atmosphere here and we’ll continue to work,” the 2018 World bronze medalist said.

Makar Ignatov (RUS) is not far behind in fourth place on 91.82 points. He landed a rare quad loop. Reigning ISU European Champion Dmitri Aliev (RUS) underrotated his triple Axel to place fifth at 89.62 points. Current ISU World Junior Champion Andrei Mozalev (RUS) impressed with a quad flip, but stepped out of an underrotated quad toe and had no combination to finish sixth (86.01 points).

Sinitsina/Katsalapov turned in a superlative performance as they kept to their successful Rhythm Dance to “Singin’ in the Rain”. The 2019 World silver medalists collected a level four for all elements – the twizzles, the Finnstep Pattern Dance, the two step sequences and their rotational lift to notch 91.13 points.

“It felt great,” Katsalapov said. “We love competing and we missed it. We had some health problems and we did not skate for a long time and we were not able to finish the free dance in our last competition.”

Sinitsina added: “When we heard that we keep the Rhythm Dance, I was at first a bit sad, because I do not like to skate a program for such a long time. But I realized that we do not tire of the music and love the program so that we still enjoy to skate it and hopefully the audience does as well.”

Zagorski/Guerreiro put out a dynamic performance of their dance to “The Greatest Showman“, earning a level four for the twizzles, Finnstep, the Pattern Dance Step Sequence and their lift. The 2018 Olympians scored 84.46 points.

“I think we really enjoyed our performance,” Guerreiro told the post-event press conference. “After taking part in the test skates and the Sochi (Russian Cup) events we felt quite confident. Obviously, as the season is progressing it has its challenges between people sometimes being sick and the whole pandemic. Our main goal was to do exactly the same thing (as in Sochi) but to be more present.”

Zagorski said: “We wanted to improve on what we’ve already done and correct the small mistakes and show what we can do in practice in the competition. Today we felt pretty confident we did a good job.”

Performing to Blues, Foxtrot and Quickstep from “Bonnie and Clyde”, Skoptcova/Aleshin produced four level-four elements as well and earned 79.75 points.

“After Kazan (fourth stage of the national Russian Cup series) we did not have much time, but we nevertheless fixed some technical things and we are happy that we did everything today,” Skoptcova said.

Annabelle Morozov/Andrei Bagin (RUS) ranked fourth with their fun interpretation of “Chicago” on 76.21 points. The new team of Elizaveta Khudaiberdieva/Egor Bazin (RUS) is just behind them in fifth place on 76.10 points, followed by Alexandra Nazarova/Maxim Nikitin (UKR) on 74.86 points.

Mishina/Galliamov delivered a confident performance of their entertaining program to “Esmeralda”, completing a triple twist, high throw triple Lutz and original lift. The twist, death spiral, spin, footwork and lift all merited a level four. The only glitch came when Mishina stepped out of the landing of the side by side triple Salchow. The 2019 ISU Grand Prix Final bronze medalists scored 79.34 points.

“We made some mistakes that should not happen),” Mishina said. “Maybe we were not completely recovered from Kazan (the competition a week ago).”

Galliamov added: “We are very happy for the fans that came here to support us and wanted to give them something to enjoy. We skated for them,”

Boikova/Kozlovskii looked very strong in their lyrical performance to “The Star of Captivating Happiness” that featured a perfect side by side triple Salchow and a big triple twist. The pair from St. Petersburg collected a level four for five elements as well. However, Boikova stumbled on the throw triple flip. The Russian Champions netted 78.29 points.

“It was a nice feeling to compete with the top teams from our country,” Kozlovskii said. “We liked our performance and, while maybe not everything was perfect, we feel that the interpretation and presentation was at a very high level.”

Skating to “Joker” and “Birds of Prey”, Panfilova/Rylov impressed especially with their triple twist, throw triple flip and lift. They completed a side by side double Axel and the lifts and the death spiral garnered a level four. The reigning World Junior Champions earned 73.84 points.

“We are quite pleased with today’s performance as it was our first time out this season,” Panfilova said. “We missed a lot of practice and competitions. We had some problems with the levels of some elements, but this is something that we can fix.”

Performing to “No Time to Die” and “You Should See Me In a Crown” by Billie Eilish, Kostornaia produced a double Axel, triple Lutz, triple flip-triple toeloop combination as well as three level-four spins. The ISU Grand Prix Final Champion scored 78.84 points.

“There is something to compare (to my previous competition), this was better and I am very happy about that,” said the 17-year-old. “I did not change anything in my training process after Kazan (Russian Cup event a week ago) and I had a rest, then I realized that I need to work on harder.” She hopes to bring back the triple Axel for the Russian National Championships, she added.

Tuktamysheva opened her program to “Spartacus” with a beautiful triple Axel but then stumbled on a triple flip. The 2015 ISU European and World Champion recovered to land a triple Lutz-double toeloop and collected a level four for her spins. The 23-year-old picked up 74.70 points.

“The mistake was unexpected, because the combination (Flip-toeloop) has been working well,” Tuktamysheva said. “But something was off in the warm-up and I started to think about the technique too much. It is better to switch off your mind and trust your body.

“Overall I am pleased with the performance. It was one of the best short programs this season so far if you don’t count the mistake on the flip.”

Trusova went for a triple Axel as well, but she fell and the jump was downgraded. The 2020 ISU European bronze medalist rallied to land a triple flip, triple Lutz-triple toe and her spins were rated a level four. The ISU Grand Prix Final bronze medalist earned 70.81 points.

“This is the third competition I couldn’t do the (triple) Axel,” the 16-year-old said. “I will work harder and will try to do it clean. We are skating the program a lot in practice and I am always trying to forget about a mistake and do the rest clean.”

Anastasiia Guliakova (RUS) is just off the podium in fourth after a clean performance with 70.07 points ahead of Elizaveta Nugumanova (RUS) on 68.47 points. The 2019 European Champion Sofia Samodurova (RUS) completes the top six (68.01 points).