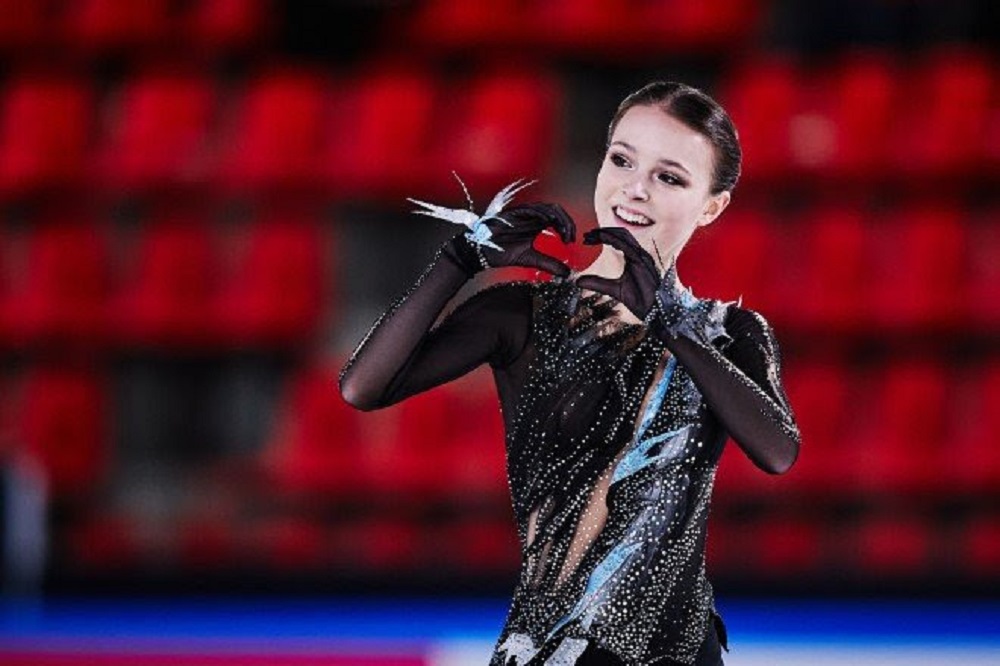 Shcherbakova changed her Short Program following the Grand Prix in Turin and now is skating to “Dangerous Affairs” and “Total View” by Inon Zur. The 2021 World Champion completed a double Axel, triple flip and triple Lutz-triple toe, as well as level-four spins and footwork to score 77.94 points.

“Today I was nervous, because I skated my new short program for the first time in competition, so I was really nervous not for the jumps, but for the program and I did not want to make a mistake,” the 2020 European silver medalist said. “My coaches decided to change the program. They said the new program will be better for me and that I did not look the way they wanted me to look in the previous program.”

“I am happy with what I did today,” the 2020 European Champion noted. “My coaches told me to do a double Axel (instead of a triple), because I need to skate clean and I did all that I can do.”

“I am basically pleased with my performance. I did what I can do and what I have trained,” the 17-year-old said. “We have worked a lot on the program. Vera Arutiunian choreographed it and we have done video calls to polish everything, the hand and upper body movements,” she added.

Starr Andrews (USA) has withdrawn during the Women’s Short Program due to medical reasons.

Papadakis/Cizeron put out a characteristic and crisp performance of their dance to “Made to Love” and “U Move, I Move” by John Legend. The 2018 Olympic silver medalists collected a level four for the twizzles and the curve lift, while the Midnight Blues Pattern Dance and the step sequences were rated a level three. The multiple French Champion set a season’s best with 89.08 points.

“It was nice to be in Grenoble at the Grand Prix and with our French audience and to feel their support. We did a very good performance, we are happy with what we did, we are happy with the scores and look forward for tomorrow,” Papadakis said.

Bringing the “waacking” street-style dance on to the ice, was a challenge, Cizeron shared. “The first few weeks we were training off the ice and it takes quite some coordination, and we did research on the ice on how we can fit the steps, the flow. It was try and error. It was important to us to embrace the style and not just try to copy or make it look like a waacking style,” he said.

Dressed in bright orange, Gilles/Poirier entertained the crowd with their dance to “I Guess That’s Why They Call It the Blues” and “Still Standing” by Elton John. The twizzles and rotational lift merited a level four while the Midnight Blues Pattern Dance was a level three. The 2021 World bronze medalists scored 81.35 points.

“It's nice to be back here,” Poirier said. “When we were here last time we had a disappointing finish and did not qualify for the (Grand Prix) Final. So we are definitely on a mission this week.

“This is our second event with an audience and it's great to be able to skate and entertain the crowd.”

Stepanova/Bukin’s upbeat performance to a Backstreet Boys remix was highlighted by a straight line lift and fast twizzles. However, the midline step sequence and the Midnight Blues garnered a level one only. The multiple European medalists earned 79.89 points.

“Today I think we skated better than in our first Grand Prix in Italy, our first competition,” Stepanova said at the post-event press conference. “For now we don't know where we lost two points compared to Italy, but as of right now we are satisfied with our performance.”

Christina Carreira/Anthony Ponomarenko (USA) are sitting in fourth place at 70.74 points with Evgeniia Lopareva/Geoffry Brissaud (FRA) not far behind in fifth on 69.23 points. Annabelle Morozov/Andrei Bagin (RUS) round up the top six (68.45 points).

Skating to “When You’re Smiling” by Michael Bublé, Kagiyama hit a quad Salchow-triple toeloop, a quad toeloop and a somewhat shaky triple Axel and had all reason to smile when his score of 100.64 came up, a season’s best and almost equaling his personal best.

“My short program hasn’t been going so well in my previous competitions,” said Kagiyama. “Coming in, I was wondering if there will be another disappointment, but after my practice and six-minute warm-up I gained confidence that I might do well today.

“There are some things I regret, but even with mistakes I got a 100 points and I think that shows my growth.”

“I am excited to be back in Grenoble and even if we are in the ‘bubble’, it is exciting to skate for an audience,” Vasiljevs said. “Developing a character in skating is like a bottle of wine – it needs time to get that taste,” he added.

Jason Brown (USA) produced a triple flip, triple Lutz-triple toe and excellent spins in his program to “Sinnerman”. However, he touched down with his hand on the triple Axel. The 2020 ISU Four Continents silver medalist picked up 89.39 points.

“There were things I loved about this program, I loved the fight,” said Brown. “There were a few little errors in the program that I am not so pleased with, but tomorrow is another day,” Brown noted.

Boikova/Kozlovskii turned in an intense performance to “Swan Lake”, hitting a side by side triple Salchow, triple twist, throw triple flip and earning a level four for the twist, side by side spin, lift and footwork. The pair netted 77.17 points, a season’s best.

“There was not so much time in between our competitions, but we put in some good work and the program went well today,” Kozlovskii said. “We are able to bring across the character of the Black Swan better with each competition and we are glad the judges appreciated it,” he added.

Artemeva/Nazarychev’s performance to “The Artist” included a triple twist, throw triple Lutz and side by side triple toeloop. The Grand Premio d’Italia bronze medalists set a personal best with 73.02 points.

“We went out there and did what we can do. After finishing third in Italy we knew we have a chance to qualify for the Grand Prix Final, which would be great in our first senior season,” said Nazarychev. “After Italy we went back home and worked on the mistakes we needed to fix. Coming to France, we were confident that we can show our maximum.”

James/Radford put out a personal best performance as well, completing a triple twist, throw triple Salchow, side by side triple Salchow in their routine to “Shiny Happy People” for a score of 71.84 points.

“We are proud of our performance today. It’s still not what we can do, in the practices it's a bit more consistent and stronger. It's easy and fluid in practice, but the competition is a different story for a new team,” said James.

“We've been struggling with the short program for a couple of competitions and this will give us a lot of confidence moving forward,” said Radford. “For me, personally, it was really a lovely moment to be back on the ice with Vanessa and feel the program and the music.”