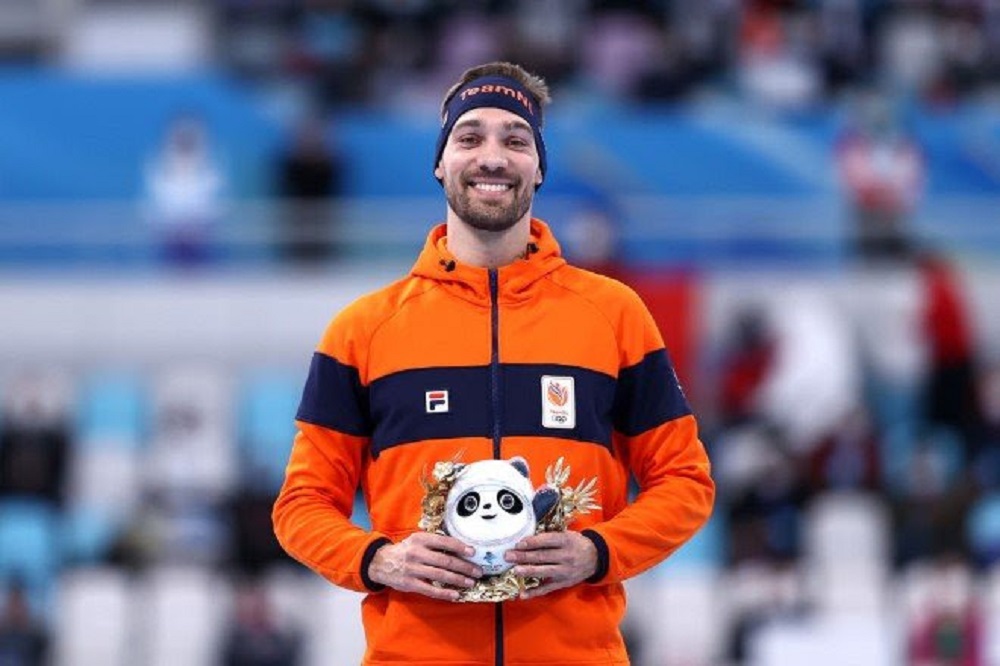 Krol took the ice in the second pair after the ice-cleaning break and smashed the leading time of 1 minute and 45.32 seconds by Sergey Trofimov (RUS) by 1.77s to break the 20-year-old Olympic record set by Derek Parra (USA) in Salt Lake City by 0.40s. Krol’s pairmate Peder Kongshaug (NOR) followed suit at a distance to finish in 1:44.39s, which would eventually get him in fourth place.

Nuis was up in the next pair against Kim Min-Seok (KOR). “I saw him finish and thought, boy this is going to hurt,” Nuis said. That was a superb time. He was so much faster than all the others. I knew I had to be really, really good. But I beat him in the last two races (European Championships and Dutch Trials) so, I knew I stood a chance.”

The defending Champion drew his confidence not just from winning his last two 1500m races, but also from teammate Wüst, with whom he shares an apartment. “I wouldn’t say I couldn’t have done it without her, but it surely helped the world. She has so much experience, and like me, winning was not self-evident for her over the past years. To see how she nailed it yesterday…” When Wüst got back to the apartment after winning her sixth Olympic title she told Nuis just to relax. He explained what she had told him: “You are skating so well on this ice. Just put two arms on your back, do what you have to do and you’re the best.” And that is exactly what Nuis did. “I just did it the way she did it, just copied her”, Nuis added.

When Nuis crossed the finish line, Krol was still recovering from his gruesome effort. “For about three minutes, I thought it was enough (for the gold medal),” Krol said. “I skated my best 1500m this season and I’m very happy with that, but I knew the pair after me was a big one. Kjeld (Nuis) just has a super day, which is unfortunate for me. There was just one guy better than me today. I have to respect that and be content with the silver.”

Krol had a slightly different approach to the 1500m than his rival. “I had to make the difference in the first part, so it’s give it your all and die in the final lap.” Nuis explained: “Krol opens 23.1 (versus 23.42 for Nuis) and I just held back a little, relied on my technique at a low (energy) cost, and then after a lap-and-a-half, it’s full gas. That’s the weapon I used in my latest races and that’s how I win the 1500m.”

After Nuis had won, Kim Min-Seok was one of the first to congratulate him. “He was genuinely happy for me, I really appreciate that. Someone from another country, we don’t speak each other’s language, and he comes up to me like that. That’s great. He was on the podium with me and Patrick (Roest, NED) four years ago, and he was happy again.” Kim took the first medal for Korea at the Beijing 2022 Olympic Winter Games, but he had hoped for another color. “I believe I did my best today and am very happy with my performance. I got bronze only because there are better athletes out there (…). I wished to surpass the Netherlands athletes someday, and that will be my driving force for the future.”


Mantia and Ning bit the dust

After Krol, Nuis and Kim had set their marks, World Cup leader Joey Mantia (USA) bit the dust in 1:45.26s to come in sixth. "Pretty sh*t,” he reacted. “I haven't really felt surefooted on my skates in a while. I didn't feel comfortable in the race. (But), even if I'd had a perfect race, I don't know if I would have gone as fast as Kjeld did. It's nice to see the winner did an exceptional time. I don't think I got anything snatched from me, but I wish I had skated better."

Home favorite Ning Zhongyan (CHN), who ranked second in this season’s World Cup, even conceded 2.07s to finish in seventh place. He felt the pressure of skating in front of a home crowd, but the experience might help him when he’ll start in his remaining two events: “I am kind of disappointed because I didn't skate at my normal level. I think the reason is that I failed to get my mentality right. Because this is my first time skating in an Olympic Games and on my home rink. I had a lot of pressure (…) and I have to adjust my mentality for a better performance in the Men's 1000m and Men's Mass Start. I am not convinced by my result today.”

Casey Dawson (USA) finished second from bottom, but was happy to be in Beijing at all, after flying in late due to a positive Covid-test in January. He explained what had happened: “I first tested for Covid three weeks ago. I’ve literally taken 45 PCR tests over the past three weeks. I had to test negative to finally get here. Originally they said two PCR tests had to be negative and then they switched that to four PCR tests. That’s why I missed my 5000m race and got here today. I touched down here in Beijing at 06:50am (Tuesday) after travelling for 20 plus hours on the plane. I was able to get some sleep on a couple of flights. It was definitely hard, I was stressed out getting here.”

And the stress was far from over once he had arrived. Dawson’s luggage went missing and he did not have his own blades. "I had to use an extra set of blades from Haralds Silovs (LAT). He lent me those and I’m super grateful. My coach knows his coach pretty well and we could set something up.”