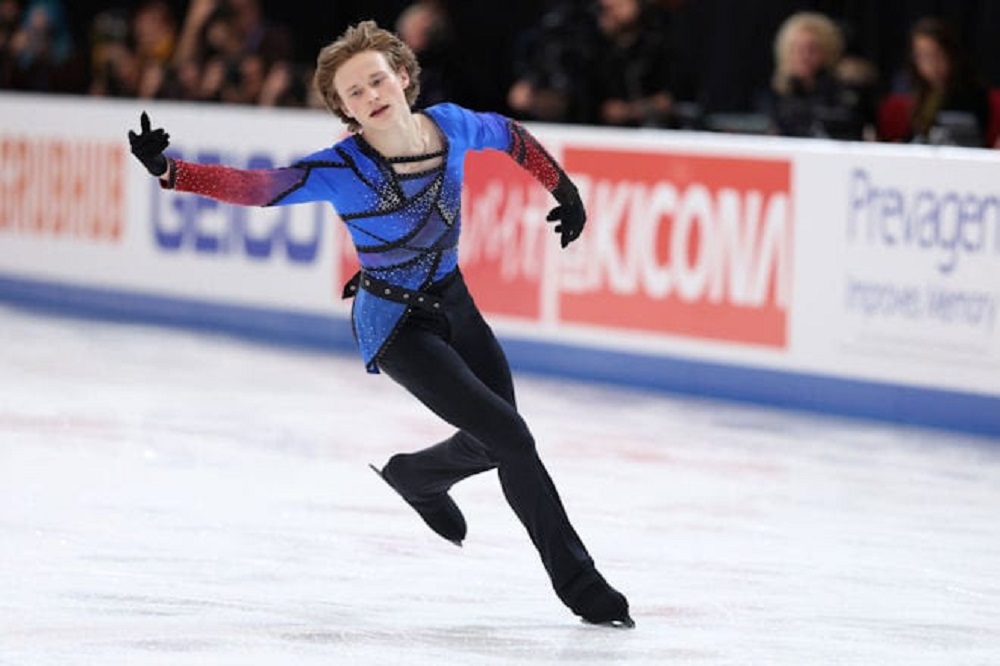 Chock/Bates had picked a remix of “Let’s Dance” by David Bowie and impressed with their fast twizzles, footwork and overall interpretation. The 2022 ISU World bronze medalists collected a level three and four for the twizzles and a level three for the pattern dance step sequence and midline step sequence, while the rotational lift was graded a level two. The two-time ISU Four Continents Champions scored 82.63 points.

“We really liked the Rhythm Dance that we created this summer. We feel it has got loads of potential,” Bates said.

“This is our first outing and we had a few technical issues, especially in the lift. But it was still a good start and it’s wonderful to be here at Skate America,” he continued.

“It was such a fun crowd today,” Hawayek observed.

“It’s really special to be in front of American crowd and we definitely felt the support from everybody else: there were some Japanese fans in the crowd as well. It’s great to see people being able to come and visit competitions again.”

“We were very happy with our performance today and our preparation from our last competition. We did what we do in practice and we enjoyed skating in Boston,” Le Gac commented.

Sakamoto put out an entertaining program to “Rock U” and “Feedback” by Janet Jackson that featured a triple Lutz, double Axel and level-four spins and footwork. However, she reduced her combination to triple flip-double toe loop. The Olympic bronze medalist scored 71.72 points, less than half a point ahead of Levito.

“I think I saw mistakes on every element I could make a mistake on,” Sakamoto admitted.

“If I don’t make any mistakes in training I can do my best in competition no matter how nervous or tense I am,” she explained.

Levito nailed a triple flip, double Axel and triple Lutz-triple loop, but she under-rotated the second jump in the combination. The 15-year-old set a personal best score for herself with 71.30 points.

“It was a fun home crowd I felt like the energy from the audience gave me energy and I enjoyed that,” the World Junior Champion shared.

“I feel very happy with my performance even though it was not perfect. I did feel pretty free, I really let go, I performed I did the best that I could.”

Skating to “Hit the Road Jack”, Glenn completed a triple flip-triple toe, double Axel and triple loop to earn 68.42 points and break her personal best from 2019.

“I felt good out there. It was a great crowd. Skating in your home country is always a great experience,” Glenn commented.

“I feel I overcame some adversity and anxiety I was having with the short program this season and I’m looking forward to tomorrow.”

World Champions Alexa Knierim/Brandon Frazier (USA) added the 2022 Skate America gold medal to their resumé. Canada’s Deanna Stellato-Dudek/Maxime Deschamps skated off with the silver medal while their teammates Kelly Ann Laurin/Loucas Ethier moved up one spot to claim the bronze.

Performing to “Sign of the Times” by Harry Styles, Knierim/Frazier produced a triple twist, triple toe-double toe combination and level four lifts. However, Knierim went down on the throw triple loop.

The US Champions earned 126.20 points for their Free Skating for 201.39 points overall, enough to win their second Skate America title - when they won their first in 2020, the event was restricted to skaters based in the US alone.

“It was our first competition of the season. Tonight was a fight, a lot of grit out there tonight. I’m very proud of Alexa and I trusting each other to get through that program,” Frazier said.

“It’s a starting base for us and I can see this program growing throughout the season. I’m excited to get home and back to work.

“We lost a lot of points out there, so we are disappointed about that.”

“Maybe we’re not disappointed in the program,” Knierim clarified.

“We knew coming in that we are not in the shape that we needed to be our best. That’s OK. That is part of our journey and the process.”

Stellato-Dudek/Deschamps opened their “Cleopatra” program with a triple twist and followed up with a triple toe-double toe, throw triple flip and loop. The 2022 Nebelhorn Trophy Champions slightly surpassed their previous personal best with 124.84 points and totaled 197.89 points to win silver in what was their first ISU Grand Prix event as a team.

“We are very happy with our first Grand Prix. Our goal is to go to every event and score a little bit higher than we did in our previous one and improve the levels,” Stellato-Dudek commented.

“We scored a little bit higher than a couple of weeks ago at Nebelhorn, but we haven’t seen our levels yet.”

“We are really pleased with how it went today,” Deschamps noted.

“It wasn’t the easiest free program today, but we fight together, stay together throughout the program.”

Laurin/Ethier were first-timers on the ISU Grand Prix as well. The young Canadians landed a triple twist, a side-by-side triple loop and throw triple loop in their routine to “Carnival Row” and “In the End” to score 104.35 points, a personal best. Overall they accumulated 156.94 points.

“This being our first Grand Prix event, being in last warm up group after short program was a big deal for us, we didn’t expect that,” Ethier said.

“The energy was great and skating along these guys gave us energy.

“It was the best we could do today and we’re very happy with that.”

Letizia Roscher/Luis Schuster (GER), who had stood in third place following the Short Program, fell on a lift and dropped to seventh (135.88 points).

Knierim/Frazier got 15 points and will compete again in Sheffield (GBR) while Stellato/Deschamps have 13 points and are scheduled to skate again at the Grand Prix in France. Laurin/Ethier (11 points) have their next event next week at home at Skate Canada.

Skating to “Euphoria” by Labrinth, Malinin opened his performance with a spectacular quadruple Axel and reeled off a quad toe, quad Lutz, quad Salchow and a triple Lutz-triple Axel combination. The only error came when he under-rotated both jumps in his quad Lutz-Euler triple Salchow combination and fell.

The 2022 ISU World Junior Champion posted a personal best of 194.29 points and racked up 280.37 points overall to move up from fourth place after the Short Program to first after the Free Skate.

Malinin was competing in his first ‘real’ ISU Grand Prix event as the 2020 edition was held as a domestic competition because of the COVID-19 pandemic.

“I felt great, it was a really good skate. I’m still in shock,” Malinin said.

“I just know that I trusted my practice and it worked well. It was very important to forget what I did yesterday (in the Short Program) and just focus on the long. I was really well prepared going into the long. That gave me the confidence to try the quad Axel and I was able to pull it off. I was very happy with how I landed it. I just have to keep that same confidence with every competition I do.”

Top of the leaderboard overnight, Miura missed his opening quad loop, but recovered to land a quad toe-triple toe, a quad Salchow and another quad toe as well as a triple Axel-double Axel sequence. He also stepped out of another triple Axel. The 2022 ISU Four Continents bronze medalist picked up a personal best of 178.23 points and slipped from first to second at 273.19 points.

“I was in top form coming in so I was able to do very well here. I know there were some mistakes and that will give me something to work on for my next competition,” the Japanese skater told the press.

“My next competition is [next weekend’s] Skate Canada and it is the first time for me to do two overseas Grand Prix. I learned a lot here and hope to use it at Skate Canada.”

“It was not perfect and it was not what I wanted, but tried hard and I’m quite satisfied,” the Korean Champion noted.

“I can work on my mistakes for next Grand Prix [the NHK Trophy in Sapporo (JPN)]. I learned a lot of things yesterday and today and I want to work a lot more on my jumps and spins and to have more energy in my program.”