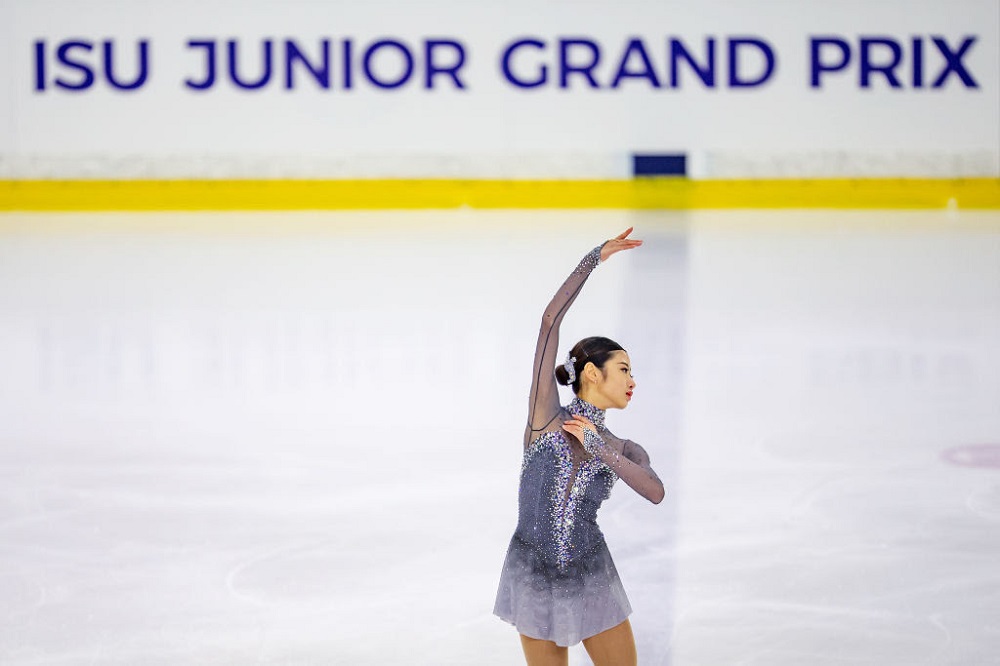 Lee skated a clean Short Program and stood in third place, trailing the leader Usacheva by a little over two points. The 14-year-old then delivered an excellent Free Skating to “Riverdance – Firedance”, landing seven triple jumps including a triple Lutz-triple toeloop combination to pull up to first place on 197.63 points. Overnight leader Usacheva completed five clean triples in her routine to “Je suis malade” performed by Lara Fabian, but she fell on an underrotated triple Salchow and also two-footed an underrotated triple toeloop (194.40 points). Matsuike, who ranked fourth in the Short Program, turned in the second-best Free Skating of the night to grab the bronze medal at 193.03 points. Usacheva and Matsuike debuted on the ISU Junior Grand Prix while Lee had a bronze from one event last year.

“I was very nervous about this competition but I’m very happy to finish well,” Lee said.

Mozalev (RUS) back on top of the podium
Andrei Mozalev (RUS) grabbed a narrow lead over Sihyeong Lee (KOR) in the Short Program where both men delivered a strong skate. The Russian then produced a quad toe-triple toe, a shaky quad toe as well as three clean triples in his program to “Step Up”. However, he struggled with the triple Axel. Nevertheless, the skater from St. Petersburg took his second ISU Junior Grand Prix gold medal of his career with 223.72 points. The 16-year-old had won in Ostrava in 2018. Skating to “Love Never Dies”, silver medalist Lee landed six clean triples. He did not attempt a quadruple jump (218.31 points). The Korean has been competing on the ISU Junior Grand Prix since 2015, and this is his first medal. Daniil Samsonov (RUS) stood in fourth place following the Short Program as he made errors on two jumps. He hit six triple jumps in the Free Skating, but fell on an underrotated quad Lutz. The Muscovite moved up one spot at 211.62 points to get the bronze in his ISU Junior Grand Prix debut.

“I am pleased with the result, but my performance could have been better,“ Mozalev commented. „This second victory on the Junior Grand Prix means that we‘re working in the right direction and get closer to the main goal. For my next Junior Grand Prix, I want to improve the quality of my elements and get them consistent in the programs,“ he continued.

Elizaveta Khudaiberdieva/Andrey Filatov (RUS) have teamed up only this spring, but celebrated instant success in their ISU Junior Grand Prix debut, edging Maria Kazakova/Georgy Reviya (GEO) for the gold. ISU World Junior Figure Skating silver medalist Khudaiberdieva and her new partner danced to the lead in the Rhythm Dance, collecting a level four for one pattern of the Tea Time Foxtrot, the lift and the twizzles. The Russians skated well in the Free Dance to „Sign of the Times“ by Harry Styles as well and earned a level four for three elements. They were ranked second in this segement, but held on to first place at 165.59 points. Dancing to „In the End“, Kazakova/Reviya won the Free Dance segement with good levels and execution, but remained in second place overall on 165.25 points. The ISU Junior Grand Prix Finalists got their third ISU Junior Grand Prix silver medal. Sofya Tyutyunina/Alexander Shutitskiy (RUS) moved up from fourth to third place to take home their first ISU Junior Grand Prix medal (152.79 points).

„To be honest we didn‘t expect that outcome and we‘re very happy about our triumphant debut. Our first competition, our first JGP and our first victory. This result inspires us a lot to work even more,“ Khudaiberdieva said.