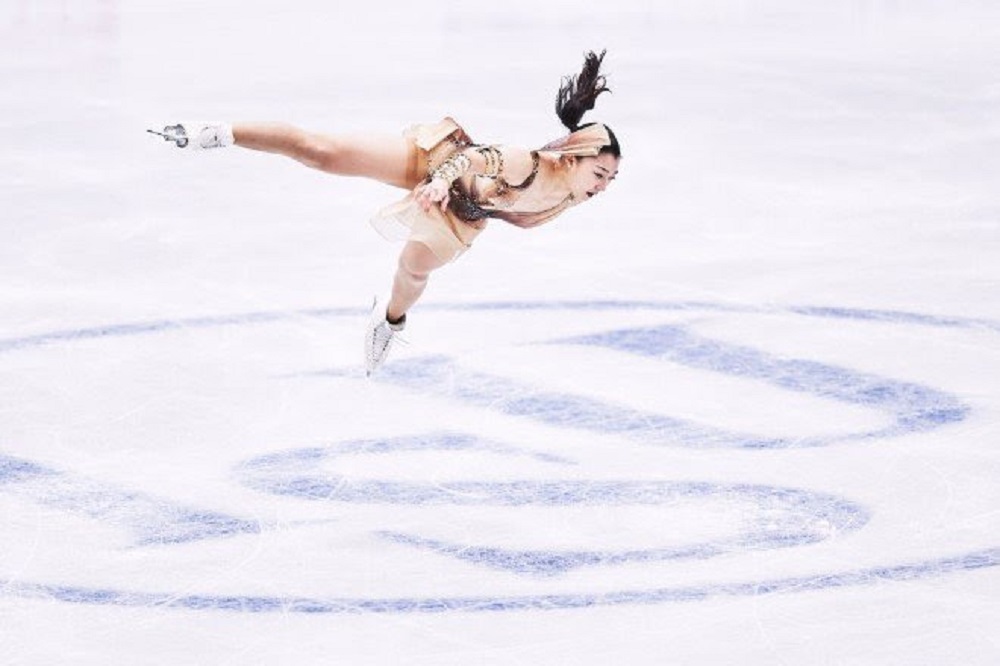 Skating to “Gladiator” by Hans Zimmer, Sakamoto hit a huge double Axel, triple Lutz, triple flip-triple toe as well as level four spins and footwork. The 2022 Olympic bronze medalist impressed with her high speed throughout the performance and set a new personal best of 80.32 points.

“Regarding today's performance, it’s actually the first time for me to score above 80, so I am actually very happy about that. I think my performance was very speedy and I was able to land all three jumps, so I think it’s probably the best performance that I am capable of doing,” Sakamoto shared. “With the Russian skaters no longer taking part in this competition, all of the sudden I was considered to be the gold medalist candidate. In the beginning, because I wasn't really in top form, it was hard for me to try to push myself and I also felt a gap between where I was and where I wanted to be. But over the days my performance started to really pick up and gradually I was able to tell myself it wasn't really the result that counted,” she added.

Loena Hendrickx, who is battling a groin injury, pulled off a triple Lutz-triple toe, a triple flip and a double Axel in her program to “Caruso”. The multiple Belgian Champion posted a personal best of 75.00 points. “I felt really confident on the ice and also my jumps were there and although (because of) my injury I felt like I performed the best I could and I’m really satisfied with everything I did today,” the 22-year-old athlete noted. “After the Olympics, it was not my best performance there, so I wanted to show myself one last time to let the people see that I can do much better and I’m happy I could show it today and that’s why I could hang on until this event. I try to make myself as strong as possible, and not think about the injury and just enjoy.”

Mariah Bell’s performance to “River Flows in You” featured a triple flip-triple toeloop, a triple Lutz and double Axel. The U.S. Champion achieved a personal best as well with 72.55 points.

“I didn’t think about it much coming in — about placements — but I just wanted to skate my best. It’s a huge honor to be in third after the Short and exciting because it has been a little bit of time since that's happened. I’m really looking forward to the Free Skate,” Bell said.

Performing to “House of the Rising Sun” by Heavy Young Heathens, Knierim/Frazier produced a triple twist, side by side triple toe, throw triple flip and level-four steps, death spiral and side by side spin to post a new personal best score of 76.88 points.

“We feel very fulfilled. We’re proud of ourselves for continuing to build at each competition for our second season together. It takes a lot of time to build in the international circuit; I think we’re just doing our best each time,” Frazier said. “We’re very grateful to be here and have a chance to do these programs again. Going out and skating well – skating like we do at practice – is very fulfilling. It’s a nice way to end the season in the Short Program segment,” Knierim added.

Cain-Gribble/LeDuc’s performance to “Nureyev” from the “White Crow” soundtrack was highlighted by a triple twist, throw triple Lutz and four level-four elements. The only glitch came when Cain-Gribble stumbled on the side by side triple loop. The U.S. Champions earned 75.85 points, a new seasons best..

"It was really hard mentally and physically (after the Olympic Games) We reached the peak of what we always wanted to do and it’s kind of hard to come back from that. But you just have to trust your training, trust the people around you to get you through it,” Cain-Gribble told the press. “We've been training really strong all season, we've been building, we've put in so much training, we just want that to show, so we're ready to go out there and execute like we do in practice,” LeDuc shared.

Miura/Kihara opened their program to “Hallelujah” with a triple twist and solid triple toe, but then she stepped out of the landing of the throw triple Lutz. The two-time ISU Grand Prix medalists picked up 71.58 points.

“Although there was one big mistake (on the throw jump) I was determined to finish the program with a smile because it was our last Hallelujah program and think I was able to do that,” Miura noted. “Besides the big mistake we missed some of the levels, the lift - I have to look it over and try to fix it before the Free Skating. The throw jump – after coming out of the dance lift we were not able to pick up the regular speed so the timing for the throw jump was off and that was the mistake,” Kihara explained.

Karina Safina/Luka Berulava (GEO) placed fourth with a personal best score of 67.36 points followed by Vanessa James/Eric Radford (CAN) on 66.54 points. Minerva Fabienne Hase/Nolan Seegert (GER) are less than half a point behind in sixth (66.29 points).