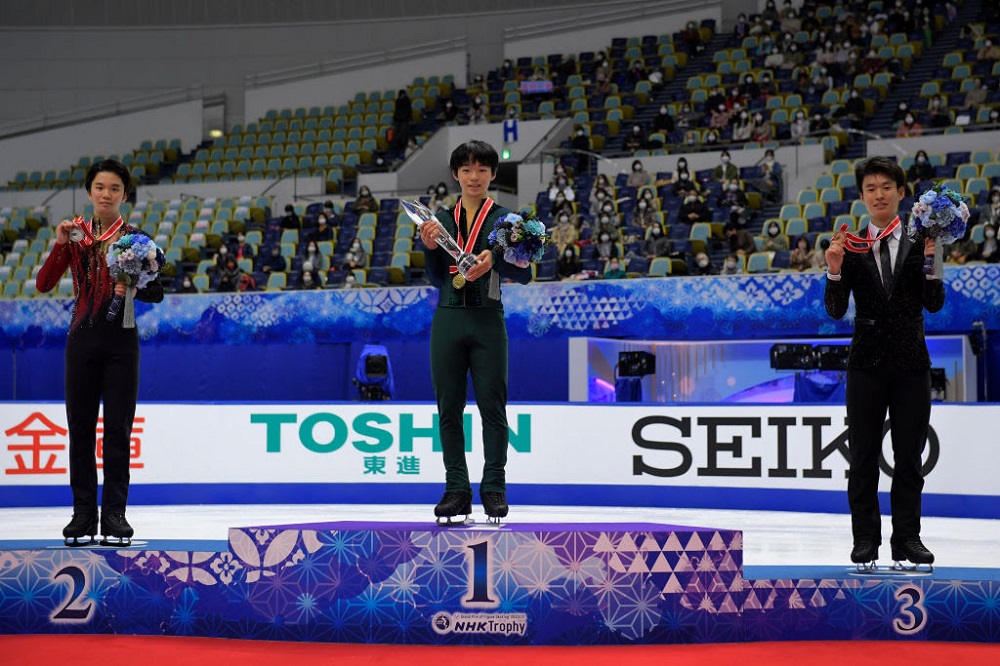 Following a decision of the ISU Council due to the ongoing Covid-19 pandemic and travel restrictions, the Grand Prix events are primarily domestically run events with domestic skaters and skaters who train in the host country or respective geographical region competing. Except for Korea’s You, only Japanese skaters competed at NHK Trophy. No Pairs event was held. Overall, 28 skaters/couples that represent two ISU members competed at NHK Trophy.

Overnight leader Sakamoto skated last and ended a high-level Ladies competition on a high note with an exciting performance of her innovative program to “The Matrix”. The 2018 ISU Four Continents Champion reeled off a triple flip-triple toe, triple Lutz, Salchow, double Axel-triple toe-double toe and triple flip-double toe. Her spins and step sequence garnered a level four. Sakamoto crushed the competition with her Free Skating score of 153.91 points and totaled 229.51 points.

“Last season I was not able to skate this program clean, because I lacked stamina. During the six weeks quarantine I worked hard off the ice and it paid off. It was tough, but I told myself I need to go through it. I never want to feel the same I did last season,” Sakamoto said.

Higuchi opened her characteristic Flamenco routine with a slightly underrotated triple Axel and followed up with a triple Lutz-triple toe that was also slightly underrotated. She landed three more clean triples and got a level four for two spins and the footwork. However, the 2018 World silver medalist left some more points on the table when she doubled a Salchow and a Lutz. The 19-year-old was ranked fourth in the Free Skating with 131.27 points, but remained in second overall at 200.98 points.

“The triple Axel made me really happy. Finally I landed it in competition,” Higuchi noted. “I was able to link into the next jump so that was good. However, it was difficult to maintain my focus since I was getting tired so I will need to improve that for Nationals,” the Tokyo native shared.

Matsuike, who just had turned 16 last month, put out an inspiring performance to “Perhaps Love” by Jones Denver that featured six clean triples including two triple-triple combinations in the second half of the program. The newly minted national Junior Champion scored 133.23 points in the Free Skating and accumulated 198.97 points to make the podium in her international senior debut.

“I have always aspired to be at NHK Trophy. So to come here and be on the podium is like a dream come true. It is something I’ll never forget and it is a real confidence booster for me,” Matsuike told the post-event press conference.

2017 ISU Four Continents Champion Mai Mihara (JPN) moved up from seventh to fourth place with an inspiring performance and 194.73 points. Mako Yamashita (JPN) went for a quad Salchow, but it was not clean and downgraded. She slipped from third to fifth at 186.13 points. Mana Kawabe (JPN) finished sixth. 2020 Youth Olympic Games Champion Young You (KOR) pulled up from 12th and last place to seventh (181.73 points).

Komatsubara/Koleto delivered an enchanting performance to “Une histoire d’amour”, producing level-four twizzles, lifts and a level-four spin. The midline step sequence merited a level two while the one foot step sequence was rated a level two for her and a level three for him. The husband-and-wife team scored 108.29 points which added up to 179.05 points overall and thus turned their love story into gold at NHK Trophy.

“I am very happy and proud we skated two powerful programs,” Komatsubara shared. “Yesterday, the distance between us was what we worked on and we discussed it although the morning practice didn’t go that well. So we are being more professional,” she added.

“It was difficult to do on-line (training) lessons and we want to work harder but it felt great,” Koleto pointed out.

Performing to “My Funny Valentine” and “Feeling Good”, Fukase/Cho picked up a level four for the twizzles, two lifts and the spin. The National silver medalists were awarded 94.43 points and overtook Muramoto/Takahashi with a total of 157.89 points.

“All the lifts went well, but we made some mistakes we should never make. Being in a real competition was great for us,” Fukase noted. “It was a pretty good performance for us, but we do have some parts to work on. With the Nationals coming up soon we will work hard to improve,” Cho commented.

Muramoto/Takahashi delivered a balletic dance to “La Bayadere” by Leon Minkus. The 2018 ISU Four Continents bronze medalist and her partner picked up a level three and four for their combination lift and another level three for the stationary lift. The only major glitch came when Takahashi, the 2010 ISU Single Skating World Champion, stumbled on the twizzles. With a Free Dance score of 93.10 points, Muramoto/Takahashi just slipped behind Fukase/Cho at 157.25 overall.

“We are happy to have made our debut,” Muramoto said. “We were calm but made mistakes we never do, so there are many things to work on, but I feel that we can do better in the next competition. We are a team that has just started. We are all excited and coaches are telling us that we will bring a new breeze into this world so we are just excited to have started”, she continued.

“In today’s Free Dance, I made a mistake and I hate that,” Takahashi admitted. “Even in practice I don’t make such a big mistake on the twizzle and other mistakes in the transitions. So I guess that is what the competition means.”

Tomono’s expressive program to “Moulin Rouge” featured a quad Salchow-double toe, a triple Axel and two more triples as well as difficult spins. However, the ISU World Championships competitor doubled two jumps and singled an Axel. He got the third-best Free Skating score with 143.35 points and remained in second place at 226.62 points total.

“The practice and the warm up felt good, but at the end I was not aggressive enough,” Tomono observed. “I was too careful and jumps ended up as doubles. I need to trust my training more. I want to be more confident and for that I need to train harder,” he continued.

Skating to a James Bond Medley, Honda popped his first Axel into a single but recovered to complete seven triples. The Japanese Junior Champion was ranked sixth in the Free Skating with 138.34 points, but held on to third place at 217.56 overall.

“I was surprised I was third yesterday and today I know that if I am in first after my performance, I would make the podium. My Free was not that great but I was surprised again,” the 18-year-old commented. “I didn’t really worry about the placement today. I just wanted take in the atmosphere here with the audience.”

Keiji Tanaka (JPN) missed the podium by just two points to come in fourth place at 215.52 points. ISU Junior Grand Prix Final Champion Shun Sato (JPN) moved up from seventh to fifth place on 214.75 points ahead of Kao Miura (JPN), who came from eighth to sixth and ranked second in the Free Skating (210.53 points)